The Riot Act: it takes a village

Last month’s riots implicated every one of us - especially those at the top. It also brought to mind an old community-minded rule of law

How did your building site do in those riots? Or maybe it wasn’t a riot; maybe “just” a burglary. And how is that insurance policy standing up? I looked at JCT and became flummoxed by the gobbledegook. I looked at NEC and could instantly see that riot is an employer’s risk unless someone twiddled with risk allocation at the outset. Then I said a prayer: “Oh, please save me from the world of insurers”. And then I reflected on those kids running away with a pair of trainers, a T-shirt, an empty can of petrol. And then I reflected on what example their mums and dads had set to the kids. And then I reflected on what example members of parliament had set. I reflected on how well the people at the top behave, what moral compass they give to the kids. The moral compass of the bankers, the press, the city, the police, the unions, the clergy, the people running the Irish, Greek and Portuguese economies, and the leaders Gaddafi, Assad and Mugabe? I even thought of what good example Prince Charles sets, never mind our Boris …

Riot has played on our minds for as long as ever was. The Riot Act came into force 300 years ago. One hour after it was read out loud by a magistrate to a group of 12 or more people, arrests would follow. The punishment was penal servitude for not less than three years. Wow! The Act was replaced in 1986 by the Public Order Act. But the 1886 Riot (Damages) Act is still in force today. It works like this: assume your building site is set upon by people “riotously and tumultuously assembled together”. Your company is entitled, if you are quick about it, to make a claim for the cost of repairs and renewals from the local police authority. If you are insured, the insurer is entitled to claim what he pays out to you from the police authority.

In 2002, the Yarl’s Wood Immigration Detention Centre, near Bedford, was torched in a riot. The newly built centre (a prison) is owned and operated by the private contractor Group 4. The repair bill was £32m. It held its hand out to the Bedfordshire Police Authority for the injury, stealing and destruction. The authority said it was not liable. The judge at trial agreed. But the Court of Appeal reversed him. The local authority carries the can. How come?

The rule of English law goes back a long way. The Statute of Windsor of 1285 is a beautifully simple device. If a robbery took place, the local people called “the hundred” (a hundred families) were answerable for any such robbery unless “the bodies of the robbers” were produced. So the community was made responsible for the mischief of the few. By 1585, the statute of hue and cry was made. It entitled “the hundred” to claim over against an adjoining hundred after a “hue and cry” was made on that adjoining land. Do you see the idea? It was and still is a strong incentive for local people to do what they can to prevent any mischief from arising. And so it is today. The local people (the local authority), through local taxation
is the modern hundred. It is to do everything to stop what happened at Yarl’s Wood and for that matter in Tottenham and Ealing and Croydon. The people of those districts are to pay up compensation through the police authority.

The 125-year old Riot (Damage) Act is strict liability, not dependent upon fault or want of policing or negligence by police or fire or ambulance. No need to ascribe blame. The rationale is to express a commonsense view that it is up to the inhabitants of the locality and those injured by bad behaviour to assist in the preservation of peace and share the burden both of keeping the peace and the misfortune of loss or injury. Strict liability of this type puts those who are likely to compensate in the shoes of the wrongdoers themselves because their strict obligation is to prevent what has happened from happening.

So, the awful behaviour of MPs who fiddle or defraud and set a bad example is yours and my problem. We are the local “hundred” and we cop it until, ah ha, we bring in the bodies. Well then, bring them bodies in, and the bankers and more besides. Just line them up … or else the hundred carries the can, for the T-shirts and trainers and cans of petrol. Come on, you high and mighty lot at the top, start setting a good example. 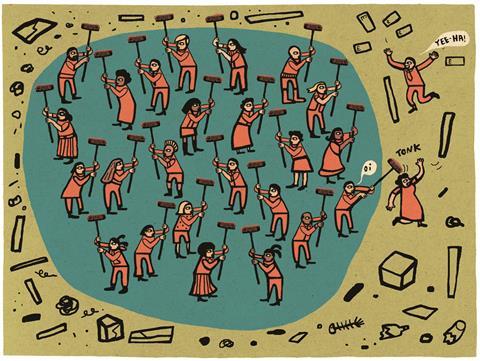