Oral agreements: All mouth no trousers

It’s easy for two parties to get dug in over quite trifling sums. Here’s a case in point that revolved around the question of oral agreements - only the lawyers enjoyed it

There is a tricky technical point in this adjudication case. The lawyers will be tickled pink; the constructors will raise an eyebrow. Cain Electrical contracted with Pennine Control Systems to carry out cable works on the Humber Bridge; a modest job worth £57K. They fell out about payment or rather non-payment of two invoices and Cain called for an adjudicator. Pennine got excited when Cain claimed in its paperwork to the adjudicator that there were one or two oral agreements in the contract not recorded in the written purchase order. It was a sort of gotcha, over and out move because Pennine then told the adjudicator that he should leave the pitch. The rule (until very recently) is that all the material terms of the contract, whether relevant to the issues in the adjudication or not, have to be in writing. Yes, yes, I know it is a half-baked unrealistic rule and doesn’t reflect the real world of commerce but that’s what parliament is said to have meant by the words in the Construction Act. Eyebrows galore were raised and the lawyers were again tickled pink.

Where were we? Ah yes, clear off Mr Adjudicator, said Pennine because there is no right to adjudicate in this instance. Everyone spends a small fortune at this stage to get a non-binding decision from the adjudicator. Almost always the adjudicator refuses to go away. That’s what happened here. He said there was a contract in writing, so he would press on. Now, I reckon this fellow was right to stay. Cain had said there was an oral term and Pennine said there wasn’t. And given there was an all-singing, all-dancing purchase order referring to all sorts of documents, there was, on the face of things, a pukka construction contract in writing. Pennine’s argument that it was not a contract in writing because of oral terms was immediately contradicted by Pennine arguing that the oral agreement was never made. Do you see why lawyers get tickled pink by all this ballyhoo?

So the adjudication, now a very ordinary adjudication, went ahead. Pennine came a very good second and was ordered to pay out to Cain. It only involved £13k or so but they refused to pay. Cain came to the High Court to enforce the adjudicator’s award. Do you see how parties become dug in? Do you see how folk are treating adjudication as though it is something much more than a look-sniff pro-tem decision, as to who will hold the money until properly decided? The High Court judge now had to get his head around all this. Quite right. He ignored the non-binding decision of the adjudicator and began afresh to fathom if this is a contract in writing.

The purchase order was quite a detailed document; it had all the appearance of a contract in writing. When the adjudication began, Cain’s managing director attached a witness statement pointing to the oral agreements. They were about the machinery for payments. He said they had verbally agreed that invoices rendered on the 16th of the month were payable on receipt. The Cain referral in the adjudication relied on that or alternatively would rely on the Scheme for Construction Contracts. So in the High Court, Pennine argued that since Cain relied on an oral term there was no jurisdiction to adjudicate. The barrister for Cain effectively argued that it made no real odds what was argued in the adjudication. In any event, Cain no longer argued that the oral agreements arose. So, in effect both Cain and Pennine now took the position that no oral agreements were ever made. And if it did make some difference as to what was argued in the adjudication, the barrister pointed to the notice of adjudication, which said: “The scope of this claim is to determine the claimant’s right to payment for work carried out in accordance with the contract.” That’s exactly what the adjudicator did and furthermore he said he did not agree the oral agreements were terms of the contract. He decided that the terms in “the Scheme” applied. The smart thing about withdrawing any notion of there being any oral agreement is that there was nothing to argue about. The judge said he would immediately enforce. Mind you, it would have been more fun if the adjudicator had decided the dispute on the existence and effect of the oral agreements.

Fascinating that Pennine felt so strongly about this tiny sum in dispute that it sought permission to appeal. Lord Justice Jackson refused. It would be better for Pennine to pay up and give themselves a talking to about proportionality. 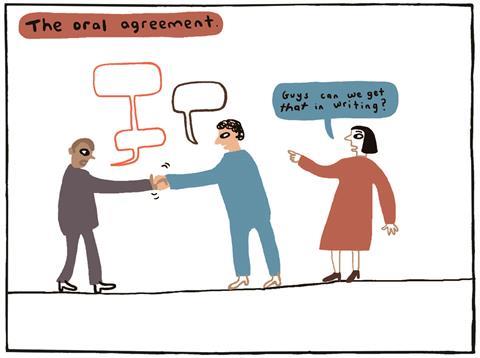 Tony Bingham is a barrister and arbitrator at 3 Paper Buildings Temple. For other articles by Tony, click here