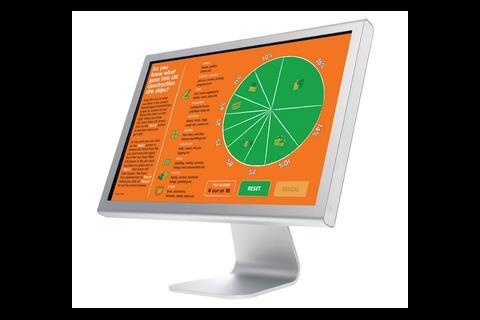 A waste disposal game: The “friends and family” edition of Willmott Dixon’s sustainability DVD puts the user in the chief executive’s chair. 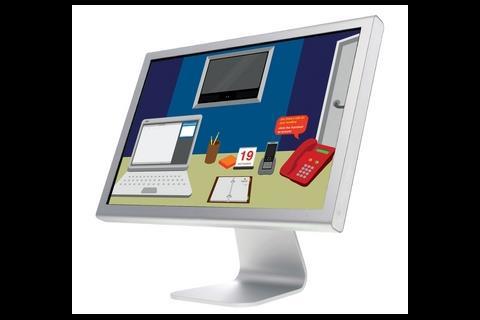 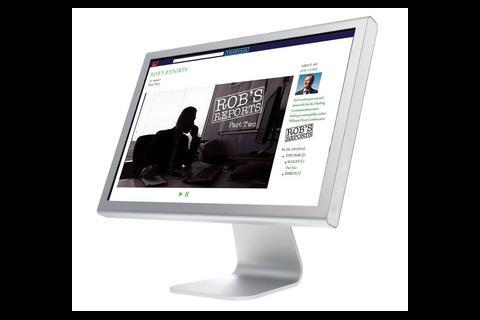 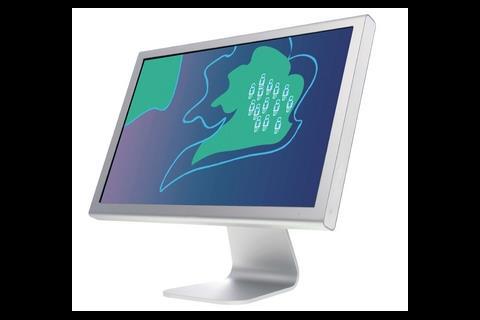 Decisions taken in the CEO role-play must balance sustainability goals and economic survival.

Allowing companies to offset employees’ energy savings at home towards corporate carbon reduction targets was an interesting proposal in the Conservative Party’s housing green paper, published in May. Some might think it rather Orwellian: not only would your employer be nagging you to turn off lights and drive a smaller car at work, it would be pestering you to insulate the loft too.

And yet, as contractor and sustainability consultant Willmott Dixon has found, staff may well be more than willing to take the workplace drive for sustainability home. In response to requests from staff, it has created a “friends and family” version of a two-hour training DVD about sustainable development. Users play the role of CEO in a virtual version of the firm, receive information via various media and are asked to make difficult decisions relating to sustainability and profitability.

Willmott Dixon wants the world to know it’s serious about sustainability. Chief executive John Frankiewicz has set some pretty tough targets, including carbon neutral and zero waste to landfill by 2012. Already every project is being assessed under a 10-point sustainability list including items such as BREEAM design, life cycle costing, recycled content and local community projects.

The firm has a record as an early adopter of new thinking in construction. In the 1990s, it was a pioneer of partnering, recruiting Sir Michael Latham, author of the 1994 report “Constructing the Team”, to its board as a signal of intent. Now it has Jonathon Porritt, founder of Forum for the Future and chair of the UK Sustainable Development Commission, as a non-executive director. As well as his experience and connections, Porritt’s name and face all strengthen the sustainability message.

Willmott Dixon’s 2008 report “Everyone Plays a Part” is an indication of the efforts it is making. Having worked hard to define what sustainable development meant for the firm, the next step was to let its people know about it.

Doing this via DVD, rather than the traditional roadshows, won hands down as the method of dissemination according to Andrew Frost, head of Willmott Dixon’s in-house sustainability consultancy

Re-Thinking, which developed the training. It took the company 18 months to roll out the partnering concept with roadshows; this took three weeks. The DVD also saved 54,000 miles of travel and meant that staff didn’t have to be pulled off projects.

In September, all 800 members of staff were given three weeks to complete the training, which can be done in one sitting or in chunks. Reminder emails from Frankiewicz ensured all but 11 staff participated.

The DVD is surprisingly gripping. After a rather worthy introduction by Frankiewicz, chairman Rick Willmott and Porritt, things get interesting. A huge amount of information about sustainability issues generally and the company’s approach are delivered via animations, video reports and games.

The most enlightening element is the emails, which you, as virtual CEO, have to respond to. One of the key messages of the DVD was that decisions on green issues have to be made in a business environment, says Frost. “We wanted to introduce people to the bigger picture. Sometimes you might want to do the right thing, but you can’t because you have to do what the board tells you.”

Willmott Dixon designed and made the programme with the creative division of Re-thinking, Re-Thinking Communications. Frost won’t say how much it cost, only that compared with the old-fashioned face-to-face method, the company saved £100,000.

The DVD seems to have done its job educationally: Willmott Dixon gained an impressive third placing in the Sunday Times Best Green Companies list (published on 26 May) and was the highest placed construction company. The ranking is compiled from a combination of two surveys, one on management policies and an employee questionnaire: 87% of the firm’s staff believe its environmental commitment is very serious.

Educating employees is one thing, educating their families quite another. Frost says it was only when people started asking for a version to take home that his team developed one. This was sent out to everyone earlier this year. He says it fosters discussion and debate, encourages people to do more and to learn more, and raises understanding of the issues and of the leadership role Willmott Dixon is taking.

Construction manager Sean Herbert wanted to take the DVD home because he thought it would be interesting for his children. His nine-year-old daughter skimmed over most of it, he says, but loved the game where you have to match materials wasted to the pie chart. “She was really interested in what we can do to reduce waste and what we can do to recycle it,” says Herbert. “She looked at the hazardous waste and said ‘there must be something we do with that’. It really gave me another view of the whole thing.”

One of the messages is that green decisions have to be made in a business environment. Sometimes you might want to do the right thing but you can’t because you have to do what the board tells you.

Sarah Dibley, a business development manager, persuaded her partner to view the DVD because she had been enthusing about it [see below]. He is a diver, so issues impacting on the environment such as water pollution interest him, she adds.

Having developed the friends and family version, Re-Thinking is now putting together a version for Willmott Dixon’s supply chain. Members will soon be asked to sign up for the training as part of the conditions of contract. And Re-Thinking is keen to spread the word by developing versions of the training for other construction companies – for a fee, of course. This is a sustainable business we’re talking about, after all.

Sarah Dibley – “I would be very green but I wouldn’t make any money.”
“I’ve always been a bit of a greeny. Willmott Dixon’s attitude towards sustainability was one of the reasons why I joined the firm a year ago,” says Sarah Dibley, business development manager for the North West, who took the DVD home for her partner.

“Sustainability is part of the whole ethos of how they work. And their HR department is very good at marketing those things to people.

“I liked the whole interactiveness of the DVD. I’d never done anything quite like it before. It got everybody talking.

“They were asking ‘How many planets do you use then?’ [a measure of carbon footprint] and asking what sort of managing director you would become.

“I realised that the way I would run a company would be very friendly and very very green, but I wouldn’t make any money. You have to balance the green issues with keeping everybody in a job.

“I also learnt a lot of technical stuff. I spend a lot of time talking about the goals Willmott Dixon has, but never really think how you do that.

“There’s one exercise where you are given a pie chart and you have to fit the right materials to the percentages recycled on site. I got that completely wrong!

“Being a marketing person myself I understand that how a company displays itself is not always backed up by how they behave.

“Being able to go through something like this is real proof that every senior person is committed.

‘Everybody Plays a Part’ [the 2008 sustainable development report] is the one thing I hand out to every single client, because it really proves what we are trying to do and shows that we are different.”