What effect will the latest batch of carbon reduction measures have on building design? And how much more will it cost to meet the stricter rules? Building finds out and calculates the price of four Part L-compliant options for a City of London office

Part L is being updated at a time when awareness of the threat posed by global warming has never been higher. The 2002 revisions signalled an important shift in emphasis from energy conservation to control of emissions of carbon and other greenhouse gases. The proposed update will build on this foundation, reducing carbon emissions from new-build further, and widening the scope of work required to improve performance in existing buildings. In raising standards, the approach has been to give maximum flexibility to owners and designers in selecting means of compliance.

The policy impetus behind the updating of the regulations has come from both UK and European sources. In the UK, the key drivers have come from the energy white paper Our Energy Future, published in 2003, and the Energy Action Plan, dated 2004. From the perspective of construction, the key issues identified in the white paper include: 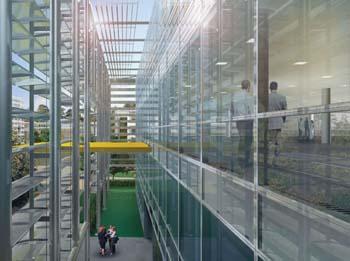 The European dimension comes from the European Building Performance Directive (EBPD), which will come into force in January 2006 and which has dictated the timing of the Part L update. The directive has many components but the key issues, from the perspective of the Building Regulations, include:

The directive must be implemented in January 2006 or the UK will be fined by the European Union. However, there is a three-year grace period for the introduction of inspection activities, if trained inspectors are not in place. It has been suggested that the new housing minister, Yvette Cooper, may alter the regulations and delay their publication and implementation. Elliot Morley, the environment minister, recently stated in the House of Commons that the regulations will come into force in April 2006.

Overall, the effect of both national and European policy has been to establish a long-term commitment to the reduction in building-related energy consumption. This is the most effective means of tackling carbon emissions, which also saves on energy costs and reduces pressure on infrastructure.

In the initial drafts of the regulations, the commitment to emissions reduction covered both new-build and the existing stock. However, it has emerged that provisions to encourage improvement of existing housing are likely to be excluded from the final published version of the regulations.

This article focuses on changes to Part L affecting buildings other than dwellings, examining provisions dealing with both new-build and existing buildings.

The new calculation methodology involves inputting all aspects of the building design into a national calculation tool, called iSBEM (Simple Building Evaluation Method), which is being developed by BRE. This calculation will need to be done fairly early on in the design process and then updated once the design is fixed. This will make it more difficult for the design team to handle changes and, given the resource requirements of recalculation, this could limit design iteration. However, guidelines could be set that would allow some variations without recalculation. For example, if a maximum perimeter heat gain is agreed, the facade can be developed with a number of options that meet the criteria.

Readers can now search our unrivalled four-year archive of Davis Langdon & Everest’s cost models and specific, cost-based project studies, by clicking on the Cost Briefing section of our website, www.building.co.uk. Cost briefing itemises all the articles by subject and includes data correct up to the date of publication.

Overview of the revised Part L

In addition to the introduction of challenging targets for reducing carbon emissions, the new Part L involves some significant changes to current practice:

Impact of the regulations on design

The revised Part L will affect all aspects of the building design. It allows flexibility in design and there are no prescriptive requirements, only some minimum standards. So, in addition to insulation levels, proportion and type of glazing, other factors that may be improved are:

However, to achieve this objective, it has been necessary to adopt a flexible approach aimed at introducing incremental improvements as widely as possible, with their scope being determined on the basis of cost-effectiveness. Changes to the scope of qualifying works include bringing alteration and renovation works within the remit of the regulations, creating a new classification of “controlled elements” so that more work to walls, roofs and floors is captured, together with a broadening of the definition of material change of use.

Initially, buildings with a floor area of more than 1000 m2 will fall under the scope of the regulations. Smaller schemes may also be required to comply with the standards under the provisions of the Sustainable and Secure Buildings Act 2004.

In assessing the scope of work required, the carbon emissions approach can be used to demonstrate that the modified building meets its target. However, in many instances, detailed guidance on what constitutes best practice on an element-by-element basis will be used to demonstrate compliance. In the absence of an emissions assessment, tests of reasonableness based on technical risk, practical constraints and cost-effectiveness based on a seven-year project period will be used to determine an appropriate scope of work.

The assessment of the appropriate package of improvement works is likely to become a balancing act between ease of implementation, effectiveness in carbon reduction and capital cost. The energy survey – carried out as part of the project to identify and assess opportunities – will be a key aspect of this process.

Isolating the costs of energy improvement initiatives and calculating marginal costs for cost-effectiveness assessments at an early stage of design is likely to be challenging and will be open to interpretation. On the other hand, the risk of cost overrun associated with energy improvement measures will rest with the developer.At this stage, it is difficult to predict the impact of the provisions of the regulations on the alterations and refurbishment market. The proposed 10% cost ceiling on improvement measures may prove to be a disincentive for further investment in existing fabric – potentially affecting the timing and viability of schemes and accelerating the obsolescence of some buildings. There is a substantial learning curve for both designers and inspectors in determining an effective balance between project feasibility and emissions control, which may lead to the adoption of less-than-perfect solutions during the early phases of the implementation of Part L.

The indications set out in the proposed document on future thinking are that the following changes will be introduced at the next review in 2010:

This cost model is an evaluation of the extra over-cost of achieving 2005 Part L compliance based on different combinations of facade solution and building services installations.

The cost model is based on a generic air-conditioned office scheme in London. The gross internal floor area is 9300 m2, net-to-gross efficiency on office floors is 85% and the wall-to-floor ratio is 0.35. The notional building has 40% glazing in clear double-glazed units with a low-e coating. Solid insulated panels are located behind back painted glass units. All other design criteria and standards are taken from appendix B of the regulations.

Four options show how the 2005 regulations can be met using either 40% glazing or different combinations of 100% glazing and solar shading. All options are constructed from unitised curtain wall, featuring a combination of double glazing and solid panel. The double wall facade is an externally ventilated narrow-cavity unit. The key performance criteria table sets out the main differences between the options.

The results of the model show that for buildings with a low proportion of glazing, improvements to the glass specification, services plant efficiency and the introduction of simple heat recovery measures will actually result in a small reduction in capital costs resulting from the reduction in heating and cooling loads and plant sizing.For options with 100% glazing, solar shading to the affected facades and more efficient cooling, based on a water cooled chiller, are the key measures to reduce emissions. The combination of high-performance glass and fixed solar shading provides the most cost effective solution. However, in this option, natural light on office floors may be limited as a result of the heavy shading. The most expensive option uses motorised external louvres, a solution that is not used widely in the UK. Option four, the double wall facade – in this case a narrow profile system without access walkways – emerges as a cost-effective, practical solution, occupying a relatively narrow cladding zone and having buildability benefits related to unitised construction. In use, the cleaning and maintenance of both glazing and blinds is easier with the double wall facade, albeit that regular access for cleaning from lettable space has to be provided, which may have some impact on the fit-out and use of office space.

The costs in the model are at third quarter 2005 prices based on a central London location. The base building costs include the category A fit-out, preliminaries and contingencies. Costs of demolitions, external works, tenant fit-out, professional fees and VAT are excluded.

For more on all the regulatory changes coming up, see our Regulations supplement, free with this issue

Peter Williams and Katherine Holden of Arup have collaborated on the production of this article and in particular have provided the thermal models upon which the cost models have been based.