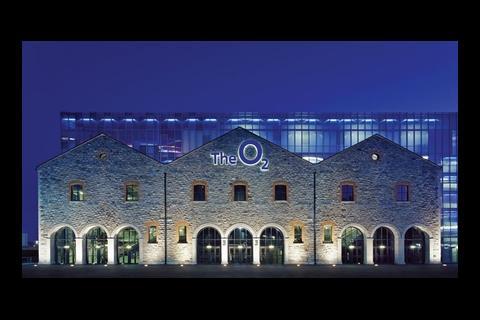 The Dublin 02 was designed by architect Populous and opened at the end of last year. It was created from an old warehouse on the quayside 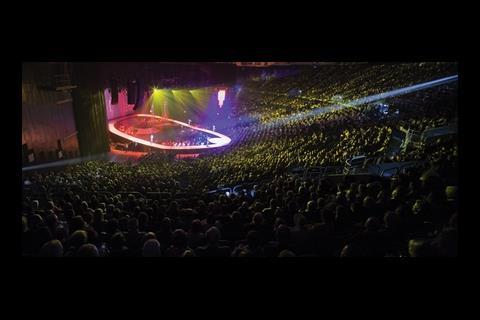 The main challenge at Dublin was creating an elliptical bowl with a maximum capacity of 14,000 people, while retaining the features of the listed warehouse 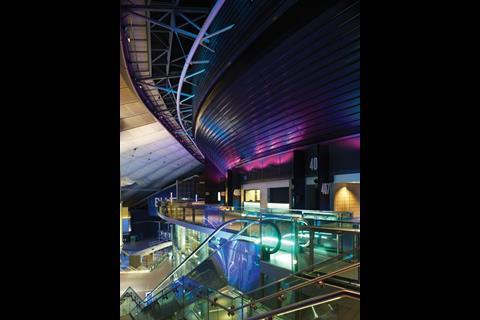 The London 02 was also designed by Populous, formerly known as HOK Sport. There are restaurants and a cinema in the concourse surrounding the main auditorium which sits in the centre of the old millennium dome 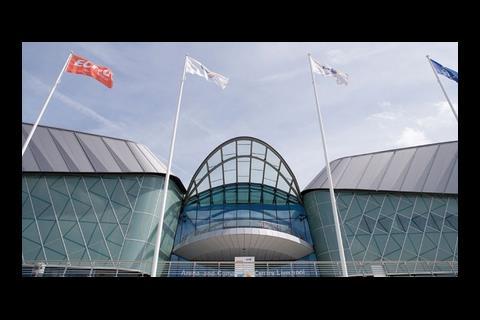 Kings Waterfront is the largest single development on Liverpool’s waterfront and consists of an arena on one side and a convention centre and exhibition space on the other, with the entrance in the centre. It was designed by Wilkinson Eyre 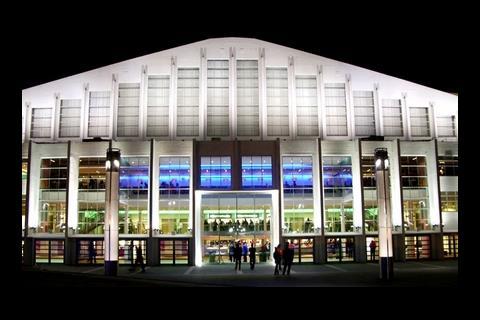 Wembley Arena is the second largest indoor arena after the 02. Built in 1934, it was refurbished in 2006 as part of developer Quintain’s regeneration of Wembley. The refurbishment was designed by the Tooley Foster Partnership and PRP Architects

Even in recessionary times, entertainment creates opportunities and in the live music business, promoters want new, purpose-built venues. Simon Rawlinson and Martin Jennings of Davis Langdon examine how gigs are changing the face of the indoor arena

Large indoor venues have become part of the set of “must have” facilities that major cities in the UK and Europe need in order to compete for international business. Cities with modern, well-equipped arenas can position themselves on the international circuit of events and concert tours, providing entertainment opportunities for their communities and promoting themselves as being major players on a world stage.

Projects such as the Liverpool Echo arena have been conceived as part of large, complex and long-term regeneration programmes, often kick-starting a wider cultural renaissance, bringing visitors and an increased spend into what are often underused areas of a city. Arenas are ideal regeneration projects. They are popular with the public, benefit from existing transport nodes and are large enough to create critical mass for following phases of development. The MEN arena in Manchester, built on the site of an underused train station, was developed as part of the city’s original Olympics bid, and has subsequently played a major role in the wider renaissance of the city.

The original arena concept was imported from the US, having been developed in response to a commercial model focused on sport – particularly ice hockey and basketball. Originally, an arena typically needed two home teams to be able to generate sufficient revenue for viability. These sports have benefited from the development of large-scale, purpose built facilities but the profile and the fanbase necessary to secure long-term financial security has been slow to develop.

By contrast, the other main user of large-scale venues, live music, has gone from strength to strength – particularly as touring has become the principal means by which musicians generate income. Demand for tickets for the most popular performers appears almost insatiable, providing developers and operators with a very attractive business model. The O2 arena in London demonstrates this shift very clearly, as although the arena is sized to accommodate major sporting events, it has no resident teams and focuses almost exclusively on live music.

As music and entertainment has become the major driver behind arena attendance, the approach to design has become more flexible, and looking forward, there is likely to be more innovation in the sector, focused on sizing the venue to target markets, creating the right atmosphere, and optimising the efficient operation of the venue.

02 / The evolution of the arena

Arena venues are evolving rapidly, driven by spectators’ quality expectations and demand for a wide range of services, together with equally high expectations from artists and crew for production and operational support.

Over the past decade, flexibility has been seen as critical to the success of a venue. In the case of the Odyssey arena in Belfast, the scheme includes a running track and an ice pad in the design, which had a significant impact on the building layout, structure and development cost. As commercial income streams become more secure, developers can make their buildings more specialised. In the current economic climate, the credibility of the business model is vital in securing bank funding. Tapping into the seemingly recession-proof live music market is the best way of demonstrating viability.

For venues focused on events and the live music market, the following drivers have become important:

The O2 Arena in Dublin provides a clear indication of how design trends are evolving in venues which focused mostly on music events. It has a “super theatre” auditorium planned as a fan rather than as a U shape. This means that a 14,500 maximum capacity crowd can be accommodated with maximum sight lines of 60 metres, with all of the audience having direct views to the stage. Given that standard ice pad dimensions are 60m by 30m, the new-style arena is intimate and space efficient, getting the audience much closer to the action. In another indication of emerging trends, the venue can also be reconfigured to accommodate an 8,000-strong standing audience.

Arenas are large, functional buildings. The challenge for the project team is to design them from the inside out to optimise user experience and operational efficiency, while producing an architectural solution which provides an appropriate landmark, without dwarfing its neighbours. The Liverpool Echo Arena, located on a prominent riverside site, demonstrates that high design quality can be achieved with these functional buildings.

From a strictly functional point of view, the key determinants of the design are as follows:

From a design perspective, the creation of atmosphere, spectacle and excitement in the auditorium contributes to the communal experience of large, shared events. The arrangement of the bowl to optimise sight lines, reinforce the sense of being in a crowd and also achieve high levels of safety and security is a big challenge. The other major consideration concerns the impact of an arena building on its surroundings, both as probably the largest building in the area and also a venue that will attract large crowds. Solutions that can be adopted to mitigate the impact of the development include:

The main determinants of the cost and efficiency of an arena relate to the size and complexity of the structure. Secondary factors will include the extent of front of house accommodation and the extent to which it can be incorporated into the tier structure. Other site-related factors may include the space for and location of back of house facilities and the extent of requirements for cut and fill across the site.

Given the highly functional nature of most arena buildings, there is only limited possibility to influence the overall cost of the solution once the arena layout has been determined. The external envelope solution is one opportunity, but given the prominence of many arena buildings in central locations, and their role as civic landmarks, investment in build quality is an important aspect of the scheme.

Arena developments are large and complex projects, and are frequently joint ventures between developers and local authorities, which typically own the land and have wider regeneration objectives. Arena projects also benefit from the close involvement of the operator, who will be involved in determining all aspects of the arena design – in particular, the efficiency and flexibility of the building in operation. Venues that do not receive this input during design and construction may suffer in the events market as a result of not offering promoters the right facilities.

There are only a small number of consultants and contractors in the UK with a strong track record in arena development, which has the advantage of giving clients confidence in technical delivery, but means that capacity limitations can be build up very quickly when markets are busy. The capacity challenge has subsided in recent years but could re-emerge quickly.

Given the specialist skills and the high level of contractor design in elements such as substructure, structure, envelope and show systems, arena projects tend to be let on a design-and-build basis. This suits clients on these large projects, who have less need for tight control on the design of their buildings than some commercial developers might require to differentiate their buildings in the office or retail sectors.

In the current market, one of the major problems facing clients is the potential failure of specialist trade contractors. While, under the design and build route, the liability for these events rests with the contractor, in reality it is in the interests of all parties to monitor the financial health of all parties, with well-backed parent company guarantees being particularly important.

Operators also have a direct involvement in the procurement of substantial elements of technical fit-out in the arena, back of house and concession areas, and contractual arrangements should make some provision for the effective overlapping of these works.

The cost breakdown describes a notional, 10,000 seat, end-stage arena with a gross internal floor area of 22,500m2. The arena features a fan-style seating bowl, with concession space accommodated either in the tiers or in extended concourse space wrapped around the back of the bowl. Back of house space is accommodated in a single-storey block on the event floor level.

The arena bowl features a separate tier for suites and club seats and retractable seating on the event floor – providing flexibility in configuration.

The building is steel-framed, with precast concrete tier units. Large roof trusses will be re-assembled for final lifting on site. The building is clad in a combination of composite metal cladding panels and architectural blockwork.

Prices are current in third quarter 2009, based on a location in South-east England. The rates assume two-stage tendering on a project that would be let on a design-and-build basis. The cost breakdown also includes an indicative cost breakdown of the operator’s fit-out, which would be completed in parallel with the main contract completion by a series of specialists under direct contracts with the operator. No allowance has been made for main contractor management of these works.

The costs also exclude demolition and site preparation costs, external works or services. It is highly likely that a project of this nature would require elements of site remediation and infrastructure reinforcement. Professional fees and VAT are also not included.

Adjustments may be required to take into account alternative specifications, programme and phasing, procurement route and location.