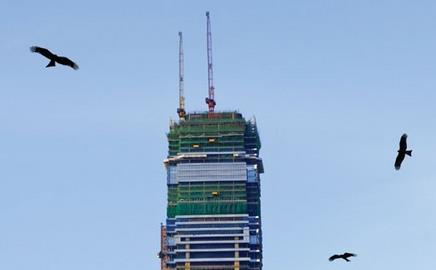 Despite government investment in public sector projects, the construction industry has been badly damaged by the slowdown in China and Macau

China has committed $586bn (£355bn) to kickstarting its economy after falling world demand led to a reduction in exports. The money will be used to support a rapid expansion of government infrastructure spending and policies to revive housing investment. And some of that stimulus seems to be working: house prices in China are starting to rise and real estate sales have substantially increased this year. Meanwhile industrial production was 10.7% up in the first quarter of 2009 and GDP is expected to increase by 7.2% this year with a further rise of 7.6% in 2010. The economic climate in Hong Kong is not as favourable as in the rest of China: industrial production was 10.2% down in the first quarter of the year when compared with the same period in 2008; GDP is also down 16% compared with the same period of last year and is expected to fall 6% during 2009 and only recover by 1.1% next year. Looking ahead, however, the Hang Seng index has rallied 55% to more than 19,000 from a low of 12,000 in March 2009. This may have been influenced by government lending. The outlook for exports in China is poor. In the first five months of 2009, exports dropped 21.8% and imports 28%. Declining imports indicate that manufacturing is slowing, since most of China’s imports are primary products and raw materials that are used for production.

Gross construction output in Hong Kong has remained stagnant for the past four years. However, the Hong Kong construction industry has been affected by reduced workloads in China and Macau. Construction activity in Macau has slowed significantly since the middle of last year, and workload is expected to decline further as the major gaming projects are completed. The Hong Kong government is increasing expenditure on public works in an effort to offset declining private investment and a sharp downturn in Macau’s development. There is a commitment to build 10 major projects at a cost of HK$10bn (£800m). These projects are, in the main, in the infrastructure sector and although the aim is to provide a stimulus to the construction industry, the schemes are unlikely to reach the construction stage in the short-to-medium term and therefore will not compensate for the reduced workload. As a result, the construction industry’s unemployment rate has risen by between five and 11% in the past six months. If Hong Kong is likely to take longer than mainland China to recover, there are some small signs of the situation easing. Housing starts rose slightly in the first quarter of 2009, which could be a sign of a gentle pick-up in activity in the housing market. Balancing this, private commercial and industrial workloads recorded worse quarterly figures, with pessimism caused by lack of available finance and the delays in public sector projects. The outlook for the next 12 months remains downbeat. Construction output is likely to post a double-digit percentage drop over the course of 2009 and a further loss of jobs and skills in the industry is likely. The overwhelming view is that public sector projects will play a key role in any recovery as long as the finance is made available to prevent them from stalling. One of the major schemes on the books is the Guangzhou–Shenzhen–Hong Kong Express Rail Link. The project, which had been on the drawing board for at least a decade, was brought forward by the government in January. Construction will take 12 years and the total cost, which will be wholly government funded, is estimated to be HK$100bn (£8bn). This project alone is capable of boosting the entire region’s construction industry value to a much higher level than was previously forecast.

The private fit-out market may not benefit from the government’s major project expenditure plans since most of the projects are related to infrastructure. The fit-out market is more heavily influenced by investor, developer, retailer and corporate spending patterns. The tightening of the credit market means that investors have struggled to secure capital, developers have lowered specifications, retailers have cut back expansion programmes and corporates have targeted property as a cost-saving target. As a result, fit-out contractors are reporting turnover that is about 30-40% lower than the previous year. The pipeline for medium-to-large fit-out contracts in the third and fourth quarters of 2009 is also projected to be 30-40% lower than in 2008. In response to the reduced workload, contractors have become more aggressive in their tendering strategy. They have reduced overhead and profit targets, discounted subcontract quotes and cut internal costs such as salaries. Design and specifications have also been value-engineered by client and consultant teams. During the past six months there has been an increased volatility in the pricing of common unit rates for key fit-out components. This is influenced by the complex and sometimes unscientific approach to pricing applied by subcontractors. We therefore focus on the input costs of construction to understand better, and better predict trends in construction costs. The falls in tender prices come after three years of price increases, with rises in 2007 hitting double-digit levels. Prices in the first half of 2008 then soared as huge increases in commodity prices were boosted by growth in fit-out contracts in the property market.

Key fit-out commodities such as aluminium, wool, hardwood and sand all experienced corrections of more than 20% as prices fell spectacularly over the second half of last year and into 2009. Commodity prices are expected to continue to fall by up to 5% during 2009 before flattening out and staging a modest recovery in 2010.

Labour rates for general, M&E and specialist workers have been relatively constant over the last two years. However, the labour market is projected to remain weak, with the unemployment rate for construction forecast to increase to 13-14% in the current quarter. As downward pressures on wages increases, site labour rates are forecast to fall by about 3-5% in the rest of 2009, before increasing by 5% in 2010 and 2011.

As contractors respond to a reduced workload attempts are being made to reduce overhead levels from the 3-5% level to 2-4%. Subcontractors have also adjusted prices accordingly. We are expecting that tender return prices will be reduced as subcontract prices. Contractors’ overhead and profit margins are expected to fall in 2009 and remain flat in 2010. Profit targets are expected to be cut from the peak of about 15% to levels that cover one-off risk items.

In the light of anticipated drops in workload, commodity and material prices, labour costs and contractor pricing strategies, it is anticipated that building construction costs will fall during the rest of this year and the first half of next. We expect that prices will then flatten out before showing modest rises towards the back end of 2011.