The backlog of essential hospital works is reaching critical levels

With the backlog of essential capital works growing every year, the coalition risks passing on an estate in a worse condition than 1997 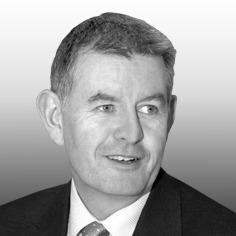 With next spring’s Budget and the corresponding Comprehensive Spending Round scheduled to take social infrastructure capital beyond April 2016 (via the three year planning cycle), it will become increasingly clear to the government, the public or private sector to see why the progress that’s building momentum in the economy will not be enough to halt continuing austerity. The bigger picture could be gloomy for a minimum of at least four more years.

In an era in which government revenue is severely under strain there are some clear indications as to why public expenditure on social infrastructure will struggle. Looking at ONS figures:

·        Debt potentially could get close to 100% of GDP moving forward, depending on strength of the economy

Likewise there has been a clear attempt to slow both investment and government expenditure as the table shows below with expenditure rising slowly over the last 4 years.

Much of this relates not just to debt but to income, which in the recession has dropped alarmingly, exacerbating the problem and further leading to debt reduction measures.

The impact on the NHS Capital Estate

So how will this affect the NHS capital plans? Prior to the recession, health capital expenditure was set to rise. The Treasury original plans had NHS capital expenditure rising from £4.23bn in 2006/07 to £6.34bn in 2010/11 (Source NHS Capital expenditure Table 6 Department of Health). With this reduction in spending, backlog, according to Hansard, rose from £3.7bn in 2006/07 to more than £4.2bn in 2013/14 and whilst part of the problem, this is not the most critical aspect. The table below shows how the expenditure on high risk/critical backlog has been around 31% of the total, with a range in the period between 25.7-35.2%. The period has also been characterised by an underspend for which money is returned to the Treasury. 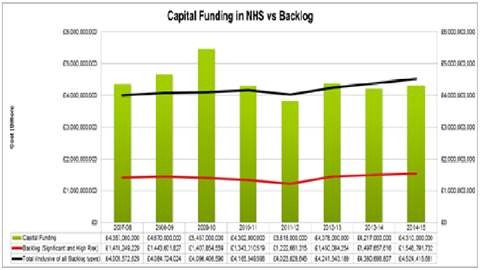 The Department of Health is right to concentrate upon this. Some of the backlog position is on estates the NHS will never use again, or is due to replace via new projects. The total backlog should therefore be looked at keenly/with suspicion. The NHS wanted to spend relatively big a year or so ago - but that got postponed (ie the underspend /money back to the Treasury could have paid off the critical risk and the capital allowances have never materialised to compensate). Likewise rumours abound that the money in Treasury coffers transferring across in 2014/15 for this element will probably be less than half the required amount for high risk/critical elements. These are major failure risks, legionellae, fire, hazardous materials and safety elements, effectively issues that can cause death and injury and lead directors to court rooms. This is an arena in which the continuing consequences of cut-backs could have unpredictable outcomes.

One can postpone investment for a while but the tidal wave simply grows and leads the NHS back to where we were in pre 1997, with distressed assets and hospitals that weren’t fit for purpose. I recently encountered a seven bed bay, a ward of 28 supported by what appeared to be two toilets, something I thought had long gone from the NHS. The issue for the politicians and Department and Treasury staff is simple. One guesses that George Osborne doesn’t want to invest heavily in NHS capital ahead of the next Budget given the state of finances - save an emergency access fund to mop up the highest political issues. And with a growing number, that presumably amounts to three quarters of a billion capital to a billion expenditure straight out the door. With potential £1.5bn of high risk backlog alone next year from £4.3bn total, does this administration want to hand over the NHS to a new administration in a worse state than the £2.8bn backlog in spring of 1997 ahead of Blair’s first administration, whilst successive politicians told us they were “Rebuilding the NHS”?

In EC Harris we are working with around one third of the NHS at any one time. We have been using our Estates Cost model to look at both the real costs of running the estate in line with national performance to give a should cost model for sustainability. We are able, due to our several disciplines, to bring together spatial planning, FM, estate condition, cost and project management to ensure that such opportunities are realised and hospitals are safe. In some cases, projects deliver cost savings, in other cases, it indicates that there is a need to divert money into risk management issues.

In three recent case studies EC Harris has saved £1m a year for one client via PFI renegotiation, reviewed an entire estate to remove more than 9,500m2 of space (and c£750k recurring) and on another cases saved £500k a year which is being reinvested into high risk elements. That had been left unfunded, all of this achieved at no capital cost to the trust. In these projects and several recent schemes the savings have been delivered from initial consultation, and in less than 12 months gestation to operational saving realisation.

In any case, the state of the national estates backlog provides a wakeup call. According to the figures we are only investing around 35% of the critical/high risk  infrastructure needed. Bringing the NHS up to Scandinavian and best performing European levels of healthcare capital investment will not be possible without some access to targeted capital expenditure. Another couple of years of this level of funding and it could place serious risks in the system that should have some Directors of Estates and Board members sleeping very uneasily.

Even if there’s a timetable which is put in place that even starts with a 2016 date, it would be better than ignoring the present evidence. The facts show the estate is getting riskier over the last three years and the risk increases. The media will be the first to highlight any individual failures and the public keen to hold managers to account.