A badge of honour or a certificate not worth the trouble? Liverpool’s loss of its world heritage status has opened a debate about the purpose and value of the designation, particularly in an urban environment in need of redevelopment, Tom Lowe reports

The Liverpool waterfront featuring the Liver Building and, on the right of the photograph, the controversial Pier Head ferry terminal

In November 2011, a group of Unesco inspectors was dispatched from Paris on a three-day visit to Liverpool. They had been tasked with weighing up the future of the city’s World Heritage Site status after proposals were unveiled to build the country’s tallest skyscrapers outside London on Liverpool’s deprived, but listed, north docks.

The £5.5bn planning application by Peel Group was the largest in the UK at the time and would stretch for 2km along the historic waterfront, which once harboured 40% of the world’s trade but had, by the 21st century, become a largely abandoned wasteland. The three inspectors left with a clear message: Liverpool would be stripped of its World Heritage Site status unless the plans were radically changed. Four months later, the council approved them.

The inspectors’ trip was the start of a 10-year battle between Unesco and Liverpool which culminated last month with the city being deleted from the world heritage list – a decision that the council must have known was coming. A report in June by Unesco’s world heritage committee had recommended the move, saying “with deep regret” that new developments on the city’s waterfront had caused a “significant loss to its authenticity and integrity” and that the process of further deterioration was “irreversible”.

The Museum of Liverpool was designed by 3XN and built by Galliford Try. It opened in 2011

Four months earlier, the city council had voted unanimously to approve Everton Football Club’s £500m new stadium in Bramley-Moore Dock. Before the vote, Unesco’s World Heritage Site advisory body the International Council on Monuments and Sites had warned the scheme would have a “completely unacceptable major adverse impact” on the waterfront.

At the centre of the council’s repeated fingers-in-ears approach to the warnings is a tension between the city’s heritage and its need for regeneration. Writing for Building, the new mayor, Joanne Anderson, describes Unesco’s decision as a “bitter disappointment” but adds that she was “simply not prepared” to lose the opportunity to regenerate the north docks – one of the poorest areas in the UK – for the sake of a “heritage label”.

Her predecessor, Joe Anderson (no relation), had described the World Heritage Site status as just a “certificate on the wall”.

In a statement following the decision, Peel Group said that Liverpool’s history remained intact. Describing the listed plots on which its megaproject is being built as “disused brownfield land”, it promised to “show the world that regeneration and the protection of Liverpool’s heritage can happen together”. 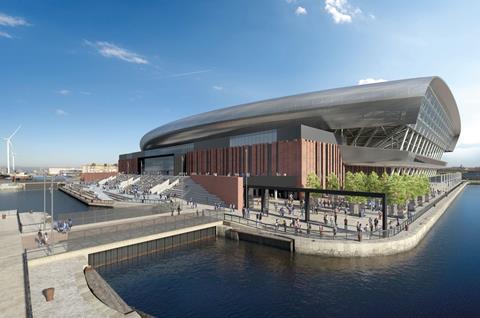 Enabling work on Everton’s new stadium at Bramley-Moore Dock began last month. It will be built by Laing O’Rourke

But these defiant reactions frame the argument as a trade off between regeneration and keeping the Unesco status. For many observers, it is the quality and scale of what the council has approved that is to blame for Unesco’s disapproval.

Sean Griffiths, professor of architecture and cities at the University of Westminster and co-founder of defunct practice Fat, told Building that the loss of the status was an inevitable outcome of Liverpool’s development policies. Griffiths, a Liverpool native, laments how the city’s planners opted for a “sub-Zaha Hadid” approach with a string of museums neighbouring the waterfront’s listed Three Graces buildings in an attempt to create eye-catching landmarks.

The result, he says, has been a “sprawling morass of so-called ‘funky forms’ ” which sit unhappily next to the early 20th-century blocks. “It’s gimmicky stuff, the icon era of architecture. The way we regenerate a city is we do an icon, regardless of what the city’s actually like – but we’re Liverpool so we don’t actually get Zaha Hadid; we get a cheapskate version of it on a design-and-build contract.”

The Dan Meis-designed Everton stadium resembles a “spaceship from a 1930s Flash Gordon episode that has landed on a warehouse roof”, he says. “It doesn’t have to be like that.”

Others think that Unesco was too unforgiving, even if the schemes in question were poorly designed. Architecture writer Owen Hatherley calls the decision “absurd”, arguing that, while Liverpool deserved better buildings, the waterfront is far from ruined.

July 2004  Unesco awards World Heritage Site status to six areas of central Liverpool on the advice of the International Council on Monuments and Sites.

November 2011  Unesco sends three inspectors to Liverpool to assess the viability of the city’s world heritage status. The group warns that the status will be revoked unless the Liverpool Waters scheme is radically changed.

2017  Unesco warns that Liverpool’s status risks being deleted because of the proposed schemes.

June 2021  Unesco report recommends that Liverpool’s world heritage status is deleted ahead of a meeting in July.

The problem, he says, is a view that a World Heritage Site needs to be a place that is “pickled in aspic”. He gives the example of Venice, where more than half of residents have relocated to the mainland since the 1980s. “That should be considered a disaster, but it isn’t. It’s considered a success. You’ve preserved the buildings of Venice; the city of Venice now lives in Mestre. That’s not a success.”

Liverpool, like Venice, saw its city-centre population plummet in the second half of the 20th century. The two formerly dominant maritime trading centres have suffered a strikingly similar fate. But, while Venice now attracts 30 million overseas tourists a year, Liverpool hailed a tourist boom when just 800,000 visited from overseas in 2018. 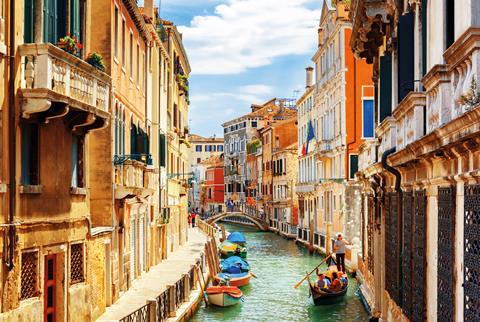 Below: Venice has retained its status but more than 50% of its residents have left the city

Now a debate has erupted over how useful World Heritage Site status is for a city such as Liverpool. Hatherley says that listings should be “more flexible, less tight-arsed and a bit more aware of the problems [they] can cause”.

While the decision can be seen as an embarrassment for Liverpool and for the UK, Unesco might also not emerge from the scrap unscathed. “I think the whole thing’s a clusterfuck and I don’t think anyone comes out well from it,” Hatherley says.

In a blog post written on the day the move was announced, Anderson said the body had “made the wrong call and I think it will hurt them”. As the world recovers from covid-19, redevelopment will play a major role. World Heritage Sites may be more cautious following Liverpool’s loss, but others might look again at their priorities.