12 weeks in the cooler 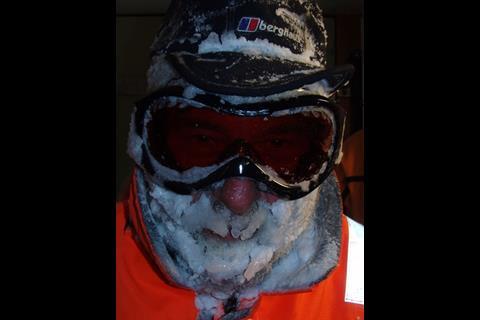 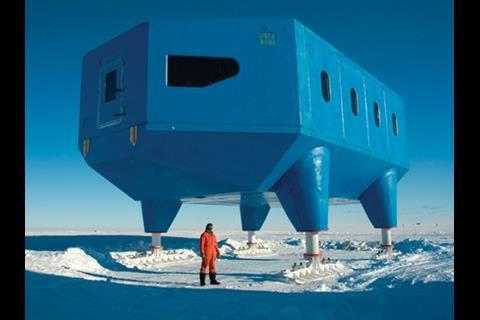 Temperatures of 55°C below zero, no privacy, strictly rationed alcohol … and they’re only a third of the way through the job. Thomas Lane finds out what it’s like to spend a ‘summer’ on site at the Halley VI Antarctic research station

Ten thousand miles from the UK on a 200m thick shelf of ice, possibly the most extreme, and certainly the coldest, construction project in the world is under way. In the winter, temperatures drop to –55ºC and hardly ever rise above freezing in the middle of the summer. When extreme winds blow – which is frequently – it is impossible to go outside because the ice and snow blowing around mean you can’t see your hand in front of your face. Welcome to the construction of the Halley VI research station – soon to be the new home of the British Antarctic Survey (BAS), the group that discovered the hole in the ozone layer.

It is called Halley VI because it has five predecessors. The first four research stations got buried under the 1.5m of snow and ice that accumulate each year, having lasted 10 years apiece. Halley V has done well, lasting 20 years, as its legs can be extended each year by adding new steel sections to them.

But there is a new problem. It is situated on a tongue on the Brunt ice shelf, which breaks off every 50 to 60 years. “There is a high risk of it breaking off in 2010 and Halley V will then flow out to sea,” says Karl Tuplin, BAS’ project manager for the job. “This gave us our deadline for the new station.”

Designed by engineer Faber Maunsell and Hugh Broughton Architects, the new station is being built to cope with the twin threats of precarious location and accumulating ice and snow. The six modules feature hydraulic jackable legs to make raising them up easy. And they have skis on the bottom so the whole station can be towed to a new location if the ice on which it sits threatens to break off and float away.

The new station will also be very luxurious, by Antarctic standards – it has bigger bedrooms than previous ones and a double-height central module that houses social areas to help make the long winter feel less claustrophobic.

Construction can only take place in summer, between the beginning of December and the end of February. It is being built over three summers, so that the station can be ready for that crucial deadline in 2010. The first season’s construction work has just finished and the teams are now heading back to warmer climes.

See how Morrison Falkland, the contractor chosen to work on the project, got on…

Early December. The first challenge is getting the ship in and the materials unloaded. The sea ice extends beyond the shelf but creeks naturally form, so a week before the ship is due to arrive a suitable creek is identified for it to dock. A natural ramp is selected and bulldozed to make it suitable for vehicles.

Vehicles tow the cargo across the ice.

The week before Christmas. Unloading the ship is labour-intensive and takes 10 days, as the site is about 12km inland. Components are loaded on to trailers on skis. Skis are fitted directly onto the larger ones.

This takes until the end of December. Because of a short construction period and the logistics of getting materials across the ice, as much as possible is prefabricated. The weight has to be kept low, too, because the sea ice varies from 1m to 3m in thickness from year to year.

End of December. Materials are stored in lines, a kilometre long, perpendicular to the prevailing wind. If a “blow” starts up – a fierce wind blowing snow and ice – it will scoop out a hollow on one side and deposit a pile of snow on the other, which means the items need digging out.

Early January. The space frame of each module is towed into position. Prefabricated M&E casettes, containing wires and pipes are slid into position. These are 17m long and run the length of the module. It is then jacked up and the hydraulic legs and permanent skis are fitted. Two dedicated modules with generators and fuel tanks are craned into position then the steel frame is fitted at the end of January.

End of January. The two accommodation modules have bedroom and bathroom pods installed.

The solution was to build temporary shelters. Tuplin found a company in Southampton that makes marquees, and gave them less than six weeks notice to make five covers. The tents fitted over the modules “like a glove” and worked really well in the extreme conditions.”

February. Once the cladding is installed it is much warmer inside the module, which means detailed work can continue towrds the end of February, despite temperatures dropping to –20°C. Unfortunately, bad news came before the start of the last season. Problems with the cladding panels meant there was only enough to clad one module. A solution had to be found …

The first job next year will be to move the modules away from the scoops and tails that will have formed over the winter. The cladding will go onto the tent clad modules and internal finishing will continue. A big, central module for community activity (the red module in the CAD image, right) will be built and made weathertight with some being towed to the final site and services installed. In the final year the remaining modules will be moved to the final site and commissioned, while the Halley V site will be so thoroughly decommissioned nobody would ever know it had been there …

The Antarctic is the world’s last great unspoilt wilderness. It’s hard to reach and conditions are severe once you’re there, making it the most extreme place on Earth to build. So what is it like to be part of the 40-strong construction team working on the project?

The construction period lasts 12 weeks, from the beginning of December to the end of February, and everyone has to remain for the entire period. Travel options are: boat from Cape Town in South Africa or plane, which is expensive. Flying is quicker but takes up to three weeks. From the Falkland Islands, you fly on a series of ancient, unpressurised planes. Conditions have to be good at both ends before the plane takes off, which is why there are regular stops. Survival training is compulsory, in case of an emergency landing.

Most workers travel by boat. Once there, workers stay at the current research station, Halley V. Space is at a premium and there is virtually no privacy. “The only time you have privacy is when you draw the curtains around your bunk,” says Tuplin. If there is bad weather, nobody can go outside because visibility is so limited people can get lost just a few metres away. “Everyone is locked in together with very little to do,” he says. “It can get quite claustrophobic.”

Contractor Morrison Falkland had to go through a careful selection process. Medical tests weeded out anyone with a condition that couldn’t be treated in the Antarctic, but most important was ensuring everyone got on. “It’s crucial you create a team where people get along with each other,” says John Hammerton, operations director for Morrison Falkland. “If you have one person who snores and three who don’t in a room, it can be a huge problem,” he says. Rules are strict too; for example, alcohol is limited to two cans a night. Hammerton says this can be difficult to enforce so “it’s easier to pick people who don’t try and get round the rules”.

Better communications have made some aspects of the job easier. BAS now leases part of a satellite, so phoning the site from the UK is relatively straightforward. This means the team can speak to designers and managers back in the UK, but also that relatives and friends can phone up with news. “As communications get easier, people can call with news workers aren’t prepared for,” says Hammerton.

So is it a worthwhile experience? “You either love it, or hate it and never want to come back,” says Tuplin. “You can’t comprehend it until you get here. You’re in the middle of nowhere, with absolute silence apart from the wind blowing and the sun beating down. There’s something magical about it.”

British Antarctic Survey had to find a team that could design a research station capable of withstanding the Antarctic’s severe weather conditions and then build it. Finding a design team proved relatively easy as BAS held an international competition that attracted 86 entries. But BAS wanted teams to work with the contractor that was going to build the station, as the extreme conditions meant the construction process was central to the design. This is where things started getting difficult.

Karl Tuplin, BAS’ project manager for the job, says the company approached contractors all over the world, including the top 100 UK contractors, without success. “It’s a £22m contract, which is tiny, the risks of working in the Antarctic were too great and the market in the UK was very buoyant, so they didn’t want to take the risk,” says Tuplin. In the end, only six contractors were interested. Three were suppliers, rather than contractors, and one was a tiny building company in New Zealand. There was only one realistic contender. “By far the most suitable was Morrison Falkland; they had worked with us before in the Antarctic and they were big enough to do it,” says Tuplin. Morrison worked with each of the three shortlisted designers. The winning team consisted of Faber Maunsell and Hugh Broughton Architects.

The NEC form of contract is being used, and Morrison Falkland is delivering the modules under a design-and-construct agreement. The NEC contract has a target cost, with both client and contractor sharing the pain of exceeding or the gain of beating this figure. The risk is also shared between the two parties.

BAS take responsibility for getting men and materials to site and looking after them, and Morrison Falkland is responsible for the construction. “The contractor does demolition and construction best and BAS does logistics best,” says Tuplin. “It reduces the risks, which keeps the price down.”

BAS also take the risk for the weather (if conditions are worse than predicted, it will lose out) and bear the risk for getting materials across the ice to the site. This year the weather has been good and the ice thick, but the Antarctic is unpredictable so next year could
be another story.