A year in the life of the borrowers: the credit crunch one year on 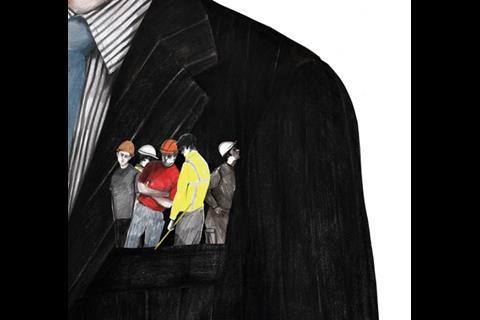 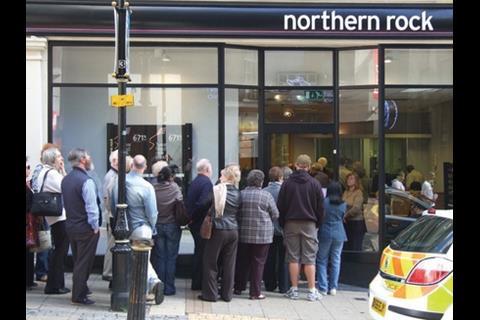 Twelve months on from Northern Rock, Tom Bill looks back at how an unprecedented series of events unfolded, leaving most construction firms residing in the pockets of their clients and bank managers …

‘When you ring a Gordon Ramsay restaurant on Monday and can still get a table for Wednesday you know times are tough.”

This comment from a City analyst last week is a telling insight into the state of the economy as companies retrench on every front, from slashing staff numbers to forgoing Michelin-starred business lunches.

It has been a year since Northern Rock’s bail out by the government announced the arrival of the credit crunch on this side of the Atlantic, and businesses up and down the country have been feeling the pinch ever since. Construction in general, and housebuilding in particular, has suffered more than most. Since the world’s credit machinery seized up last summer, more than 6,000 people at UK housebuilders have lost their jobs.

And there does not seem to be much light at the end of the tunnel just yet. The latest figures from Pricewaterhouse Coopers show that construction insolvencies have risen 35% since Northern Rock customers began queuing around the block to withdraw their savings on 14 September last year.

For the contractors and housebuilders still standing, it is time to adapt. While it is too early to assess the economic fallout of the crunch, a year of financial freefall has seen a power shift in all sectors, and construction is no exception. For now, those holding the purse strings are the ones calling the shots, not those laying the bricks. So how have we got here and what difference, exactly, has a year made?

Greg Fitzgerald, chief executive of contractor and housebuilder Galliford Try, can pinpoint the exact moment that he realised just how bad the housing market had become. “After months of gradual decline, things fell off a cliff in April. When the first week’s sales figures landed on my desk I knew we had a real problem,” he recalls. “It became obvious we had to act severely and stop giving it time.”

Like many of its peers, Galliford had to make cutbacks. And fast. The group made 260 of its 3,900 staff redundant as sales across the industry fell by two-thirds.

Around the same time, Persimmon announced 2,000 redundancies following a 31% fall in reservations, Taylor Wimpey cut 900 jobs, and Bovis cut 400 of its 930 staff after it revealed a 35% fall in home sales in the six months to 30 June.

But behind the headlines, there have been quieter changes, and Fitzgerald is in agreement with Andy Yallop, chief executive of £100m-turnover Croudace Homes, that housebuilders’ new mantra is “cash is king”.

Yallop uses this phrase to highlight the fact that most companies are now focused simply on survival: “You can’t worry about profit during the bad times so we are almost totally run for cash now,” he says. “You have to buy materials and pay subcontractors at different times in the cycle to ensure the flow of cash, which also changes the build sequence.”

Despite Croudace’s healthy balance sheet, Yallop says his senior managers are spending three times as much of their week on cash management than a year ago. As one senior banker says: “You can only keep the body alive if there’s blood flowing through the veins.”

It’s a lesson Tony Pidgley, chief executive of Berkeley Group, believes housebuilders have been slow to learn. “This is the third time the industry has been caught out,” he says. “People wondered for all those years why I scaled the business back to the London market, but I’m only relaxed today because I’ve got no debt and I’m earning nice interest on my £100m in the bank.”

Over the past 12 months, the relationship between banks and housebuilders with debt has moved onto shakier ground than ever. Pointing to the publicly stated debt of £1.7bn at Barratt and Taylor Wimpey, Alastair Stewart, housebuilding analyst at Dresdner Kleinwort, says the ascendancy of cash flow has resulted in this power shift. He adds that the relaxation of lending deals like the one agreed by Barratt’s banks in July will buy time for housebuilders, but they come with a nasty sting in the tail.

“These housebuilders will have humungous borrowing costs. The banks are terrified they will default and if the companies miss one line of credit the banks can pull the plug.”

Barratt and Taylor Wimpey are expected to pay several million pounds more per month in interest as a result of the deals.

Stewart is not the only one who is predicting even tougher times ahead for companies unable to escape the banks’ clutches: “Some housebuilders will no longer be masters of their own destiny,” says another analyst. “If they say they’ll deliver x million in cash flow they’d better damn well deliver it. There won’t be any room for excuses and if it means taking a hit on prices they’ll have to do it.”

And the warnings are coming from both sides as a senior banking source concedes there is little room for flexibility in the new climate. He says: “Yes, bankers are in the driving seat but this is merely a swing in the credit cycle – for the past five years borrowers have been in the driving seat.

Risk was dramatically underpriced and borrowers were able to force through transactions that were unsustainable.”

Another by-product of the crunch is the strengthening of alliances among UK banks. The banking source explains: “International banks are looking for a quick exit, but the UK banks are sharing information to ensure they present a united front to clients. The days of clients playing one bank off against another by shopping around are over.”

Contractors, too, have been losing their grip on the market – to their clients. This has come about because supply has begun to outstrip demand, and those putting the projects out to tender are facing financial pressures of their own.

John Frankiewicz, chief executive of Willmott Dixon, is concerned framework deals may be thrown open to outsiders as clients get twitchy about obtaining the best price. He says: “As more contractors come onto the market and the supply side of the equation increases, it’s going to be a very strong temptation for clients.”

So, is the contracting industry in danger of returning to the days of “screw the builder”? Will the quest for the best price throw partnering out of the window? “Not yet,” he says. “It would be a disaster if we returned to a situation we thought we’d left behind.”

Paul Hodgkinson, chief executive of Simons Group, is also confident that the collaborative approach will hold steady through the downturn, but concedes that margins may be squeezed. “It’s clearly not a profit-enhancing environment but partnering is more about having the right people inside the client organisation than about the wider economy.”

Alarmingly, however, few believe the industry will learn lessons from what have been unprecedented economic circumstances. Yallop says: “We have put new systems in place to control cash but that will inevitably be overtaken by more important things, like where’s the next piece of land coming from.”

And what advice is offered by the man who did get out at the right time? “Don’t get carried away,” is the answer. “If you buy a new car for £2,000 what do you do if someone offers you £5,000 for it? You sell it and buy another one,” says Pidgley. “And what about when someone offers you £10,000 for the next one, and then £15,000 and so on. Why didn’t anyone stop and think about where the market was going? Everyone assumed it would go on forever.”

What are you doing now you weren’t doing a year ago?

Andy Yallop, Croudace Homes
The one thing everyone should take away from this is to look at the downsides of every deal very closely. But I’m afraid that’s not likely to happen in a world where people want everything now, is it?

Tony Pidgley, Berkeley Group
Am I doing anything differently to a year ago? Not really. My life is boring like that. I visit the sites, count the cash and keep people focused on what they’re doing. I just stick to the knitting – always stick to
the knitting

Greg Fitzgerald, Galliford Try
I’m in Lincolnshire today and I’ll visit every single site where we are selling homes. I’m far more hands-on now. Before, I’d split my time 50/50 between construction and housebuilding and now it’s about 75/25 in favour of housing

Paul Hodgkinson, Simons Group
I make all parts of the business talk to each other more than 12 months ago. We need to make sure we don’t miss any opportunity by using our communication network effectively

Original print headline: A year in the life of the borrowers