After the gold rush: Getting paid in Dubai 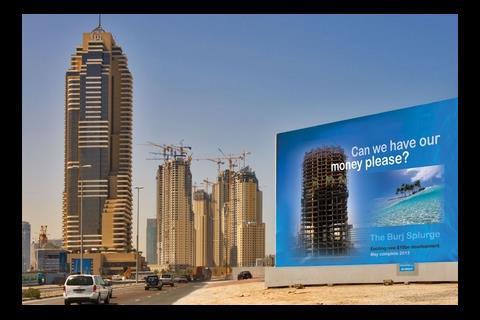 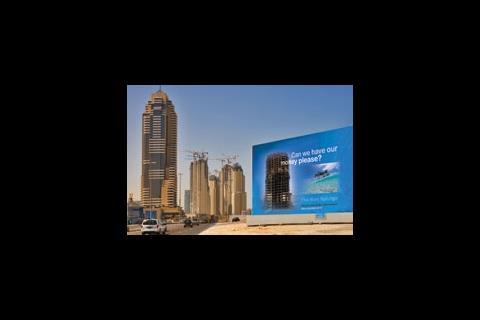 It is claimed that the average contractor is owed £50m, while some consultants’ fees are being slashed in half. Roxane McMeeken finds out just how bad Dubai’s payment problems have become

Dubai is looking more and more like a place with a great future behind it. You can see that most clearly on the billboards erected beside empty sites and motionless tower cranes. “Ordinary is for other people” says the one where the Trump Tower was to have gone. Well, nemesis follows hubris: at least half of the emirate’s construction projects are “on hold” according to research firm Proleads, and nobody knows when, or if, they will start again.

New signs of the desperate state of Dubai’s developers are emerging every day. To look at the top three of them is telling: Union Properties has admitted it would welcome a merger after shelving its flagship £320m Formula One theme park in Dubailand. Emaar recently announced yet more cancelled projects: Asmaran (a 70 million ft2 , £17bn mixed-community scheme billed as “a jewel in the desert”), Maysan (three residential towers, also covering 70 million ft2) and Warsan (500 villas covering 3.4 million ft2). Meanwhile, Nakheel is facing a fraud investigation and has put its £2bn mall expansion plan on hold. It has also been hit by the halving of property prices on its celebrated Palm Jumeira project. Four-bedroom garden homes on a frond are going for £1.2m compared with £2.6m in July.

Where does all this leave the British consultants and contractors who count these developers among their top clients?

The short answer is, cash-strapped. Some are seeing their fees slashed – a Building survey of more than 150 people working in the UAE found that two-thirds of them have been asked to drop their prices recently. Others have been waiting for payments for six months and many are considering legal action.

The first problem was that many developers were reliant on bank credit rather than oil revenue, as is often thought. Abu Dhabi, the capital of the UAE, has about 10% of the world’s oil, but Dubai has almost none. Banks were happy to keep lending to its developers as long as property prices were going up, and could act as collateral for more lending and more construction. But when property prices started tumbling, this virtuous circle turned vicious and clients ran out of money to pay consultants and contractors.

Abu Dhabi’s $10bn (£7bn) loan to Dubai announced in February appeared to offer a glimmer of hope, especially when the Dubai government said this money would mainly go to state-linked developers. But questions are being raised about how far it will go. For one thing, Dubai has declared that it owes at least $80bn (£56bn), of which almost a quarter falls due for repayment this year. The boss of a UK consultant with a large presence in Dubai says: “The $10bn won’t even cover developers’ interest payments.” He adds that compounding this is the fact that Dubai has so few ways to make money. Last year, 65% of its GDP was from real estate. He adds: “And there is no oil, no exports, no tax and 80% of the population are expats, many of whom are leaving.” Now the fee cuts are spreading to Abu Dhabi, where developer Aldar has written to consultants to ask them to cut fees – on live projects by up to 20%.

So how bad has it got for UK firms? Certainly there is no sign that the government cash is filtering through. A senior source at a UK contractor in Dubai is fuming. He says: “The average contractor here is owed about £50m.”

A source at a UK project manager says some payments from Dubai developers are up to six months late; Mace and EC Harris are saying openly that it is taking at least three months to get paid. WSP is estimated to have set aside £4m to cover bad debts and project management consultancy Blair Anderson now employs someone full-time solely to chase payments in Dubai.

Meanwhile, the head of a British specialist working on a major project that stopped in October says his firm was paid 20% of what it was owed in January. He said he has no idea when he will get the rest, although he believes it will come through eventually, as his client is linked to the Dubai government.

Then there are the fee cuts, which are affecting most firms. Evan Anderson, group director of Blair Anderson, says the firm’s fees are between 20% and 30% lower than six months ago. But he is still better off than many architects, whose fees Anderson is renegotiating on behalf of clients. He says: “We are doing a lot of reverse briefing of designers. We’re asking them to cut their fees by up to half and to change the materials they’re specifying to bring down costs by about 30%.”

Contractors across Dubai are having to renegotiate tenders, typically resulting in 15-20% being lopped off their money. The senior contractor says: “Contractors here had been enjoying margins of seven, eight or nine per cent. Now clients are trying to get us to take margins as low as three or even one per cent. They also want to lengthen programmes so that cash flow is less onerous. It’s chaos.”

More pain for consultants is arriving in the form of deferred payment plans. Mark Prior, head of the Middle East for EC Harris, says: “We are discussing deals that would mean we will be paid in six months’ time – or half of what we’re owed in three months and the rest in six.”

Other companies are understood to have been forced to accept payment in the forms of stakes in a development. George Grant, operations director for infrastructure at M&E specialist Drake & Scull, says: “We have no experience of taking equity instead of cash but we would consider it. Our view is we want to work with the clients if it means that work goes ahead.”

We are doing a lot of reverse briefing of designers. We’re asking them to cut their fees by up to half and to change the materials specified

Others are more wary. Anderson has refused payment in shares: “They offer you 1% of a development that you have had no involvement on and no idea how it works. If you invest in something you want to do detailed research on it.”

Meanwhile, the old model of developers paying contractors with money from sales of units in buildings before it has been completed is a thing of the past. Projects launched on this model are being refinanced. Under the new deals institutional investors are brought in and contractors are forced to accept deferred payments.

Anderson says: “The previous model based on off-plan sales is no longer viable, so total financing is being done by investment, and selling is happening when the building is under construction.”

As a result, development is less gung-ho, he adds, which in turn means people are earning lower fees over a longer period. Developments are being built in phases. “Before, a developer would build three high-rises at once; now they are building them one by one. They build a tower, sell it, then use the proceeds to build the next one.”

Such is the state of the market that those who are actually getting paid do not want to admit it. Speaking on condition of anonymity, the head of a British architect’s Dubai office said: “I would rather you didn’t put my name in your article because if other people working for my client find out that I’ve been paid, they’ll be demanding that the client pays them too, and then I’ll have to answer to the client.”

He says at the moment you have the best chance of being paid if you are needed to help with the process of putting a project on hold. “If you are not essential – that is, if you are not putting remedial works in place so the client can put work on hold – you will not get paid.”

Will developers ever pay?

The gravest concern of all is caused by rumours that some developers are about to go bust. Despite their government links, there is no guarantee the state will step in to save these firms. A source at a project manager in Dubai says: “It’s impossible to say whether the government will pay developers’ debts or not. State sponsorship is relatively loose here. Nobody knows whether certain developers are going to be mothballed, merged or go bust.”

Drake & Scull’s Grant, a Middle East veteran, says: “There’s no doubt some clients have run out of money and will disappear. Not the big names though, they need to renegotiate their finance deals but they will carry on.”

He may be right, but the question of when they will pay is still causing UK firms to fret. Emaar, to take one developer, has just had its debt downgraded by Standard & Poor, the ratings agency, from –A to BBB+. It made a loss of 1.6bn dirhams (£304m) in the last quarter of 2008. Meanwhile, the government has warned that the economy may shrink in the second half of 2009.

Most developers are declining to comment on the payment issue, including Nakheel. A spokesperson from developer Limitless did speak to us and insisted that all creditors would be paid. She said: “We’re renegotiating some payment plans, but not all, as part of our overall response to the global situation.”

An Emaar spokesperson also sent the following statement: “Payments for contractors and consultants are based on a credit cycle and set deliverables agreed with them. All payments that meet the criteria have been honoured and will continue to be cleared, in line with our agreements.”

But for those still waiting to be paid and suffering, what recourse is there? Another source says: “Historically, if you’re not getting paid here, you don’t rock the boat; the last thing you do is resort to litigation. But now people are getting highly emotional. If you’re working on a huge project and you recruited a huge team to do it, and you’re owed millions, well maybe it is time to sue.”

He adds that he expects to see “some big disputes in the next three months”, which is perhaps ironic considering that Dubai is aiming to become a regional dispute resolution centre. Prior is among those who admit that “litigation is an option we have our eye on”. It’s a statement that would have been unthinkable in Dubai a year ago.

As the legal cases loom (see box, previous page), it’s clear that relations between clients and project teams are strained to the limit. The head of another UK consultancy, who asked not be named, revealed a conversation he had with a senior emirati working for a big developer. “I said to him, if I don’t get my money, I will sue. He said, you will never work in Dubai again. I said, why would I want to?”