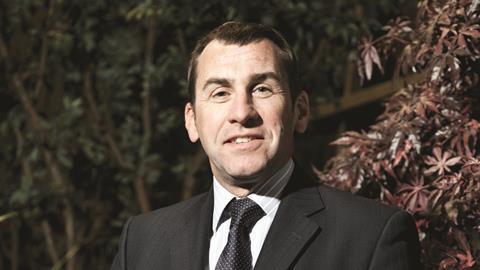 As chief operating officer of the biggest UK-based European contractor with a £15bn order book and profit north of £300m, Balfour Beatty’s Andrew McNaughton has more reason than most to be bullish. But, as he tells Building, there’s work out there for smaller firms too - if they know where to look …

There are some companies out there at the moment that know they’ve got it pretty good. Balfour Beatty is one of them. The £10.5bn-turnover infrastructure giant - it no longer wishes to be viewed as a construction company - is untouchably the biggest contractor in the UK. Carillion, in second place, has less than half the turnover. It is also the ninth largest in Europe (see pages 38-43 for more information). And while 2011 saw pain and contraction for many, Balfour Beatty has instead enjoyed a stream of lucrative project wins, culminating earlier this month in a £750m, five-year contract with National Grid to upgrade the country’s electricity network. Indeed, the company seems to have carried on through the years of economic turmoil pretty much regardless - profit rose 20%, to more than £300m, in 2010, and the order book stood at £15.2bn, an 8% increase on £14.1bn in 2009.

The group is now focusing on expanding further into Australia, New Zealand and South Africa to keep up its impressive growth rate through potentially lucrative contracts - particularly in the mining sector. And it is exploring more opportunities in India after entering into a joint venture with Tata Projects, announced last October.

It’s not surprising then that Andrew McNaughton, the firm’s chief operating officer, is upbeat. “There is still work out there - I know we would say this because we have had a lot of wins recently, but in some sectors and geographies in particular there is work to be won. And I think confidence is returning - we just renewed our banking facility to £850m, which demonstrates this and should be a really positive sign to other firms.”

Easy enough to say from the top, perhaps, but surely things aren’t quite so simple for smaller, less stable companies gearing up for a very tough 2012? “I can absolutely see how it’s relatively easy for us, in our position, to say ‘life isn’t too bad out there’, and I know there are other firms really feeling the strain,” McNaughton concedes.

But the 47-year-old is convinced that if strong firms play their cards right, they can reap the rewards. Here, he explains how Balfour Beatty has weathered the storm (and why market recovery could spell danger), where the firm is heading next, and what the impact of the eurozone crisis is likely to be for the industry, this year and beyond.

‘The market has not been shredded’

Being one of the industry’s “ocean liners”, as McNaughton puts it, has its benefits. You are stronger, more reliable, and safer than many of your competitors - a status more likely to increase than decline in rough waters. But McNaughton says the work isn’t just out there for the biggest firms, but also for those who know where to look. “The market hasn’t been shredded. We have seen something like a 15-20% decline from a peak and there have had to be some changes in direction and activity - particularly in the UK and the US. But there is work out there in civil engineering, building, energy, power water, transport. And we’re also seeing some sectors that have declined over the last two years coming back. Commercial property, for example - we secured several projects in the lead-up to the end of the year worth over £100m. In short, it’s not that the demand isn’t out there. For one thing, there is more need to invest in infrastructure now than ever before, and governments know this.”

He adds that eagerness to invest is also on the up, particularly against the backdrop of such an infrastructure-led programme of works worldwide: “Investors are just very, very nervous. There are companies out there with a serious amount of money to invest - investment funds, institutional investors - all of them want to invest for the long term.

“We have seen it in the last 12 months where we actually divested ourselves of a couple of PFI assets. We did it to test the market, among other things - and there was a huge appetite. This shows that a) there is money available, and b) people value infrastructure assets for their long-term nature.”

So the work is there, if hard to win. And the funding is there, even if it’s locked up in nervous investment vehicles. The trick, says McNaughton, is to be well positioned in the right markets by spotting them as early as possible - something Balfour Beatty has been doing for the last 15 years: “This gives you the headstart you need,” he says. “So we have built up our design and build and PFI experience over the years and now we can apply it elsewhere - like in the US market where there are very few domestic companies with the relevant experience.”

He adds that understanding the definition of “an emerging market” is all part of the route to success: “We talk a lot about emerging markets as the ones to be focusing on and tend to think they must be third world countries. But an emerging market is just a sector that is growing and some will be in established markets. A great example is power in the UK. There has been a huge shift from a lack of development and construction in the sector to now, when a company like SSE [formerly Scottish & Southern Energy] is developing a programme to build eight new gas-powered power stations. Then there is the emergence of work in waste-to-energy, renewable, nuclear. We developed relationships in the nuclear market in 2008, just to be ready for this manoeuvre.”

Considering its strong track record for identifying emerging markets, the locations and sectors that Balfour Beatty has its eye on now could be a good jumping-off point for companies on the hunt for the next big thing.

Sector-wise, there are no great surprises, and many are areas that the firm is already strong in: power, energy, mining, transport and social infrastructure. As for locations, it’s looking at Australia, South Africa, the US and Canada, and South America. India and China are, of course, on the list. But McNaughton says there are other regions with something particularly worth honing in on. In Australia and South Africa, it’s mining. “This is a sector that has potentially huge growth,” he says. “There are some absolutely huge projects planned and firms looking to invest billions of dollars over the next five to seven years.”

In Canada, the pull comes from being able to operate successfully on PPP projects and in the power transmission markets - especially following the acquisition of US professional services group Parsons Brinckerhoff in 2009 for £380m: “Normally we wouldn’t move so strongly into such a mature market, but Canada is growing so fast and it has the resources to support that - so we see it as a good target.”

And in South America, the focus is mainly on Brazil: “It’s very early days here but Brazil has an absolute need and desire to develop all of its infrastructure,” says McNaughton. “It just has an immature structure in terms of the way that it operates and so we’re approaching it quite cautiously - but optimistically. When you look at how that market will emerge and change, it’s very exciting. You do wonder if markets like India and China will resist that change, as they have the internal capacity to do so, if they want to. But if you look at Brazil - it will need support in the form of high-level project management and programme delivery. All of those characteristics point to the fact that it’s a good market to be in.”

Unlike Europe. With the euro hanging in the balance, Balfour’s international work, as with most firms operating in the region, is more often than not away from mainland Europe: “There is no doubt that western Europe is in a very difficult situation at the moment and I guess the main question is, how we will even define mainland Europe by the end of 2012? This region is not a large part of our business as we don’t see it as somewhere we can bring all that much to. The impact of what’s happening in the eurozone on other big European contractors will depend entirely on how the firm is structured and where it operates. Take Bouygues and Vinci, for example - their business models are so diverse it would be tough to see exactly where the impact would hit them.”

And so the industry’s ocean liners steam onwards. But, McNaughton adds, anyone who thinks it will be plain sailing forever is mistaken. Competitors might roll their eyes at his tales of hitting the right sectors in the right geographical locations at the right time, and sustaining high levels of profit and turnover, but he points out: “For us, the danger zone will be when the market recovers. Being such a big firm means we are not as agile as others, and it could take longer to speed up when the storm dies down and the boats start to pick up the wind. That’s why identifying those emerging markets early is so important.”

Proof then that even the sturdiest of industry giants have to navigate tough markets with due care and attention.