Bribery Act: Where the buck stops …

You probably wouldn’t dream of handing over a wad of $100 notes to clinch a deal abroad. But what if a third party acting on your behalf did just that, without you knowing? Under the new Bribery Act you’ll now face 10 years in prison

When it comes to dirty deeds in foreign lands, UK construction has form. In 2008, Balfour Beatty forked out £2.25m to settle allegations of “payment irregularities” on a scheme in Egypt as part of a civil recovery order. The following year, bridge builder Mabey & Johnson was fined £6.6m after pleading guilty to bribing officials in Jamaica and Ghana, and Amec agreed to pay a £5m penalty for “irregular payments” on a project in South Korea. It’s not just British firms that are in the frame: in March this year, three directors of the French engineering company Alstom were arrested in the UK on suspicion of paying bribes to secure contracts overseas.

Now the government is clamping down. The Bribery Act, which comes into force in April, introduces the offence of “corporate failure to prevent bribery”, and its effect is to increase the risk of being prosecuted, as well as the penalties faced by those found guilty.

The risk is increased because even if you or your colleagues would never think of handing over a sports bag full of $100 bills, your organisation could be prosecuted if a third party, such as an agent or joint venture partner, does so on your behalf - even if it’s without your knowledge. Then there is the possibility that activities that firms had classified as marketing might be regarded as bribery by the authorities - corporate hospitality, for example. And how about the “facilitation payments” that are part of the ordinary process of doing business in many jurisdictions and are permitted under US legislation? These are often a matter of a few dollars to lubricate the machinery that dispenses permits and licences, but they may be treated, and punished, as bribes.

Under any of the existing bribery offences a company could be liable for an act of bribery but the authorities have to prove the “directing mind and will” of the company was involved, which has been very difficult to establish. From April, a company is liable if an act of bribery is committed for its benefit and it did not have “adequate procedures” in place to prevent that act of bribery. That company can be held liable even if the person who handed over the bag is not convicted. The unlimited fines that can be imposed on individuals under current law will extend to companies. They also face the possibility of automatic and perpetual debarment from tendering for EU public contracts under separate EU legislation. And individuals will be liable for imprisonment for up to 10 years; under the current law the that is seven.

Christopher Hill, a construction partner at law firm Norton Rose, says: “Companies reacted to the Office of Fair Trading prosecutions by introducing codes of conduct, but that’s not going to be enough for the Bribery Act. Contractors and consultants will need to revisit procedures in a fundamental way, particularly if they operate in the UK and have associated overseas subsidiaries or are using commercial agents and local suppliers.”

Mark Surguy, a lawyer at Pinsent Masons who specialises in fraud, makes the point that construction firms’ exposure to the act may be increased by the economic slowdown. He says: “The recessionary market means companies are increasingly going into new areas such as China and Africa, where corruption is commonplace.” In some cases the commercial opportunity may not be worth the risk, he says: “Companies have said they are so scared by the new regime that they have decided not to go into these dodgy places for fear that they could be dragged through the courts.”

Supporters of the legislation argue it is high time the UK government took bribery in construction more seriously. Despite signing the OECD’s anti-bribery convention in 1997, Britain has only recently been acknowledged as one of the countries that actively enforces the convention. What’s more, construction around the world has been identified as the industry that offers the most bribes, according to the Bribe Payers Survey 2008 produced by Transparency International, a body that researches global corruption and lobbied for the act.

Robert Barrington, head of external affairs at Transparency International, says: “Our organisation sees the damage corruption does around the world. We see people suffering because the hospitals and schools that should have been built aren’t there. The old laws were no longer fit for purpose.”

The new law does provide a defence for companies in the form of “adequate procedures”. The more of these you have in place, the less likely it is that you will be found guilty of bribery. Balfour Beatty is one company that has certainly taken the legislation seriously and acted quickly to put in place adequate procedures. The £2m civil recovery order it paid out over the Alexandria library in Egypt may have played its part here. Chris Vaughan, Balfour’s general counsel and company secretary, says the affair did spur them into action. “It acted as a catalyst, but we haven’t done things we wouldn’t have done anyway. I’d say it helped us raise awareness in the organisation and speed up the process.”

Vaughan says compliance with the act is all about identifying where the risks are. “Who are you dealing with? Where is money changing hands? For example, if it is in a high-risk country and payments are being made through a middleman, then yes, there’s a risk. So you put in place a process to deal with those risks.”

Part of that process is an e-learning package for employees involved in procurement and winning work. There are also financial controls, a hotline for whistleblowers, audit trails, the carrying out of due diligence on joint venture partners, which includes checking their codes of conduct, and independent SFO-approved monitors. “Really, it’s a management and cultural issue. It starts with the chief executive and it’s a message that gets reinforced right the way down,” says Vaughan.

But what about the grey areas in the legislation, such as facilitation payments and “influencing public officials”? Charlie Monteith, head of assurance at the SFO and a member of the Law Commission’s Bribery Act advisory panel, says it is a matter of common sense, scale and degree. “Ultimately prosecuting a small one-off facilitation payment is not going to be in the public interest. But if it is continually repeated, that could trigger prosecution. We expect businesses to have a policy not to pay any facilitation payments and to provide support to staff faced with such demands and to report and escalate via the embassy.

“Similarly, entertaining foreign officials is not a problem. They would be entitled to meals and hospitality. But it has to be proportionate and done in good faith.”

As opposed to the reams of rules and regulations handed down from Europe, the act does not lay down any obligations or standards. And this is what makes business uncomfortable. Companies had hoped the guidance to the legislation would be more prescriptive. Instead it puts the responsibility on directors to make an ethical judgment on their company’s activities. As Pinsent Masons’ Surguy says: “You can carry on as before but the risk of being caught has intensified and if you do get caught, the stick will come down hard. But if you’ve done your best and are unlucky enough to be associated with an isolated bribery, penalties are likely to be avoided or much reduced.”

Monteith confirms this was the intention behind the act: “The whole point is to change the corporate culture … The onus is firmly on companies to police themselves and it’s in companies’ interests to police each other and to self-report, as that will mitigate fines.”

The problem for companies is that it will cost time and money to put in place adequate procedures, which will be a particular strain for SMEs. And in the end they may have to withdraw from profitable regions if the risk is deemed too high. Unfortunately for critics who say this is a step too far, and that business as a whole is being punished for the excesses of a few, there is little they can do: the legislation is coming. But where business can still have an influence is over the government’s draft guidance. The Ministry of Justice is consulting until 8 November, so there is still the possibility that feedback from companies could lead to more clarity on practical ways to comply with what many view as a scary piece of legislation.

What does the new law say?

The act replaces the common law offence of bribery and the offences under the Prevention of Corruption Acts 1889 to 1916. The act will:

The government proposes guidance based around Six Principles for Bribery Prevention which are summarised here by Christopher Hill, a construction partner in law firm Norton Rose:

The 2008 Bribe Payers Index is a ranking of 22 of the world’s most economically influential countries according to the likelihood that their firms will offer bribes when doing business abroad. Scores range from 0 to 10. The higher the score for the country, the better behaved its companies tend to be. 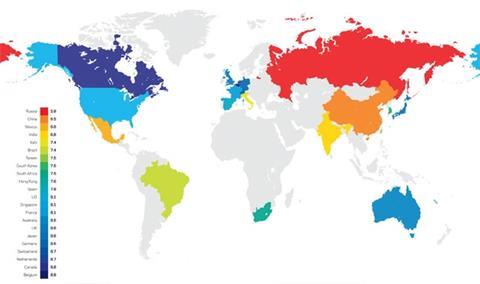 Rupert Choat, Cameron McKenna
Don’t be lulled into a false sense of security by what your competitors are up to. ’It’s market practice’ is no defence. Also, while gifts to foreign public officials are okay if permitted by their laws, under the act the law must be a written one - don’t rely upon a custom or general tolerance towards gifts

Simon Lewis, Dickinson Dees
Ensure your management is committed to implementing anti-bribery procedures and are involved in the development of these procedures.

Mark Surguy, Pinsent Masons
Corporate reputation is very important. The last thing any company needs is a dawn raid by the Serious Fraud Office. If you think any deal may be dodgy, the best decision may be not to go anywhere near it.

Christopher Hill, Norton Rose
All SMEs should review their procedures and record what they have done but should bear in mind that “adequacy” is proportionate to the size of their business and the risk.

http://www.justice.gov.uk/consultations/briberyactconsultation.htm
Ministry of Justice’s draft guidance to the Bribery Act, where you’ll find an online form you can submit as part of the consultation process. The consultation finishes on 8 November.

http://www.transparency.org.uk
Transparency International UK has published a comprehensive guide on the adequate procedures under the UK Bribery Act 2010. The website has anti-corruption tools for companies and case studies in how to design bribery out of the procurement process.