Brush up on your BREEAM 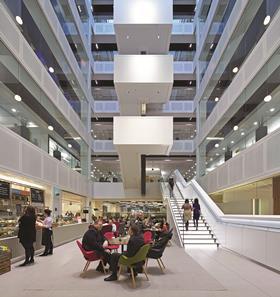 On 10 February, BRE published the final draft of the updated BREEAM standard for assessing the sustainability of new, non-domestic buildings in the UK. The last opportunity to comment on the draft BREEAM UK New Construction 2014 scheme will close on10 March, after 10 months of the most extensive consultation process ever mounted for a BREEAM update. This consultation involved a number of leading industry bodies, including UK-GBC, the UK Contractors Group and the Construction Products Association, and a wide range of individual stakeholders and users including BREEAM assessors and clients from both the private and public sectors.

Regular revisions are an important feature of BREEAM. They keep the standard up-to-date and ahead of regulatory changes, technical advances and best practice improvements.

BRE began work on revising the current 2011 version of BREEAM UK New Construction (NC) in the spring of 2013, in response to proposed changes to UK Building Regulations and SUDs standards. The BREEAM team has taken this opportunity to gather stakeholder feedback on all aspects of the scheme, through a wide-ranging series of meetings, workshops, briefings and public surveys.

BREEAM and the Building Regulations

A major change in the 2014 revision will be the use of national building regulations for Scotland, Wales and Northern Ireland to set the baseline for each of the devolved administrations, rather than using a single baseline throughout the UK.

For BREEAM assessments in England, the relationship between BREEAM UK NC 2014 and the updated Part L 2013 will be the same as that between BREEAM 2011 and the Part L 2010. As Part L 2013 is more demanding than its predecessor, BRE has conducted a series of performance modelling studies to determine the level of improvement achievable over its baseline using current best practice. This has been used to revise the performance required under reduction of emissions (Ene 1).

Similar performance modelling will be used to ascertain the level of improvement achievable over the baseline for each of the devolved administrations, as set by their local building regulations.

A selection of some of the other changes to BREEAM UK NC 2014’s energy and other assessment categories are outlined below.

BREEAM UK NC 2011, the issue concerned with low and zero carbon (LZC) technology (Ene 4), requires a percentage of the energy generated for the building to be from renewable sources. As this is also specifically addressed in Building Regulations, that requirement has been removed from
Ene 4 in the 2014 version and is covered solely through the reduction of emissions issue (Ene 1).

Aligning with the construction process

In response to stakeholder feedback, the BREEAM management category has been restructured to better align with the building procurement process. The resulting new management issue headings are:

In the LCC and service life planning issue there is a credit for reporting on a project’s predicted capital costs. This will help BRE to more fully understand the actual costs of applying BREEAM, and feed this into the update process to ensure BREEAM remains as low cost and cost effective as possible.

Feedback on the transport category raised concerns about distance requirements - particularly their relevance to and impact on rural locations.
Changes to address this have included revising bicycle facility requirements. BREEAM UK NC 2011 requires cycle space availability for 10% of the workforce, but a higher provision of facilities can be impractical in some rural locations. Cycle space requirements now depend on the distance from the nearest urban area. For a rural location:

Feedback on the responsible sourcing of materials (Mat 3) highlights the complexities of this issue. As part of the current review an alternative route to meeting the criteria is being developed, which avoids the need for complex calculations.

Also, new criteria have been added to BREEAM UK NC 2014 to recognise where the constructor develops and implements sustainable procurement policies. The aim is to help smaller suppliers and contractors in particular make a start on procuring materials more sustainably, and then build towards gaining more credits in this issue. Also, a review of how BREEAM recognises responsible sourcing schemes is under way to take account of their growing diversity. This will be completed before the updated BREEAM version is fully launched.

Other changes to the materials category include:

BREEAM category weightings: To maintain a balance between assessment categories, the weighting for energy has been reduced from 19% to 15%. This takes account of changes to the requirements for regulated energy in the Building Regulations. The 4% difference is distributed among a number of other BREEAM sections.