100 Liverpool Street is the radical redevelopment of an iconic 1980s scheme to create over 520,000ft2 of office space, along with retail and public realm, in the heart of the Square Mile. Built by Sir Robert McAlpine, it is British Land’s first net zero carbon development and has a focus on technology, sustainability and wellbeing. The project was driven by reimagining the existing building rather than opting for demolition and new-build. The entire substructure and 50% of the original superstructure were retained and reused. 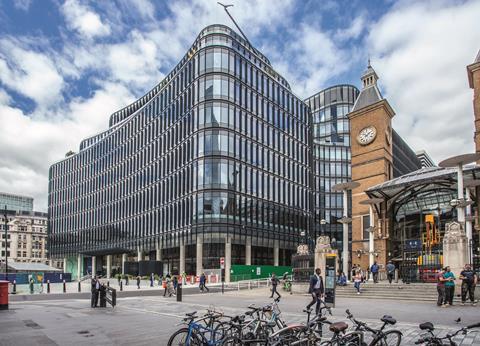 This five-storey extension for University Hospital Southampton NHS Trust includes a large expansion of its general intensive care unit (GICU) on the first floor. The extension is supported on a concrete frame, but where it meets the single-storey MRI facility Bam opted for a lighter steel frame. The design of the steel frame had to be carefully co-ordinated with Siemens, to avoid any MRI image distortion. Other highlights include an atrium for physiotherapy and patient relatives’ cinema nights.

Providing one of Birmingham’s most iconic structures with a new lease of life, Graham completed an impressive transformation of the Grand Hotel. The grade II-listed building’s heritage was retained, including the French Renaissance exterior, while its elaborate internal decoration pays homage to the city’s rich history but with a modern twist. The £45m refurbishment scheme included stripping out the property, renovation works and defect rectification, and new installations, as well as the interior fit-out. The hotel reopened its doors to guests in May.

Hawley Wharf transforms a neglected site in Camden into a new mixed-use precinct. Nine buildings, arranged around three new public spaces, provide a mix of uses including homes (with some affordable), offices, retail and hospitality, as well as a cinema. The Regent’s Canal forms a boundary to the site, which is also shaped by the two viaducts that cross it, leading to the complex geometry of the buildings. The irregular shape of the housing has resulted in a broad range of apartment types, with 100 types across 195 units.

North East Lighthouse Lab at Baltic Park in Gateshead has already been notable for its role in fighting the spread of covid-19. Within just 18 weeks, the project team overseen by Turner & Townsend delivered this purpose-built testing centre, able to process 80,000 samples a day. The scheme was required to undergo many live design changes: halfway through, a new testing module was commissioned that required a total redesign and reconfiguration of the building wall structure and the mechanical and electrical services.

The plan for the Regent’s Crescent scheme was designed to recreate the distinctive curved facade of Park Crescent. The original east elevation was retained and restored, while behind the facade the new structure provides 68 luxury apartments spread over a two-storey basement, a lower ground floor and five storeys above ground. Residents’ amenities include a 9,000ft2 basement featuring a spa, 20m swimming pool, spa pool, sauna and steam room, cinema, automated car stacker, business centre and concierge area.

The Quad at St Edward’s

The completion of the historic quad at St Edward’s independent boarding school in Oxford has been 140 years in the making, since it formed part of the original masterplan set out at the inauguration of the site in 1873. The extension provides teaching and library accommodation in the form of the L-shaped Christie Centre and the oval Olivier Hall, joined by a ground-floor foyer. The new academic centre also includes a cafe, a library and teaching facilities. The top floor is a sixth-form study space.