Falling idol: Is there a downturn in Dubai? 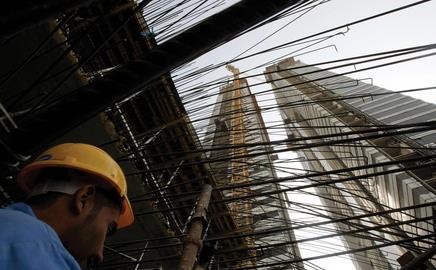 If you thought the golden city of Dubai would be the saviour of the construction industry, think again

Companies struggling with the downturn at home see the land of sun, skyscrapers and seemingly limitless cash as a lifeline. EC Harris, one of the biggest UK consultants in Dubai, has been doubling staff numbers in the region every year for several years, and in August consulting engineer WSP said it would send an extra 250 UK staff to the Middle East.

But in the past few weeks the mood has changed abruptly. Building reported recently that three schemes by developer Dubai Properties had fallen behind. In total, research firm Proleads believes 5,524 projects are on hold in Dubai.

Add to this the fact that developers are laying off staff, Dubai’s property market is cooling down and the price of oil, the resource paying for all the work, is falling, and it is clear these delays are just the tip of the iceberg. So just how much trouble is Dubai in? And what does it mean for the UK firms working there or planning to?

Mark Prior, EC Harris’ regional head for the Middle East, says: “A four-year scheme might now take six years, but Dubai will do more than just slow down – it’s going to get worse.” He says of the firm’s previous 100% a year growth of staff numbers: “We certainly won’t be doing that next year.”

Bart Leclercq, associate director of WSP Middle East, says: “It’s not so much schemes that are already on site – the ones to worry about are those still on the drawing board.”

Graham Cartledge, chairman of global architectural firm Benoy, has 29% of his business based in the Middle East and was part of Gordon Brown’s recent trade delegation to the UAE. He says: “People in Dubai are reflecting on whether the growth they’ve had can be sustained. There’s a realisation it can’t build for building’s sake.”

Projects on hold include Culture Village, Dubai Properties’ £9bn leisure, arts and residential complex, and its Porsche Design Towers, an 85,000m2 office tower and a 30,000m2 residential tower designed by the Office for Metropolitan Architecture and Porsche Design.

The handover of the £430m Atkins-designed Executive Towers has been pushed back from the end of this year to late 2009 and there are doubts over the biggest of the three Palm projects: Palm Deira. Nakheel, its developer, has denied press reports that it had stopped dredging work on the 42.2km2 island project.

Meanwhile, the property market is running out of steam. Agent Colliers International said price growth in Dubai fell from 42% in the first quarter of 2008 to 16% in the second. Leclercq noticed more danger signs at the Cityscape Dubai conference and exhibition in October. There were a lot of impressive stands, but also whispers that “not a lot of actual buying was happening”.

The UAE government is trying to take some of the heat out of Dubai’s property market by forbidding people from selling unfinished schemes. The idea is to stop the wild price inflation caused by the same property being sold repeatedly before it was completed.

Since then, some developers have launched payments plans to attract and hold buyers. Emaar Properties, for example, has created two schemes: one allows customers to pay over five years and the other lets them rent first, with the option to buy at a later date.

Prior says the glut of property on the market needs time to be taken up. “Developers can’t keep fuelling a market where prices are rising 20% a year. We need time to absorb all speculative property.”

People are coming to the realisation that Dubai is not immune to the global crisis. The first hint of this came in September when the UAE central bank created a 50bn dirham (£9bn) emergency fund for local banks. This was prompted by a sudden halt in the flow of foreign money into the UAE, which meant the banks had less cash to lend each other.

Robert McKinnon, head of equity research at UAE investment bank Al Mal Capital, told Building at the time: “Dubai is not an island. Global liquidity is as important to this market as elsewhere.”

Ian Tarry, director of the Middle East at Mace, reckons private clients will be begging the government for funding now: “The government will be drawing up criteria to assess which projects are worthy of funding. Not all of them will pass the test.”

But the government has its own nightmare – the falling price of oil. On the day of writing, it had fallen to $59 a barrel, down 60% on July’s price. A senior architect in Dubai says: “You can bet that the business case for projects on site now were predicated on a minimum oil price of $80 a barrel.”

Is there an upside?

Design and business cases will have to be made sharper, says Tarry. “Now it’s harder to get funding, development will be more thought through. You used to walk into a kitchen and it’d look as if it had been designed by someone who’d never cooked.”

But the fact remains, Dubai’s developers will suffer. There is much talk of redundancy – Damac is cutting 200 jobs and Omniyat, 60. Last week several Dubai banks said they would cease lending to expats at top developers in case these people lost their jobs.

One of the biggest lenders, Emirates NBD, has suspended loans to top-end developers Nakheel, Emaar, Damac, Tamweel and Dubai Properties. Meanwhile Lloyds TSB has stopped all loans for buying apartments, and last week the government ruled that property buyers who cancelled purchases would lose 30% of the sum paid for the property.

Dubai is not an island. Global liquidity is as important to this market as elsewhere

“One or two developers will get into trouble, especially if they have big projects and rely on foreign funding,” says Leclercq.

Both Tarry and Prior predict that some of the state-run developers will merge. Tarry says: “It would be sensible, as they would save money. Some are doing joint ventures already, like Dubai Properties and Tatweer.”

Contractors and consultants are also going to find life in Dubai difficult. Benoy’s Cartledge says contract terms will become tougher; he expects they will contain more demanding stipulations around parent warranties, for example.

It also means firms will have to cut costs, besides the freezing of recruitment. “We’re looking closely at our pipeline of work and reviewing our overhead spend,” says Tarry of Mace, which has 450 assigned to the UAE.

The downturn will be particularly tough for UK firms new to Dubai. “Companies coming here for the first time are going to find it hard to win the trust of clients,” says Prior. “Clients don’t like the idea that for years the market was booming in Dubai, but as soon as the UK market gets difficult suddenly everyone wants to be in here.”

But those trying to break in are not giving up yet. Phil Day, director at UK-based consultant Day & Johnson, which operates in Poland and the UK, says moving into the UAE is “a calculated risk but worth taking if you know how to operate overseas”.

To increase the chance of winning work, Prior advises approaching bigger developers and pitching for infrastructure projects, which are so needed they will go ahead, unlike more speculative projects (see graph).

Another tactic is to spread yourself across the Gulf. Down the road from Dubai, Abu Dhabi is looking stronger. George Grant, chief executive of Dubai developer ASGC Real Estate, says: “Abu Dhabi is not reliant on international funding like Dubai – it is based on cash, not debt – so there is no need for it to slow down development. It may take this opportunity to review the pace at which it has been going and get better organised but it will not be affected by the credit crunch anywhere as near as strongly as Dubai.”

Steve Rayner, divisional director for buildings at Mott MacDonald, agrees: “If a slowdown is coming, it is sensible to diversify. We are looking at other nearby countries, including Qatar, Oman, Bahrain and Saudi Arabia. We’re all going to be taking that country seriously. We might find ourselves opening an office there next year.”

Cartledge neatly sums up the collective verdict: “We remain positive about Dubai but people should not go in blindly thinking that just by being there it will be easy. There was a vague notion that the Middle East was a panacea for all architects and consultants, but it’s a mature market now, reflecting world events.”

Dubai Property’s £9bn Culture Village, which combines residential development with gardens, hotels, a souk and an “Art Island” of galleries

Atkins £430m Executive Towers includes 10 residential towers, one commercial tower and a hotel tower. Completion has been delayed by a year

Residential vs Civils projects in Dubai

Source: Proleads. Projects listed are those recorded by Proleads with a value of more than $10m

For the latest jobs in the UAE and Dubai visit here.

More on Dubai and the Middle East at www.building.co.uk/global