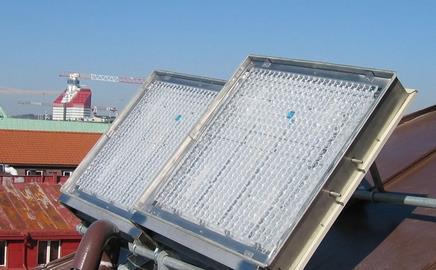 Swedish company Parans is introducing the Parans System to the UK. The system enables natural sunlight to be piped deep into buildings in thin, flexible fibre-optic cables. Unlike traditional sun pipes, which take up space and usually have to be installed during construction or disruptively later, the Parans System’s optical cables can be incorporated easily into existing buildings. Each roof-mounted solar panel is attached to four cables, which can be up to 20m long. Each cable has a diameter of 6mm and comprises bundles of 0.75mm-thick optical fibres. To reach floors further than 20m from the roof, panels can be facade-mounted. Each Parans Solar Panel contains two layers of lenses that focus sunlight into the optical fibres. A photosensor-controlled tracking system automatically orientates the lenses towards the sun and requires less than 2W to operate. Under direct sunlight, the company claims that one panel, channelled to between one and four luminaires, gives about 10,000 lumens of light – roughly equivalent to four desk lamps. The unit weighs 30kg, has plan dimensions of 980 × 980mm and can be installed at a variety of angles.