Flooding in the UK and building for a wetter future

With February’s record rainfall bringing misery to thousands of households, questions are once more being asked about building in flood-prone areas. But now the focus is turning to not where we build but how, writes David Blackman 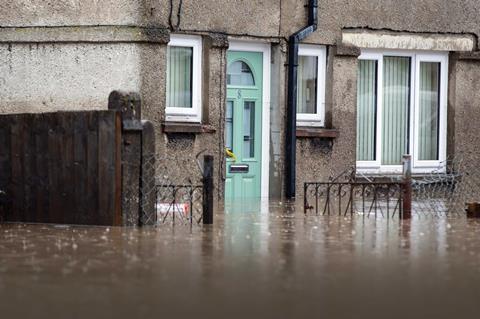 Flood water against the front door of a house in Nantgarw, South Wales, last month, after the Met Office upgraded the storm Dennis rain warning for South Wales to ‘danger to life’ status

The news that last month was the wettest February on record will not be a great surprise to the many communities across the UK that have been battered by floods over the last few weeks. And if the climate science is any guide, the grim reality is that last month’s record inundations are the shape of things to come.

Mary Dhonau has been campaigning on flood resilience issues with a mounting sense of urgency ever since she was washed out of her home in Worcester more than 20 years ago. She now runs her own flood resilience consultancy working to raise local flood awareness. She says: “This is yet another wake-up call about something that will become the new normal of increasingly wet winters and widescale flooding.”

The repair bill for the last month’s disaster will have concentrated minds in Whitehall. In a specially convened House of Commons debate on the floods crisis, held last week, Rhondda MP Chris Bryant said that his South Wales council alone faced a £30m bill to repair infrastructure, which has been damaged over the last month. This bill equates to twice the council’s entire annual capital funding allocation.

Things could have been worse, countered George Eustice, the recently appointed environment secretary, who rejected calls for a public inquiry. He pointed instead to the increased sums being spent on flood defences, which had already saved thousands of homes from flooding.

In 2007’s summer floods, around 55,000 homes were inundated. Thanks to recent investment in flood defences, which was £453m in 2018/19 compared with £360m in 2009/10, he told MPs that “similar” amounts of water had resulted in “far fewer” homes being flooded out. Once inflation is taken into account though, the increase works out at a less impressive £35m, according to an analysis published by Scape last week. 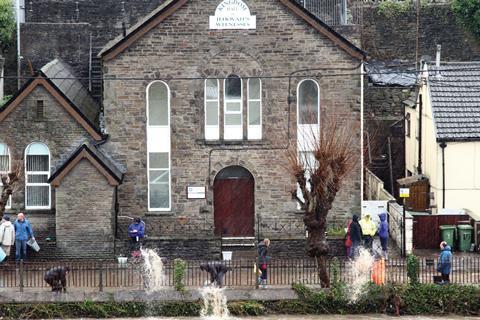 And flood defences alone won’t always be sufficient to protect properties. The increased likelihood and severity of flooding means there will have to be changes to how new housing is constructed, such as raised electric sockets and tiled floors, says Dhonau: “We need to think about flood-adapted homes […] We can’t be repairing the same houses every year, and putting them back exactly the same, to have the kitchen ripped out next year.”

Some developers are rising to the challenge but they tend to be the exception rather than the norm, she says. “They [developers] are still building cheaply, in a non-resilient way – homes that haven’t been adapted.”

Dhonau’s view is backed up by the Committee on Climate Change (CCC), the government’s statutory adviser on global warming, which recently estimated that the total number of properties installed with flood resilience measures is probably still in the low thousands. An estimated annual uptake of such measures in 415 properties each year is, says the CCC, a “long way short of what is needed” to adapt to the climatic conditions that will be created by even a 2ºC increase in global temperatures.

A recently introduced industry-wide code of practice on higher standards for building in flood-prone areas is a step in the right direction, Dhonau says: “They have to make sure that homeowners and businesses are aware of this code, so when people build they are aware that there is a set of standards to be adhered to.”

A report issued earlier this year by Bright Blue, a centre ground Conservative backing think tank, goes further by recommending a reform of building regulations for homes being built in the most flood-prone areas. It said that by a set date, which could be 2025, resilience measures should be mandatory for all new-build properties in zones 2 and 3, where the risk of flooding is classed as greater than 0.1%

This call is backed up by Andy Bord, chief executive of Flood Re, the government-backed scheme set up in 2016 to make it easier for insurers to offer households cover in flood prone areas. He says: “We would welcome any changes to building regulations which would make new and existing homes more resilient to flooding in the future.”

Of course, one solution is simply not to build homes in flood risk areas. The weeks since storm Ciara caused the latest wave of flooding has seen fresh calls for planning curbs on flood plain development. MPs lined up in last week’s House of Commons debate to express their concerns about the issue. John Redwood, the Conservative backbench MP, accused planning inspectors of ignoring recently introduced guidance that flood risk should be taken “very seriously” when weighing up whether to allow appeals on flood plain sites. 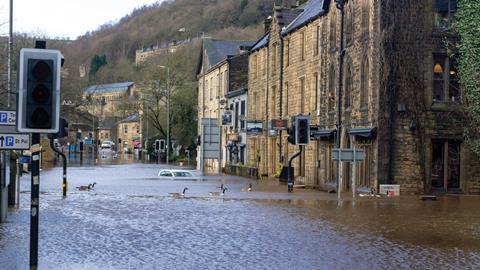 Dr Kieran Mullan, the recently elected new Conservative MP for Crewe and Nantwich, called for planners to listen more closely to local knowledge about flood risks that the Environment Agency may not recognise.

These calls were music to Dhonau’s ears. She says: “The flood plain is where the river goes naturally when it’s full. In an ideal world, there would be no more building in the flood plain: we can’t build to flood.”

But pointing to government rules penalising councils that fail to meet housing targets, she adds: “If councils don’t complete quotas for development, they can be fined and in an area like Worcester it’s very difficult to satisfy that demand and not build on the flood plain.

“The presumption in favour of development means that [Environment Agency] flood objections are often over-ruled. We should not be passing planning permission for somewhere at risk of flooding if the local authority and the Environment Agency has objected.”

The government’s response is that it has beefed up national planning guidance, which tells local councils that “inappropriate development in areas at risk of flooding should be avoided by directing development away from areas at highest risk”. Under a sequential test, planners should “steer new development to areas with the lowest risk of flooding”.

And according to most recent figures published by the Environment Agency, 97% of the applications that it objects to on flood risk ground over the last three years did not receive planning permission. That still means more than 5,000 properties have been built against the agency’s advice, the CCC estimates.

But Bright Blue’s research finds that there has been very little new building in undefended high flood risk postcodes, where at least half of all residential properties have at least a one in-30 chance of flooding annually.

Mike Childs, Friends of the Earth

And as the Environment Agency’s chief executive Sir James Bevan acknowledged in a speech last week, historic patterns of development mean that new housing will have to continue to be built in flood prone areas.

Mike Childs, head of science, policy and research at Friends of the Earth, says: “We need to build more homes, we have a growing population and there are lots of people that don’t have homes who need homes but as much as possible but we should avoid flood plains.”

Given the pressure to develop in flood prone areas, Bright Blue recommends that the National Planning Policy Framework should put more emphasis on flood resilience measures in flood-risk areas. And local authorities should be required to monitor the extent to which resilience measures have been installed in properties at risk of flooding in their areas. It also suggests tweaking the Flood Re to make it easier for households in new build properties to obtain insurance.

Properties built since 2009 are not covered by Flood Re, the government backed scheme that shoulders the flood risk element of insurance policies for properties in areas at risk of flooding. This enables insurers to offer lower premiums in such areas than they would otherwise be able to.

The idea behind the 2009 cut off point for the scheme was to incentivise developers not ot build in areas prone to flooding.

However the Committee on Climate Change’s 2019 annual progress report on how the UK is adapting to climate change found no evidence that the 2009 cut-off point has influenced where developers try to locate new developments. The report says: “The 2009 cut-off, rather than reducing exposure, may have simply left unwary homebuyers, to use an inappropriate expression, ‘high and dry’.”

Colm Holmes, the head of general insurance at the UK’s largest insurer, Aviva, recently called for the Flood Re scheme to be extended to homes built after this date, in conjunction with improved planning and resilience.

Think tank Bright Blue has called on environment secretary George Eustice to consider resetting the cut-off point for Flood Re eligibility as part of the government’s Flood Insurance Review, which was kicked off by his predecessor Theresa Villiers following last autumn’s floods in the Midlands and Yorkshire.

And planning for the warmer and wetter climate of the future should not just be about stopping development. It will also involve making space for water at a strategic planning level, says Jane Hamilton, who used to head the now defunct Milton Keynes Development Corporation. The new town’s original development showed how this could be done with the construction of a network of major lakes forming part of a wider drainage infrastructure. This system is now reaching the limits of its capacity, she says. “With more development upstream, it won’t cope in the future in the way it has done.”

But Hamilton, who is now chair of the Bedford & Milton Keynes Waterway Trust, argues that this offers a model for how large-scale development in areas like the Oxford to Cambridge arc can be reconciled with flood alleviation. “When you deal with site by site applications, these things aren’t taken into account.

“It is quite difficult to get people out of the habit of thinking of water as an obstacle but putting in infrastructure so we know we are not building in problems for the future.”