GIA: Is this the UK’s grooviest building surveyor? 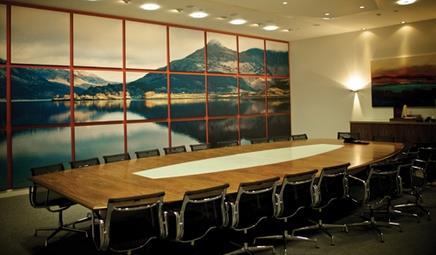 The butcher, the baker, the candlestick maker – if they’re after second careers, they could do worse than apply to become building surveyors at GIA. Alex Smith talks to seven employees who all have wildly different backgrounds. Photography by Steve Schofield

Walking into GIA’s basement office is not unlike entering a fashionable private members’ club. Having established your credentials at the “boutique style” reception, you walk down a grand staircase into a sumptuous interior that could have been lifted from the pages of Vogue.

The many office perks include a kitchen fit for a penthouse, a pool table and games consoles. For those seeking solace at lunchtimes there’s a beautifully appointed library complete with cow-hide chairs.

It’s certainly not a typical building surveyor but then GIA doesn’t employ many of them. Senior partner and founder Gordon Ingram – a mysterious, paternal figure rather like the boss of Charlie’s Angels – says people with building surveyor degrees don’t necessarily make the best surveyors. “We look for people with enthusiasm and an ability to learn before anything else,” he says.

This means that GIA employees include a former male model, an Italian actor, a pub manager, a nuclear research scientist and a video games designer. Hiring people from diverse backgrounds has helped GIA’s to increase staff numbers from 25 to 93 and the business has opened new lighting and interior design departments to become a multidisciplinary consultancy. Ingram says people with the right attitude can quickly learn on the job. “We genuinely prefer to train people ourselves. The best people pick it up very quickly.”

The positive culture is reinforced by imaginative bonding exercises often based around charity work. Awaydays are likely to be spent clearing ponds at National Trust property or visiting the elderly in their homes. And to forge togetherness, GIA stages themed costume nights where wacky garb is worn to raise money.

“The social element is important,” says Ingram. “It’s easy in business to lose connection with humanity. Ultimately it gives you prosperity and happiness, which leads to better communication and productivity.”

Ingram says workloads are similar to a year ago despite the credit crunch and GIA is busy expanding its interior design and building consultancy departments. So if you’re fed up with your career as a lifeguard or Formula 1 driver, give Gordon a ring and you could be enjoying life in construction at Britain’s grooviest building surveyor.

Previous life: I was an air steward – basically a tea lady on a plane – an IT teacher, and a computer games programmer. My job for a year was to put bones in characters to make sure they moved correctly. The games I worked on included Lego Star Wars and Who Wants To Be a Millionnaire.

Why building surveying at GIA? I was made redundant but didn’t apply for games jobs as there are too many talented 18 years olds out there happy to work for pennies. A recruitment agency told me about this job. They said it involved light analysis. I didn’t think I had that skill, but they were impressed by my portfolio.

Favourite office perk: The Xbox, and female company. Women tone down the testosterone. The games industry doesn’t have any – it tends to attract a certain type …

Previous life: I studied art and design at St Martin’s. I had the leading role in cult Italian high school film Come te Nessuno Mai. Then I got bit parts as a murderer and a violinist on Italian TV. I presented a Sky TV arts show in Italy then did a masters in architecture and sustainability and headed the sustainability department at Parritt Leng.

Why building surveying at GIA? I wanted to do something more hands-on with more analysis. I can do interesting projects with major architects such as Building Design Partnership, Make, Rogers and Foster. You’re informing the design. They might not have had the insight into light you can offer them. It’s rewarding and interesting, and always changing.

Favourite office perk: The kitchen. I cook every day – mainly pasta dishes for my team.

Previous life: I was a male model for 10 years, working for Top Man, Burton and French Connection. I was also presenter of Sky 2’s Vegas Live, including its Poker show. And I was a part-time estate agent, which I loved.

How’s it going? I’m being encouraged to progress and possibly be a partner. That can happen quite quickly if you put the effort in because you are recognised. I don’t feel used here – that’s what I like.

Favourite office perk: The staff. It’s all about looks for me, and it’s about looks here. It’s a good-looking firm generally. Even Gordon’s quite good looking.

Michael Harper, associate partner and head of department, rights of light and daylight and sunlight

Previous life: After a double maths degree, I was a nuclear research scientist at British Nuclear Fuels. I then worked as a consultant advising science entrepreneurs, did an MBA and worked on the GlaxoSmithKline management development programme until the grant money ran out.

Why building surveying at GIA? I was made redundant at GlaxoSmithKline and Gordon offered me a role here.

Transferable skills: Geometric understanding of light; the ability to put technical information in layman’s terms and knowledge about growing businesses.

Favourite office perk: I really like the goldfish tank.

Previous life: I worked at Royal Bank of Scotland as a debt management consultant helping people in financial difficulty. I needed a law degree to progress so spent five years studying at the Open University.

Why building surveying at GIA? I graduated in law assuming I would join a legal practice to become an insolvency lawyer but firms wanted me to start from the bottom. A recruitment agency suggested the GIA job, which had property-based law and land law. GIA offered me the opportunity to learn on the job. To qualify as a solicitor I would have had to do another two years which would have cost me £10,000, then two years of training on £17,000 to become a junior solicitor.

Transferable skill: In debt management I enjoyed solving intricate problems. It’s the same here – I look at different people’s problems and see how they can progress.

Favourite office perk: The hair straighteners in the loo.

Previous life: I worked as a marketing manager at Berkeley Homes and Linden Homes. Then I found a job creating show homes for developers but left because it became a glorified sales role.

Why building surveying at GIA? It wasn’t something I planned.

How’s it going? A client asked if we could do interiors as well as lighting design and we decided to set up a department. As I’ve always had a passion for interior design. GIA allowed me to spend two days a week on a course and now I work full time on interior design.

Transferable skill: The rights of light department required a range of skills including the ability to communicate, which I was good at.

Favourite office perk: The cowhide chairs I introduced in the library.

Previous life: I left college and worked as a chef to fund my way through university. After four pubs, six restaurants and a nightclub I ended up working as an estate agent, which I hated.

Why building surveying at GIA? I always wanted to work in London. I applied for anything property-related. When I saw this job, it was like, wow! Something made me sit up. They were going to give you responsibility straightaway. From day one I was involved in the Shard and the Pinnacle, and it’s fantastic.

How’s it going? My role has already changed in the year since I started. I’m looking after the everyday issues of smaller projects while being overseen. I have never had that level of trust before.