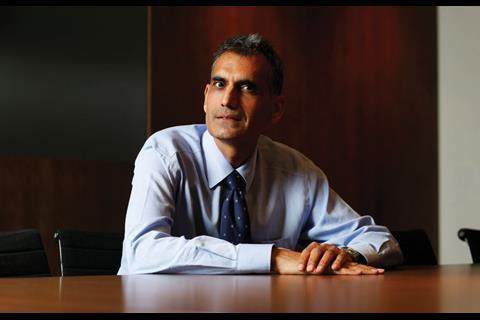 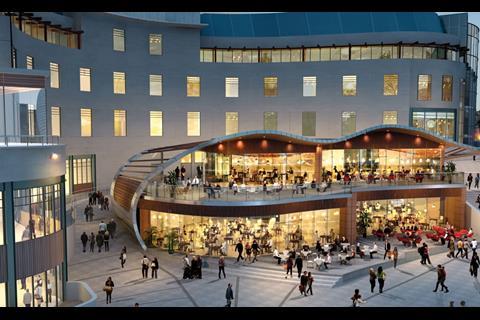 Hammerson has plans for a 20,000ft2 restaurant-focused extension of Birmingham’s Bull Ring shopping centre. Architect Chapman Taylor has been hired to design the scheme

Time was when some contractors found Hammerson such an exacting client, they steered clear. Now Vinod Thakrar, the man in charge of its supply chain, has them lining up to talk to him. Luckily for them, he’s after fresh blood

Vinod Thakrar has a wide smile, bright eyes, an infectious laugh and a terrifying habit of switching the whole lot off in a heartbeat. Hammerson’s director of project management is as jolly and gregarious as they come, but as anyone who’s worked for him will tell you, this doesn’t stop him striking terror into you if it means getting the best results. “We don’t take any prisoners,” he says when asked about the firm’s reputation as a client. “And I expect an awful lot from the supply chain. I am a strong believer in tough but fair. I have a lot of youngsters coming up to me after projects saying ’God - so many times during that project I went home and I told my wife or girlfriend, I had a right old bollocking from Vinod today. But I thought about it and learned from it’.”

Thakrar, 52, says he is “firm, not ruthless”, but admits there are others who may disagree. “My idea of firm isn’t to be nasty. I treat people how I would want to be treated,” he says earnestly. “But then I guess there may be people out there who think I am a total bastard.” he laughs, the smile firmly back on his face.

It’s hard to keep up.

Thakrar’s demanding nature comes from having spent almost 30 years in the industry after moving to the UK from east Africa in 1972 - he started off working on site as a civil engineer for Taylor Woodrow in the early eighties and has spent the past 17 years rising through the ranks at Hammerson overseeing work on projects including West Quay Shopping Centre in Southampton, Cobalt Circus in Bristol and the Bull Ring in Birmingham. Now he is overseeing the client’s retail and commercial portfolio on the project management side. No surprise then that firms with an eye on the client’s multimillion pound pipeline of development are banging at his door. Thakrar warns it may take him a while to get around to everyone: “People say I don’t get back to them. But I will - they will get their chance. But there are only so many people I can meet in 52 weeks each year.”

So what’s the best way to impress him and how does he go about discovering potential new supply chain members? Thakrar says he is aware of the industry’s perception that Hammerson sticks to the suppliers it knows. But he says that although they do get a lot of repeat business from firms they are familiar with, there is no formal agreement with anyone and that people would “be surprised” to learn how much time he spends on the lookout for fresh blood. “We’re actually very flexible. I am always meeting new people and I try to see everyone who approaches me, though this isn’t the only way I find out about them. I read Building every week to look at who is doing what, winning which project, providing what service and keep an eye on them. I also talk to people on other jobs, other clients to see who they give good feedback on. It’s amazing how much someone’s name will come up if they’re good, you know. And I go on an awful lot of site visits. I look at the work myself and if I like something I will find out who did it.”

He does admit that, because of the large projects Hammerson tends to take on, there are few direct opportunities for small firms, although he says it is always possible for them to win work through the main contractor.

“You have to be the best”

With such a dearth of work available at the moment, Thakrar, like most private sector clients, can afford to be more choosy when it comes to selecting a supply chain. As you would expect, he demands the best and says that firms wanting to work for him will have to accept the way Hammerson operates, something that plenty of companies weren’t too keen on back during the boom times.

“A few years ago, we would be struggling to find a dozen contractors to take on one of our schemes - they’re certainly easier to find now. The thing is we do believe that the contractor is the best person to take the risk. Why should we take it on? Some people don’t like that and think the risk should be shared. I just turn around and say ’look, you’re the man managing the works and we’ll pay you for that. Either you have the skills to manage the risk or you don’t’.”

Thakrar also points to innovation and good ideas as two more of the qualities he looks for in his supply chain. He has no qualms admitting that, as a client, it is not Hammerson’s job to be “clever”, nor would he expect it to be: “We want guys who can think and come up with good ideas. Because we’re not clever - they are. They’re the guys with the knowledge and we rely on them to tell us what we need to know. Then it’s up to us to take a view and utilise innovations - but we want someone to come up with them first. Anyone who thinks the clients are the ones who come up with the good ideas … that’s a load of bollocks.”

Apart from a willingness to take on risk and the ability to come up with 10 great ideas before breakfast, what else impresses Thakrar? Well, in no particular order, they are: 110% effort, complete and total honesty, a cultural fit, like-minded thinking and a phobia of shortcuts - “they always hurt you”. And he probably expects a degree of comradery and some socialising too. “I like to take an interest - down the supply chain to the subcontractors, too. That means a lot of site visits. And a lot of eating, drinking and socialising.” The smile is back.

But Thakrar rounds up his supply chain wish list with a harsh dose of reality. “I just wish I had enough work available to give these guys,” he says. And that’s the problem. Hammerson, like many private developers, has had a pipeline on hold for months and months. Things are starting to creak back into action - Thakrar points to retail projects including Eastgate Quarters in Leeds worth £300m, Sevenstone in Sheffield, worth about £150m, and commercial schemes in the pipeline such as London Wall Place with an estimated value of £170m and Bishops Place in London - another big job with a value put at about £300m. But there is no clear idea on when these schemes will get off the ground properly, and Thakrar warns that there are tough times ahead - particularly in retail.

“A few years ago I would be sat here showing you plans and presentations about all the schemes in the pipeline and what we’re working on and what’s about to kick off. But these are different times we live in now. Retail in particular is really tough.

We’re struggling. Is it because people are tightening their belts? Or internet shopping? I don’t know, but the fact that we are struggling to get our retail projects off the ground suggests that times ahead will be tough. We have an equity stake in nine shopping centres though so we’re working out how we can make more money from existing assets, how we can sweat them. Those will be the short-term fixes as a survival strategy.”

Where might things go? What can the industry expect in the future? Thakrar bursts out laughing. “You know what?” he gasps. “I went to an event about three years ago and predicted the future of the industry and I got it so wrong. I was so bloody bullish and it was miles off. I am no economist. I wouldn’t want to try to make another terrible prediction.”

No crystal ball gazing, then, but Thakrar has some words of reassurance for the industry: “We are looking at things and we have our eye on an awful lot of office projects. The main thing to say is that it. will. come. back.”