Hempcrete: a natural solution in the quest for better materials

Construction’s journey towards a zero-carbon future has largely focused on modern materials and technologies. But the insulation and low carbon credentials of bio-based materials such as hempcrete are winning over some serious players. Thomas Lane reports 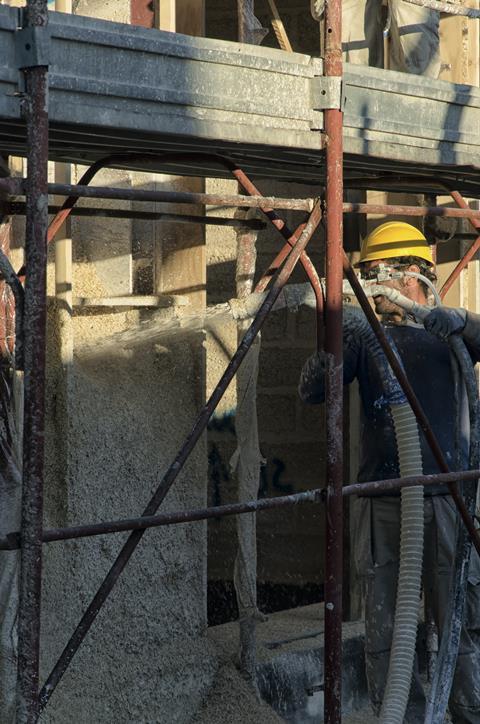 Hempcrete is very versatile – it can be sprayed into position, laid between shuttering, made into blocks or prefabricated panels

Back in 2001, Building went to visit an architect in a small Suffolk village who had persuaded 15 locals to use a mixture of lime and hemp for their building projects. The architect showed Building around his lime and hemp extension, waxing lyrically about the material’s low environmental impact, excellent insulation properties and breathability.

The architect’s name was Ralph Carpenter, the village was called Hartest and, according to Tom Woolley, professor of architecture at Queens University Belfast, and an expert on natural building materials, Carpenter is the “grandfather” of lime hemp construction.

Carpenter first saw the material, called hempcrete, in France in 1994 and initially found it ideal for repairing the local wattle and daub buildings. He then used it to build his extension and other local projects including two hempcrete homes for Suffolk Housing Society.

Part of an 18-home scheme, the performance of the homes, which were compared to conventionally built masonry ones, was monitored by BRE. This concluded that the hempcrete-built homes were structurally equal to the conventional ones, were one to two degrees warmer for the same heat input despite being supposedly poorer performing on paper, gave complete protection against water and were less prone to damp and condensation.

The hempcrete homes did not perform as well acoustically and were more expensive to build, costing £526 per square metre of floor space compared with £478 for the masonry homes. But the hemp houses met sound regulations and the cost uplift was to be expected given hempcrete was a new and unknown form of construction at the time.

In 2006 the Suffolk brewer Adnams took the brave decision to build the UK’s first commercial hempcrete project, a 4,500m² distribution warehouse near Southwold as this matched the company’s sustainability values and promised to be cheap to run. With a wall U value of 0.18W/m²K, beer placed into the warehouse stayed cool without the need for any refrigeration equipment. Adnams subsequently reported that the building was using 40% less electricity and 10% less gas per m² compared with its old distribution centre.

Six years later retailer M&S went nearly 10 times bigger with a 42,000m² hempcrete superstore in Cheshire Oaks as part of its Plan A sustainability strategy. After a year’s monitoring M&S reported that the store was producing 40% fewer carbon emissions than an equivalent, conventionally built store. The retailer said the hempcrete walls helped the store lose less than 1°C overnight compared with 9°C in other store environments.

Given these impressive credentials, could hempcrete become a valuable tool in the construction industry’s quest for a zero-carbon future?

The embodied carbon credentials of hempcrete are good. It consists of approximately 30% lime to bind the material together and 70% hemp shiv which provides the insulation. Lime production has a carbon cost as this involves heating limestone to of 900°C – 1,000°C, albeit lower than the 1,450°C needed for cement production. Hemp absorbs carbon as it grows; if this sequestered carbon is included in hempcrete’s embodied carbon calculation, it makes the product carbon negative.

According to the Hemp Block Company, its hempcrete blocks have a carbon footprint of -11kg/m³. The case for including sequestered carbon is more compelling than that for timber as hemp can be grown and harvested in just four to five months. And hemp shiv is a waste product from textile production.

If someone comes to us and says they want to build a really energy-efficient eco house which is going to last 100 years, then we would say use hempcrete

Another advantage of hempcrete is its versatility. Woolley, who is also an architect working with Rachel Bevan Architects, has used and written extensively on natural building materials – his upcoming book Natural Building Techniques has chapters dedicated to materials including straw, timber, earth and hempcrete and he says the latter is the best.

“If someone comes to us and says they want to build a really energy-efficient eco house which is going to last 100 years, then we would say use hempcrete because it does far more than all those other materials, it provides you with insulation and thermal mass, it is breathable, fireproof and healthy so it ticks all the boxes. And it is cheap which is another big advantage.”

Hempcrete is a walling and insulation material rolled into one and is used in conjunction with a structural frame. This is generally timber for smaller projects and steel for larger ones such as distribution centres. In a timber-framed house it eliminates the need for external cladding, breather membranes, sheathing boards, insulation and plasterboard.

“It is essentially much simpler and easier to do,” says Woolley. Hempcrete is usually finished with a lime render externally, and a lime plaster internally. 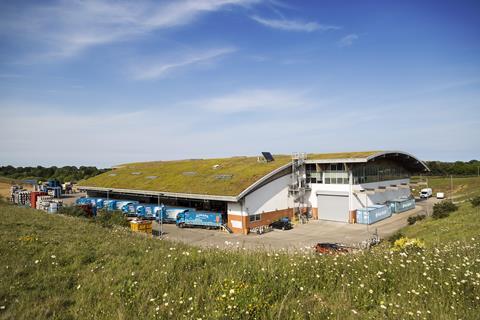 Hempcrete has been used for large projects including a 4,500m² distribution centre in Suffolk for the brewer Adnams

The material can be placed between shuttering manually or sprayed in. Alternatively, blocks are available in a range of different sizes; these have the advantage of being familiar to those with block laying experience. Blocks also eliminate the drying times of insitu hempcrete construction and make hempcrete construction easier in winter when temperatures are low. Hempcrete can be placed between timber studs or externally in situations where clients want to express the structural frame. The Hemp Block company says its 350mm thick blocks have a U value of 0.2 W/m²K, 450mm thick blocks have a U value 0.11 W/m²K which makes these suitable for Passivhaus projects. Hempcrete is also used for insulating solid walls internally and externally and it can be used for floor screeds too.

Given its versatility and meteoric early rise, how is hempcrete viewed today? It has been used for non-domestic projects including the walls of Bradford University’s Bright Building, achieving the highest BREEAM rating ever for a university building in 2015. According to Woolley, hempcrete food and beverage storage facilities have been built since the Adnams project including one for the Wine Society in 2009. This featured prefabricated hempcrete wall panels but was clad in conventional aluminum cladding so, unlike the Adnams facility which was rendered, looks like a standard warehouse.

According to Woolley there are others, but he says clients are cagey about the material and don’t want people to know that they have a hempcrete building. “There are people who are using hempcrete buildings because it is good for the bottom line – they don’t need any heating or cooling in the building and the materials are cheap,” he says. He isn’t sure why people are coy and suggests it could be an insurance issue or nervousness about hemp because of its association with illegal drugs. 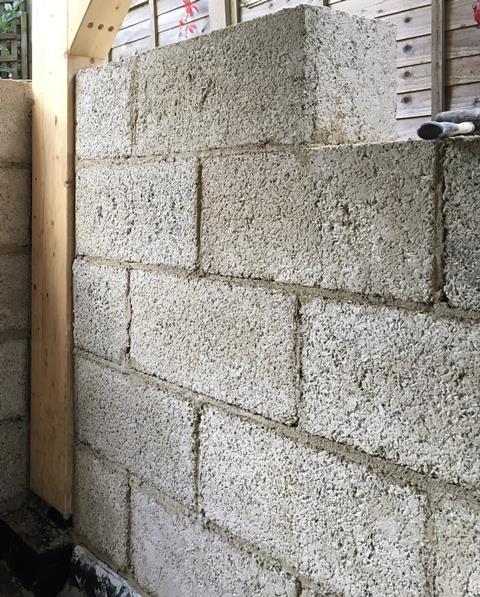 There are several established companies offering hempcrete products including the materials and contracting services. This includes blocks, spraying services and the sale of hemp and lime products. These are not exclusively the preserve of SMEs: Lhoist is a €2.2bn turnover company with 6,400 employees and markets hempcrete under its Tradical brand. It declined to speak to Building for this article.

Woolley says there is a lot of international interest and he is part of a group developing building codes for hemp construction in the USA. Hempcrete has Local Building Standards Scotland (LBSS) certification north of the border and according to Woolley, LABC, the professional body for local authority building control which also certifies products, has said it would certify hempcrete providing someone is prepared to stump up the £3,000 registration fee. Part of the reason no one has done so is because building control is largely supportive of the material which means certification is not essential.

Hempcrete is mostly used for small projects such as private housing. Breaking into the mainstream is a bigger challenge though. According to Woolley, who has been talking to Carmarthenshire council in Wales about using hempcrete for building 600 rural homes, the odds are stacked against hempcrete because the Welsh government is backing the Active Building Centre in Swansea which has received £36m of government funding to test and prove materials and technologies to deliver zero carbon housing. 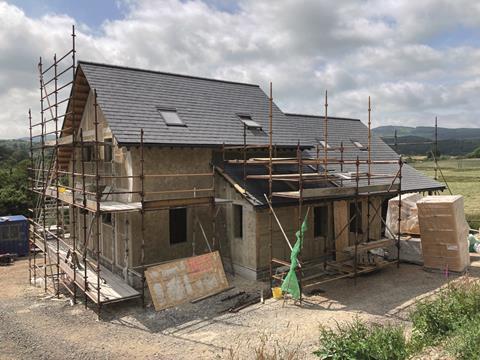 Hempcrete is mostly used for small projects, such as this house under construction in Galloway

The focus is on modern materials and technologies such as PV and heat pumps rather than bio-based materials. Woolley adds that he is working with the Active Building Centre and the Welsh government to try to persuade them to use alternatives such as hempcrete.

Interest in hempcrete could be driven by reasons other than zero carbon. “Initially we wanted to project ourselves as a carbon capture company. What struck me after conversations with quite a lot of people is a drive for healthier living environments,” says Neil Stephen, the sales director of the Hemp Block Company. “It’s becoming a big factor as the air in our homes is probably the dirtiest we breathe because of all the petroleum-based products used in construction.”

Stephen says enquiries about the company’s products have increased by 50% in the past six months, with these coming mostly from architects interested in hempcrete. He adds that the company is targeting small housebuilders which build five to 10 units at a time. “I was talking to one yesterday who has just done 10 units and they have some other local sites and are going to replicate those houses but instead of doing cavity walls, they are thinking of using hempcrete because they can use it as a marketing opportunity as healthier homes,” Stephen says.

The company is also talking about supplying hempcrete to a small office developer and another one interested in using the material for a three-storey, 120-unit later living development. Hempcrete may not have hit mainstream construction quite yet, but it has come a long way since Ralph Carpenter built his extension 20 years ago.