When Hurricane Irma struck the British Virgin Islands last September, the government’s disaster relief effort sprung into action. Gary Sullivan, chair of construction logistics contractor Wilson James and a colonel in the engineer and logistics corps, explains how UK construction helped the islanders get back on their feet 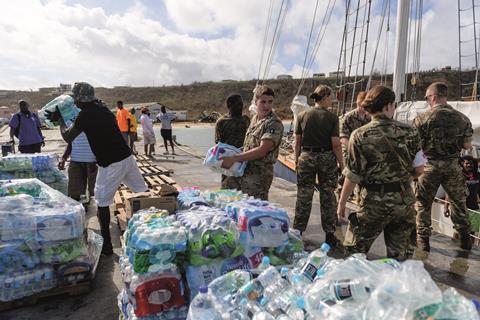 The construction industry receives more than its fair share of negative press and it has been known to be a little introspective. It is also not great at patting itself on the back when it does something good. However, when it is good it is very good. You may not have heard of Operation Ruman – it is the military support to the UK government’s response to the devastation caused by Hurricane Irma in the British Virgin Islands (BVIs). The devastation was unprecedented. On 6 September 2017 winds ripped through the Caribbean islands at more than 200mph destroying infrastructure, smashing buildings and bringing power, sewage and desalination plants to a standstill. Ten days after Irma, the islanders braced themselves again as Hurricane Maria swept in; although not as powerful as Irma, it delayed the aid effort by a few more days.

Throughout September and October, you would have seen on the nightly TV news soldiers from the Royal Logistic Corps, Royal Engineers and various infantry units clearing beaches, delivering essential supplies and providing temporary shelter to those people who lost everything. What you wouldn’t have seen is a group of army reserve volunteers who, as a standalone unit, have supported the British Army for more than 150 years. Formed in 1865 to advise the military on matters of civil engineering and transport, the Engineer and Logistic Staff Corps (ELSC) were asked to step forward and help. Today’s ELSC, part of the army’s 77th brigade, is made up of senior people from many industries – chief executives and executive directors with expertise in communications, regeneration and many other corporate functions. It also has a significant contingent from the UK’s top construction and infrastructure organisations.

The usual competitive barriers of the construction industry were dropped, and collaboration became the name of the game 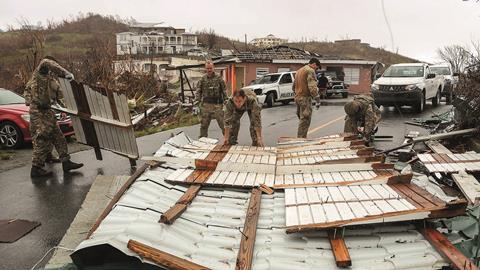 While the army has the skilled and talented Royal Engineers, they cannot be experts in all disciplines in the complex world of infrastructure. This is where the officers of the ELSC can offer support. Its first task in the BVIs was to help get the communications up and running, with engineers from BT and Vodaphone being dispatched on request from ELSC officers from its cyber and comms group. The next job was to deploy one of its number to act as the onsite liaison officer: Lieutenant Colonel Tim Brent, of Jacobs Engineering, was flown out on the first available RAF flight, while back here in the UK his ELSC colleagues were working on what support would be required. While Brent was in the air, advice and guidance was drawn from Aecom, Centrica, Wilson James and Brent’s colleagues at Jacobs. Co-ordinating activity here in the UK was Colonel Guy Hammersley – until recently he was executive director at the Building Research Establishment.

The UK has a long-standing development partnership with the Caribbean. It already has programming in place to support the construction of disaster-resilient infrastructure. This includes £300m from the UK Caribbean Infrastructure Fund to build more than 12 climate resilient infrastructure projects, including roads and ports, and a £38m Pan American Health Organization programme to help at least 50 health clinics to better withstand natural disasters.

Once the army was on the ground on the BVIs, the scale of the devastation became apparent. The man in charge of the defence contribution, Brigadier John Ridge, a Royal Engineer, set about the rescue part of the mission using the helicopters and landing craft of RFA Mounts Bay and HMS Ocean to recover people and deliver aid. The airports across the islands were all damaged and unusable, so Royal Engineers set about reinstating them for use by military aircraft (RAF) so that equipment and stores could be delivered more quickly. Specialist teams were also dispatched to help get the power back on, first using generators and then working with the

BVI government to replace poles, pylons and other infrastructure damaged by Irma.

The Royal Logistic Corps with their landing craft and mexeflotes (a scalable raft system for ship to shore operations) were using the tourist beaches to land food and water and the infantry was supporting the clear-up of debris. Once life support systems were operational, specialists from the Foreign and Commonwealth Office and Department for International Development (DfID) were also able to deploy to support the operation, bringing skills around health and housing to the effort.

As requests for information were transmitted back to the UK, the usual competitive barriers of the construction industry were dropped, and collaboration became the name of the game. As the scale of the humanitarian disaster unfolded – with 90% of buildings damaged and 50% beyond repair – it was clear to Brent that there were few resources and even fewer skills on the islands. With the local population finding employment in tourism and financial services and the BVI government having a capital spend on infrastructure of only $25m a year, it became apparent that while the army could provide manpower and engineering knowledge, more specialist programme management support would need to come from the private sector. Brent was tasked with setting up a project board and creating its terms of reference to support the UK Task Force’s decision making and to look over the horizon. This was chaired by Chris Austin of DfID, who was the lead for UK government. 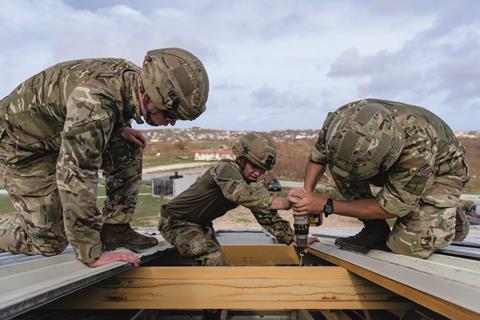 The military effort in numbers

The three branches of defence have worked on joint operations throughout history; they have also blended the use of reserves well over the years, and have called on the Engineer and Logistic Staff Corps in all conflicts, advising on railways, Mulberry Harbours and power stations from the Boer War to operations in Afghanistan and now humanitarian assistance all over the world. In the aftermath of Hurricane Irma, the military effort involved:

Royal Fleet Auxiliary Ship Mounts Bay is operated by civilians in support of the Royal Navy and has personnel from the Royal Marines, Royal Engineers and Royal Logistic Corps on board. 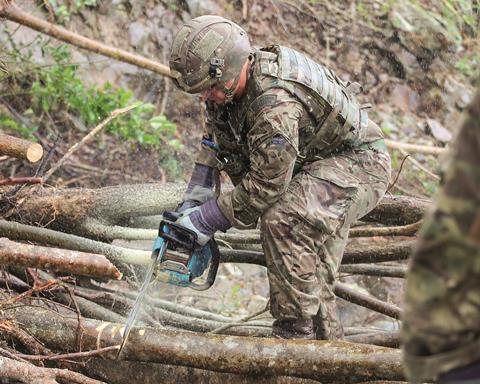 The rescue element was accomplished very quickly – in a matter of days – and effectively by the UK’s military support to DfID. This was followed swiftly by the recovery phase, which took several weeks and took what the military would call a “whole force approach”, using assets from defence, DfID, NGOs and the private sector.

Life is slowly regaining some kind of normality for the people of the British Virgin Islands. There is electricity and water available to most if not all and slowly the tourists are returning as the hotels begin operating and the supermarkets are once again stocked with food. The UK government has created a private sector task force to advise on what is now being called “Build Back Better”.

The plan stresses immediate priority to restoring basic infrastructure to encourage the return of business activity and attracting new investment, particularly in tourism, financial services and SMEs. Priorities include: 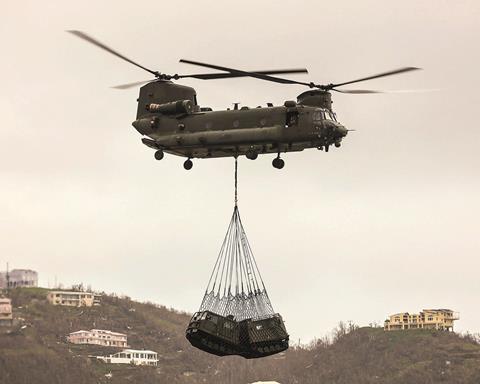 Estimates on the cost of Building Back Better vary, but it will exceed $1bn (£716m). Again, experts in architecture, construction and logistics are all volunteering to support this initiative. While most of the military have returned to the UK, there remain a few specialists Royal Engineers supporting the BVI government and of course the ELSC remains on tap if expert advice is required.

The UK government has pledged to continue to support the reconstruction of the islands with a £63m investment. Many of the islanders are looking to ensure that they now build resilience into their infrastructure, taking the opportunity to create sustainable infrastructure and utilities and to develop skills across the population. They are talking about true sustainability, to be an exemplar in green energy and efficient buildings. They are considering whether larger runways will help in the future and want to ensure they have the education and training programmes for future generations to contribute to creating an environmental paradise – with the help of the UK’s construction industry. 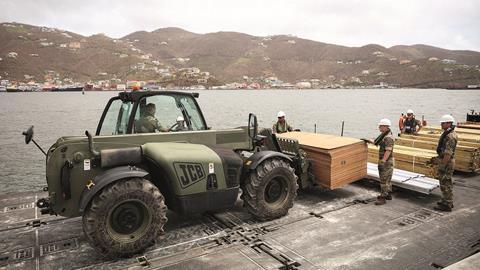