How Bam kept the noise down in the 12,500-seat arena in Leeds city centre 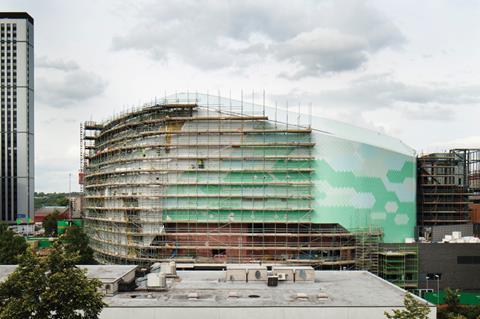 Forget battles of the bands, in Yorkshire the real war is all about whether Sheffield or Leeds can host the best entertainment arena. Sheffield already has a venue and is concerned that the new 12,500-seat Leeds Arena under construction 34 miles away in the city of Leeds is going to hit revenues when it opens next year. Sheffield is fighting back, citing its convenient location next to the M1 as an advantage, and adding that the Leeds arena’s city centre location will be a nightmare for music-goers. But Leeds sees a central location as a positive and believes the unique, fan-shaped seating layout around a stage at the back rather than the centre of the arena will give spectators the best views and acoustic experience anywhere in the UK.

However, the combination of location and acoustic performance did present problems - specifically, how to keep the noise at an acceptable level for those living close by. Planning conditions stipulated that external noise levels had to be 10dB lower than ambient noise levels outside the building, a criterion which doesn’t come cheap on a building big enough to swallow a football pitch. The job was tendered as a two-stage design-and build contract, after the council had worked up the design using its own team, headed up by Jacobs. Bidding contractors, which included winner Bam, had to satisfy themselves that the building could be delivered for the council’s budget of £60m. 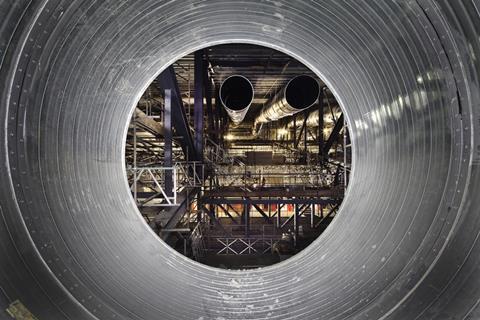 When Bam examined the council’s design, it worked out it was going to cost a budget-busting £67m, and there was no extra funding. The contractor was also concerned that the design, particularly the roof, was unlikely to meet the strict acoustics criteria. “We had concerns over acoustic data and the original roof build-up,” says Richard Beaumont, Bam’s design manager. “There were items missing which put the cost plan under considerable pressure, so we had to come up with an affordable plan.”

Getting the roof design right was crucial, given its size and the acoustic requirements. The original design relied on a panelised acoustic solution above the arena with a large gap separating a concrete outer layer. The panels were expensive, and there were doubts over whether they would meet the acoustics specification. Bam, together with acoustic consultant Arup saved money by proposing a more conventional built-up solution. This comprised a perforated liner tray supporting two layers of insulation, an 8mm-thick acoustic barrier sandwiched between two layers of plywood, topped by yet another
layer of insulation. The secondary concrete layer was retained. 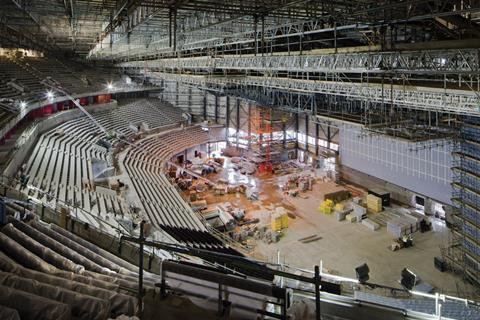 The main stage is at the back of the auditorium. It has a 55m-long and 10m-high proscenium truss which supports 70m-long roof trusses that are 7m deep

Bam also saved money by substituting the proposed external render with a kaleidoscope of 500mm2 metal shingles in different shades of green laid in a diamond formation. The expensive bespoke glazing was substituted with a more cost-effective Schüco system modified for the project. Bam now put in a tender for £60m, which secured it the job.

With the ink barely dry on the contract, Bam was out on site. “We were awarded the contract on 23 May 2012, a Thursday, and we started work on the Monday,” says Gordon Alexander, Bam’s construction manager for the job. The ground conditions were excellent, which meant piles were unnecessary; instead the building uses mass foundations sitting on rock.

This building is all about big numbers, starting with 4,200 tonnes of structural steelwork. It features a single-span roof, which is 70m across at the widest point; this is supported by 14 7m-deep trusses. The stage is located at the back of the building facing the seating with the stage box sitting outside the main roof. A huge 55m-long and 10m-high proscenium truss forms the opening to the stage and has to support the longest roof trusses. The only way to erect this truss was to build it on the ground and hoist it upright into position. 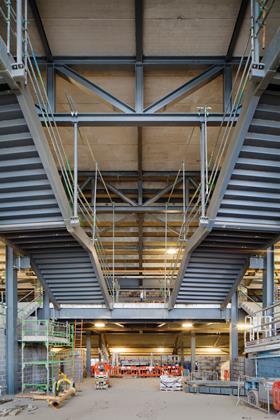 The truss weighs 180 tonnes, which meant two 500-tonne mobile cranes were needed to hoist it upright. Once upright it had to be secured to adjacent steelwork. “The cranes had to hold the truss in position for three days and three nights while the steel was fixed to allow the truss to become self-supporting,” says Alexander, adding that the cranes had to be manned 24 hours a day during this operation.

With the proscenium truss in place, steelwork specialist Fishers could crack on with erecting the roof trusses, a job done after the precast concrete seating bowl sections had been installed. Starting at one end, the trusses were assembled on the ground in two pieces, hoisted into position with two mobile cranes and bolted together at height.

The acoustic layer was installed on the upper side of the truss, then the concrete roof 12,00mm above this. The sheer size of the roof meant the concreting was a big, delicate operation. “The biggest concrete pump in the UK has a reach of 63m which wasn’t long enough to cover the whole roof,” says Alexander. “We had to install a lot of piping to get the concrete up, which was a job in itself.”

The original plan was to use a fibre-reinforced cement to simplify the job but the team found the wet mix needed for this product couldn’t cope with the slope of the roof. “We reverted back to using steel mesh which meant we could use a less viscous concrete,” says Alexander. Some 2,500 tonnes of concrete were needed to cover the roof.

The wall cladding, meanwhile, consists of dense precast concrete panels fixed to the steel frame; this is covered with insulation and profiled metal sheeting followed by the metal shingles. 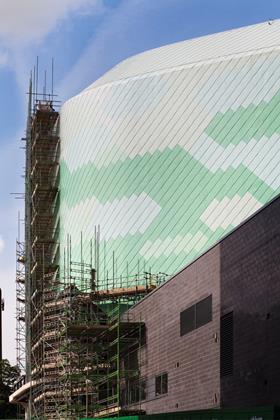 The original render cladding was substituted with these metal shingles which was cheaper and quicker to install.

“Once the frame was up, the biggest challenge was the M&E,” says Alexander. Enormous air-handling units with 3m-long fan blades sit over the stage box, which is lower than the main arena. A series of 2m-diameter ducts are fed through apertures in the dense precast concrete wall panels into the roof void where the ductwork can be distributed around the roof.

The only way to safely install the M&E in the roof void was to put in place a crash deck, suspended underneath the whole roof. This scaffolding contract was worth £1m and includes 10,000 scaffold boards. It took 16 weeks to install and will need another 10 weeks to dismantle once the roof-space installation is complete. Open slots have been included in the scaffolding which allows plant to be winched up into the roofspace. Equipment has to moved around the roof space manually, with small hoists used to winch bigger items into position. “It’s very difficult,” comments Alexander.

Below, the seating is being installed, which is a six-month job. The fit-out is advancing in the public areas and the covered service yard behind the stage is under way. The back-of-house areas are a straightforward job, as these are bare rooms devoid of any fittings - bands bring their own fittings, furniture and even kitchens to a venue. A man on a chair with an acoustic guitar on stage may have 10 articulated lorries parked out the back. The lorries will be able to drive right into the stadium to unload.

Bam is scheduled to finish the stadium on 25 March 2013 and it will open to the public in summer next year. Then we will find out whether Leeds has won Yorkshire’s war of the arenas.

The complexity and size of this job persuaded Bam to use it as a Building Information Modelling (BIM) trial project. It wanted the design team and supply chain to use BIM and monitored how much time and money it saved by comparing it to an earlier Leeds Metropolitan University project which employed the same project team. Engineering consultant Arup was happy using 3D modelling but architect Populous was still using 2D drawings. Some of the supply chain including steelwork specialist, Fishers, precast specialist Creagh and cladding specialist Lakesmere were already using 3D modelling.

Bam calculated that by drawing virtually in the BIM model, it saved the issue of 9,000 drawings. It also cut back on the need for design meetings by 75%, which saved 1,500 hours. The total design time saving added up to 15,000 hours. This had the added benefit of saving the 60,000 miles that would have been crossed travelling to those meetings.

According to Bam, a job of this size would typically involve 1,000 major site-based clashes. It reckons that 90% of these would be discovered during the design phase with 100 slipping through the net. Bam estimates that each clash would cost an average of £3,500 to resolve on site which adds up to a theoretical cost of £350,000.

Have these costs been avoided on site? “BIM has made a tremendous difference and was highly beneficial for the structure,” Alexander says. He says there were only two clashes between the steelwork and the precast elements. Some of the steelwork was too high in one area and a few of the angles used to support precast elements were in the wrong position. “It was a day’s work to reposition these,” he says.

Installing the walkways needed in the roofspace for accessing the M&E installation was made much easier through the use of 3D modelling. Convention dictates that the contractor leaves this to a specialist, who comes along at the end to fit the walkways. But Alexander says they were integrated into the design and fitted much earlier by the steelwork contractor, Fishers. “We identified quite a few clashes between the walkways and the structure and the ductwork,” he says. “It would have been a nightmare and very costly to do these afterwards.” Fishers also installed the steel stairs in the public circulation areas instead of these being done separately.

Alexander concedes that BIM had shortcomings when it came to the fit-out. The blockwork and steel structure is left exposed in the public areas. Small blockwork ties are visible on the corners where these interface with the steelwork and weren’t picked up in 3D. A cover detail will be needed on the corners to disguise these. Additionally there are large tie bars in the way of some of the blockwork walls. Originally the blockwork was going to be taken up to the ceiling but will now have to be terminated below the tie bar and the gap filled in with plasterboard.

Overall Bam’s design manager Richard Beaumont judges this project to be a success: “All our new projects will be run using BIM,” he says.