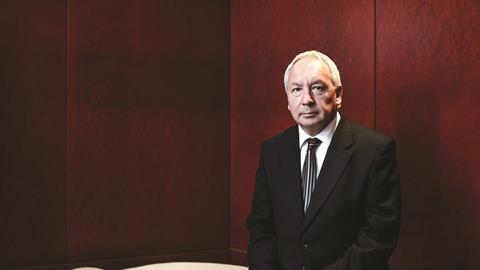 Two years ago Crest Nicholson almost came a cropper under a deluge of debt. Chief executive Stephen Stone tells Building how its buy-out, and some sheer nerve, has enabled it to stay around

The last time Building interviewed Stephen Stone he’d been put through the wringer. His company, Crest Nicholson, had almost fallen into bankruptcy only to be saved by a last minute refinancing through a consortium of banks.

Just two years later, it’s tempting to say the story’s not that different: his refinancing turned out to be a stop gap, leaving Crest in almost £650m of debt to 24 finance institutions. Stone says of the period: “It’s not an experience you’d like to repeat. If you’re dealing with four to five banks it’s easier to get a consensus. If you’re dealing with 25, as we were, you have to work harder. It was a challenging experience.”

However, a sale to private equity firm Varde, completed with another refinancing in September this year, seems to have put the episode behind him. Tanned and relaxed, Stone looks like a man who’s got a monkey off his back. With money in the bank and an ambitious expansion plan, Crest Nicholson’s chief executive says the firm is well and truly back. But given the rollercoaster of the financial markets, maintaining success over the next three to four years is going to be as much as a challenge as negotiating the credit crunch. “We’re in uncharted territory right now, whether we’re going to bump along or [enter] a serious double-dip recession,” he says.

So what kind of shape is the firm in to navigate this and how does it plan to grow?

When the tide of credit ran out in 2007/8, Crest Nicholson was one of those found not to be wearing any swimming shorts. With £950m of debt from its £1.2bn purchase by HBOS and Tom Hunter in 2007, it was exposed as soon as credit dried up.

Sales rates halved overnight, meaning that from completing 3,200 homes a year at the height of the boom, it now builds just 1,600. Half of its staff were cut at the same time as it put land purchases on hold, effectively hibernating for almost two years as the storm raged.

A prospective rescue by acquisition vehicle Horizon collapsed when a price could not be agreed. The first refinancing by 24 finance institutions, many of whom never wanted to own a housebuilder in the first place, saved the firm. However, the resulting complex ownership, coupled with the remaining debt, kept it out of the land market for 18 months longer than its competitors. “Our underlying position was very strong, at either gross margin or quoted profit level,” Stone argues. “The problem with Crest is we went from a company that had £150m of debt to one that had £1bn of debt in a falling market.”

Then came this year’s deal.

Minneapolis-based Varde, a shareholder since 2008, spent this year buying up the bulk of Crest’s debt from the banking consortium. It then performed a debt-for-equity swap for £350m of it, leaving Varde with a 60% stake. Five or six banks have the remaining 40%. “We’ve gone from a position of £100m negative assets to around £200m positive,” Stone says. Crest still has borrowings - of £150m - but this leaves its gearing lower than it was when publicly listed, and it has £100m of cash in the bank to spend on land.

And there’s an incentive for Stone in that deal. Crest’s management team has lost its (previously 10%) stake in the business, but in return Stone and his key team will get a 10-20% equity share of any growth in the business beyond Varde’s purchase price, dependent on how much growth is achieved. Stone declines to say what the deal valued Crest at.

Being free of all that insecurity clearly puts East End lad Stone in a more chipper frame of mind. In a fairly impromptu meeting at a Costa Coffee near the O2 centre, just down the road from the firm’s 295-home joint venture site with Meridien Delta, Stone is keen to lay out his expansion plan.

He wants to grow the business by 50% over the next three to four years, bringing it to a level where it is building and selling up to 2,400 homes a year. This will be achieved, he says, through a focus on core markets that are more profitable in the South. A London office has been set up for the first time, headed by Countryside veteran Trevor Selwyn. Areas outside this where Crest has previously been strong, such as the Midlands, Stone describes as “legacy sites” and no new land purchases will be made.

Growth will come from upping the number of sites sold, from the mid-forties to as many as 65. And while he admits he’s not going to go back to high-rise building, Stone is unlike other major builders in remaining happy to take on big regeneration schemes, such as the 1,000-home Western Riverside in Bath. “We just can’t roll out all greenfield land; 86% of what we did last year was on brownfield, and going forward it’ll be 70%.

“We see regeneration as a big part of our future business and a differentiator. We spent 10 years learning those skills, and even through this downturn we’ve been pretty successful.”

The main, and rather refreshing difference, is he’s now primarily selling to owner-occupiers rather than buy-to-let investors. “The days of the 30-storey blocks of flats, except in London, are a thing of the past. Now it’s controlling the amount of build spend, and matching our sales rates to the market.”

Rather than the market or the banks, it is planning that seems to get Stone most exercised. He is supportive of the thrust of the government’s proposed planning framework, and says that half of councils are responding positively, even some Tory shires. However, talk of delaying the proposals has him worried. “What would be a tragedy is if the government said there’s an impasse, and ‘local authorities you’ve got two years to produce your plans,’ and in that time nothing will happen. A long period of uncertainty would be bad for economic growth.”

So what has he learned from Crest’s painful experience? First, that he’s tougher than he thought; he can “take the knocks” but remain focused. “The human tragedy of making people redundant has to be the hardest thing I’ve ever had to do.” But his faith in the underlying business never wavered. So Crest Nicholson, with its reputation for regeneration and quality developments, will brave the coming storm without a fundamental rethink.