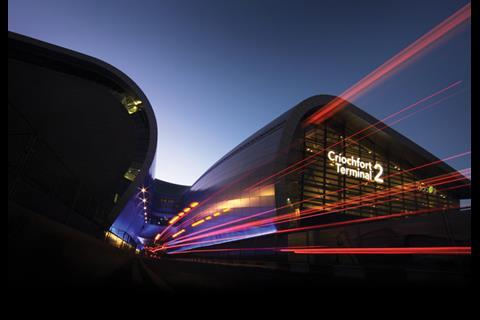 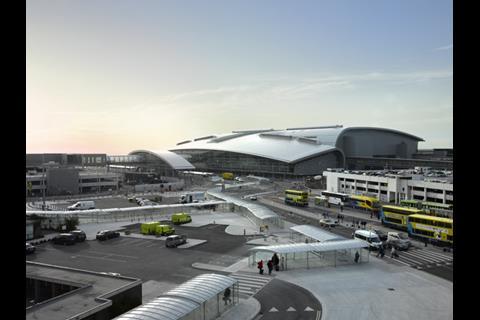 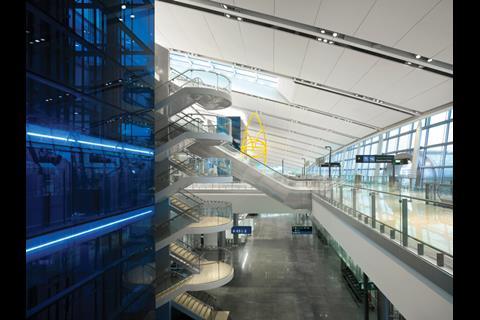 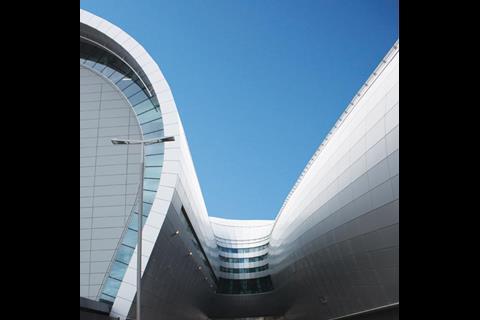 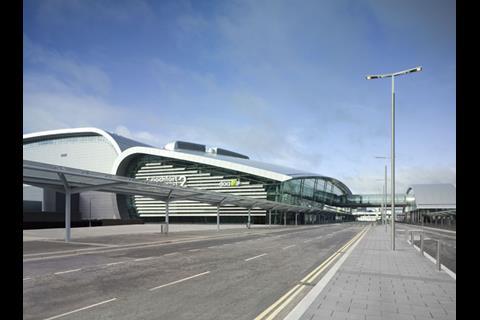 ﻿Dublin airport’s new Terminal 2 consists of three different elements, straddling a road. What unites the building is the curving roof form - made up of more than 300 flat panel shapes. Stephen Kennett meets the designers

﻿Providing Dublin airport with a 75,000m2 second terminal was always going to be a squeeze. The site is boxed in on three sides by other buildings and the runway, while the main access road runs along the fourth side.

Architect Pascall + Watson’s design creates space by straddling the road with a 45m-wide bridge, linking the check-in building on one side with the arrivals and departures halls on the other. While this had a lot of advantages, says architect Paul Ruggles, it did leave the problem of how to unite the three volumes.

The answer was to use curving roof forms which sweep down to screen the road while flowing seamlessly into the bridge.

“It meant the buildings were turning their backs on the road where there was noise and fumes,” says Ruggles. “We could also glaze the front of the north-facing check-in building and glaze the airfield end of the main terminal building to give views out.”

But these intersecting curves had to be relatively simple to build, given that the construction programme was a tight 34 months. This was the challenge for structural engineer Arup.

The check-in hall was particularly difficult as its roof has a double curvature. One option was to design it as a shell or space frame. This is an economic use of materials but only works structurally when all the key components are in position.

“With these types of roofs you have to build gigantic temporary works and we didn’t want to do this as it would have been expensive and time consuming,” says Arup’s Steve Roberts.

The team opted for a straightforward column and beam “stick system”, which was much easier for the contractor to erect and meant there were few constraints on the construction sequence.

﻿The curve is so gentle it doesn’t look faceted. People think the panels must be curved but every panel is flat and every edge is straight

When Arup came on board at the design stage, it began by rationalising the geometry so that the steel beams all curved to a single radius. This made the procurement and fabrication much more straightforward.

Because of the length of the spans, more than 27m in some cases, plate girders have been used for the primary beams that stretch between the perimeter columns. These are over 1.5m deep in places but as Roberts points out, they are readily available at a reasonable cost which was an important consideration for the build programme.

Pascall + Watson added an architectural flourish to this simple structural solution. As well as the pencil head columns, which make it look as though the roof is delicately balanced on points, the underside of the primary beams are exposed on the inside. To make these appear more slender than they really are, the bottom flange of the beam has been replaced by a much narrower steel tube.

Tackling the envelope also took some lateral thinking. The idea was for a lightweight finish to help keep the supporting structure to a minimum. A standing seam roof would appear the obvious solution, but Ruggles says this wouldn’t have given the smooth, sculptural finish they wanted.

Instead, the building has been cloaked in silver Alucobond aluminium rainscreen panels which hide a Kalzip substructure (see box below).“We came to this solution through discussions with the structural engineers and contractors about buildability and longevity,” says Ruggles. Poor air quality at airports inevitably leads to stains where rainwater collects on exterior surfaces. With the rainscreen, water is channelled behind the panels, minimising the likelihood of any discolouration.

﻿Measuring about 1m x 3m, the panels are attached to a channel which is supported on steel brackets connected to the standing seam of the Kalzip with a specially designed clip. Importantly, this avoids the need to penetrate the roof’s waterproof layer. The difficult bit was creating the finished form using only rigid flat panels with straight edges.

Pascall + Watson started by modelling the entire envelope in 3D to come up with a layout that minimised the number of panel shapes. “I think we have been working our way up to a project like this, it relied on us modelling the entire building at the beginning to make sure it would work,” says Ruggles. The process reduced the number of panel shapes to 351, with the most variations around the torodial section forming the link bridge.

Delivering the design on site required close co-ordination between steelwork contractor Watson Steel and cladding contractor Martifer. They shared the same computer model of the envelope and the steelwork package was split, with the tertiary steelwork given to Martifer to enable it to fine-tune the structural frame for the building skin.

The loose-fit nature of the rainscreen system meant the panels could be installed with a nominal 20mm gap, then adjusted to get the perfect fit. “The variation in the gap between panels can’t be read from the ground,” says Ruggles. “Because the curve is so gentle it doesn’t look faceted at all. People think the panels must be curved but every panel is flat and every edge is straight.”

Value engineering did come into play. The intention had been to cloak the entire check-in and main terminal in the panels, but this was scaled back on the main building to those areas visible from road level.

But Ruggles is more than satisfied with the result. “Knowing you can take complex geometry, simplify it and still make it look great is what matters. I think it is a building of its time; it is only possible because we have the computer technology to do it - not just us but the contractors as well. Ten years ago we would have struggled to do it.”

﻿Aesthetics was only one of the issues driving the roof specification for Dublin airport’s Terminal 2. Acoustics, thermal performance, maintenance and buildability all had to be considered. The result is a roof built up of eight separate layers.

A structural steel deck sits between the secondary steel beams. In some places these spans exceed 9m, which pushes the capacity of conventional decking to its limits, even more so given the extra load of the rainscreen cladding.

Above the decking sit two layers of 10mm thick cement particle board, which help reduce noise penetrating into the building. On top of these is a vapour membrane and 200mm of Rockwool insulation which provides additional sound insulation as well as thermal insulation ﻿ thermal insulation. The Kalzip aluminium standing seam panels provide the weathering layer which is overclad with the Alucobond rainscreen.

Beneath the structural deck there is an acoustic insulation layer and an acoustic liner tray to modify internal noise. Most of the underside of the roof is then hidden by tensile fabric mesh ceiling panels.

Paul Ruggles, architect with Pascall + Watson, says the beauty of the solution is that it wraps around the entire building, creating an incredibly well insulated envelope with a U-value of 0.18W/m2K and a sound reduction of 47-54dB depending on the noise frequency.