Ucatt: Out for the count? 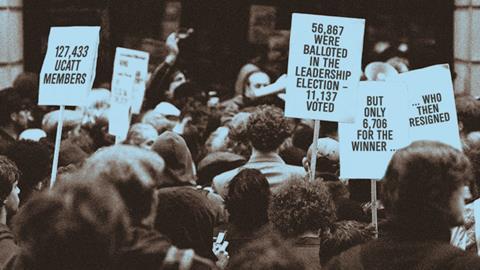 In 2009 Alan Ritchie was voted leader of Ucatt - put there by 5.3% of its membership. But now the ballot has been ruled void and the union is having to spend its time appealing the decision and salvaging its reputation. How did it get into this mess?

Construction’s largest union is in turmoil, in what many think is one of its most crucial years. Just when Ucatt’s attention should be focused on the battles looming over cuts to the Health and Safety Executive and defending workers’ rights as contractors push construction of the Olympics to meet tough deadlines, it’s embroiled in a potentially damaging piece of infighting instead. The union is reeling from a watchdog verdict in March that declared its 2009 leadership election was void, forcing general secretary Alan Ritchie to resign.

Ucatt was ordered to re-run its election so that a result is declared no later than 29 July if there are two candidates, and 30 September if there are more - although a subsequent appeal by the union has thrown this timetable into question.

So, what went wrong and what is the impact of this annulled election on Ucatt’s reputation?

When the highly respected (and occasionally feared) general secretary George Brumwell stood down in 2004, he left a gaping hole at the heart of the union. His heir apparent was the wily Scottish regional secretary, Alan Ritchie. As a close lieutenant of Brumwell, Ritchie was seen as the establishment choice, if controversial in some quarters.

A source close to the union said: “George Brumwell’s desire was that his place be taken by Ritchie.”

A rival emerged in London regional organiser Mick Dooley. Ritchie defeated Dooley in 2004, but they faced off again for the 2009 leadership contest - the fallout from which still reverberates today.

Ritchie won the 2009 election contest by 6,706 votes to Dooley’s 4,431, on a dismal turnout of 9% of the union’s membership. Dooley cried foul, claiming that the low turnout reflected the fact that ballot papers had not been sent out to a large number of members.

In a further twist, following ongoing disputes with the Ucatt leadership, Dooley was this year sacked as a regional officer for alleged “gross misconduct”. Dooley, who will challenge this in an employment tribunal in June, says the sacking revolves around allegations of falsifying membership forms.

In December 2009, he referred the election to the union watchdog, the Certification Office for Trade Unions (CO). In March the CO returned its damning verdict - the 2009 contest was declared void after it was found that ballot papers had been sent to only 56,867 members out of a claimed membership of 127,433.

Despite the watchdog ruling that the union had disenfranchised over half its members, the union lodged an appeal against the decision last month. Dooley for his part has announced his intention to run if the contest is re-staged, and lambasted the union for using what he terms “delaying tactics”.

Ucatt is appealing because it feels its rule book always allowed it to exclude those members who are over 26 weeks behind in membership payments from voting. A union spokesperson said: “The union has always taken the view that unless a member keeps up to date with contributions, he or she should not be permitted to vote in the union’s elections.”

But the debacle has raised a new controversy about the size of Ucatt’s claimed membership. The CO’s ruling shows the union sought to argue to the CO that the 70,000 members excluded in the 2009 contest were not, in fact, members of the union. Critics of the union have suggested this was a tacit acknowledgement by Ucatt it has overstated its membership for years.

Dooley said: “The union has to face up to the fact that it’s quite insignificant. It’s been trying to play with the big players in the field but unless you’ve got a true picture of yourself you’ll never change.”

In its judgment, the CO rejected the union’s submission that the 70,000 who were excluded from the 2009 leadership election were not members of the union. It said: “Such an interpretation would sit uneasily with the union’s statement [about its membership total].”

One source at union Unite said there were doubts about Ucatt’s membership figures. He said: “The feeling is Ucatt has attempted to keep on to membership that a traditional union probably wouldn’t have done, in order to get a seat at the top table of the TUC.”

Ucatt declined to comment on these or any of the claims.

The controversy has raised fresh doubts about the membership status of the thousands now barred from voting in elections. Dooley indicated he would challenge Ucatt’s assertion that members behind on their subs are prevented from voting if he won an election re-run.

“It can’t be right that this attempts to disenfranchise 56% of the membership. I’ll challenge that; it must be put to the membership,” he said.

Ucatt member and safety campaigner Tony O’Brien also questioned this, claiming that it may unfairly catch out members moving from job to job. “This is a casual industry with people moving from one site to another and people can easily fall behind on payments,” O’Brien said.

Fallout for the union

Some industry figures claim the union’s infighting is already damaging its reputation. One director at a major construction industry federation said the dispute had distracted the union, aiding employers’ negotiating position. “It’s been nice as it’s become engaged in these internal disputes. Once they’ve sorted themselves out we can talk constructively with them again.”

Firms used to sitting across the negotiating table from Ucatt will be watching to see how the union resolves its leadership crisis.

The federation source added: “Alan Ritchie was recognised as someone we could generally do business with. The concern is that the hardcore rank and file will want people who will bang tables and cause a stir.”

But another federation director suggested he had seen “no practical effect” from the clash, adding: “It’s in everyone’s interests that we have a strong and competent union.”

And in nobody’s more so than Ucatt’s members, who must be concerned that the prospect of a protracted appeal and leadership election will take the union’s eye off the issues that matter to them.