Will the Olympics mean other projects in London get delayed? 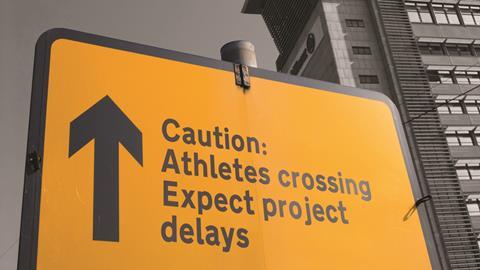 Traffic restrictions set for the six weeks of the Olympic and Paralympic Games are designed to help cope with unprecedented levels of visitors to the capital. But could London’s other construction projects end up in a jam?

The construction industry has a huge amount to thank the UK Olympics for. Over the last six years more than £7bn of construction spend has kept the industry afloat when all around other government and private schemes were sinking under the recessionary waves. Not only that, it has given an industry still haunted by perceived failures such as Wembley stadium and the Jubilee line something to be rightly proud of. But despite all this good news, some contractors and consultants fear that London 2012 might be about to deliver a nasty sting in the tail.

The problem lies with the proposed programme of road closures and traffic restrictions set for the period of the Games, coupled with the extremely high visitor levels predicted in the capital. With a number of arterial road routes partly cleared for Olympic and Paralympic traffic, huge travel-time delays predicted and parking - including loading - banned within a mile of Olympic venues, the impact on some of the highest profile construction schemes in the country could be severe, and could cause a very nasty legal headache. Some developers are now so concerned that they are delaying or reprogramming projects to avoid the six-week period of the Games, potentially impacting on the health of the vital £14bn London construction market. So how bad is the problem? And what is the industry doing about it?

The answer to the first question is unclear, to say the least. At the end of last year Transport for London (TfL) published the final version of its Olympic Route Network, which details many of the restrictions that will be in place. For sites which actually sit on the network itself or are near the venues, there could be considerable logistical issues, as not only is stopping and loading banned, but many turns off the roads will be prohibited. However, other projects could also face disruption from increased congestion due to restrictions and additional traffic nearby.

This is so key because certain phases of construction programmes, such as excavation or demolition, require huge amounts of site traffic, while other phases, such as concrete pours, require precisely timed deliveries - to ensure the concrete doesn’t go off before the pour is completed. Local authority permission to close a road to allow a crane delivery and erection is also likely to be tough to get.

Bob Dempsey, operations manager at construction logistics firm Wilson James, is working with customers to mitigate the problem. He predicts that travel times for a typical 10-mile journey could increase by an hour, almost three times the current length, even outside the rush hour. “TfL is working hard with people to maintain business as usual, but those who are sensible will realise it’s just not going to be possible.” At the same time, with waits to board a tube train predicted at over an hour at some London stations, site staff may struggle to make it to work at all.

Those trying to mitigate the issue by working outside of normal hours may not face an easy ride either. Most planning permissions in built-up areas contain restrictions around working hours to avoid nuisance to nearby occupants, and under the London Lorry Control Scheme any traffic from 18-tonne-plus vehicles requires specific consent outside of working hours. Noise-producing demolition and muck-away contractors could face particular difficulties getting the required permissions. Helen Garthwaite, head of construction at law firm Taylor Wessing, says: “If the contractors want to get on site early, then they have to have an early dialogue with the local authority to manage that - which means talking to them now.”

TfL itself is working with all major construction sites on a one-to-one basis to try to mitigate problems, and has launched a programme of workshops to advise firms on how to keep their businesses going. It is also advising developers to think again about the timing of their plans. A spokesperson said: “This is about developers realising that there’s going to be a whacking great event in London, making it a completely different city. For your business it makes sense to avoid doing things during those times.”
Developers are taking this to heart. Albert Taylor, director at engineer AKT II, is one of many to say he knows of clients delaying or reprogramming projects. “Clients are concerned and they’re looking at their programmes,” he says. Demolition and excavation on a scheme that AKT II is working on in Stratford has been delayed until after the Games. Likewise, work on Crossrail will be curtailed, with the construction of the Pudding Mill Lane tunnel portal and relocation of the station halted between May and September.

All of which is adding to the gloom of some in the industry at a sensitive time. One senior figure at a major London contractor said: “It’s like queuing up at the headmaster’s office. You know you’re going to get your arse slapped, you just don’t know how hard.”

This painful slap can undoubtedly be mitigated through careful planning. But those contractors who don’t think ahead could end up seriously out of pocket. Lawyers disagree over exactly how liable contractors are for liquidated damages for project delays - but Taylor Wessing’s Garthwaite says that additional costs, such as paying for out-of-hours work, will fall squarely on the contractor, unless the contract dates from before 2006. Nevertheless, some more recent contracts in the capital have specific clauses making it clear where the risk lies. Gerry O’Brien, director at AKT II, says: “As far as developers are concerned, they’ve passed the risk on - and actually contractors are best placed to manage it. My sense is that the big ones have thought about it, but that there are lots of little ones that will suddenly sit up and panic.”

For John Price, operations director at demolition contractor Keltbray, it is the uncertainty that is the biggest problem. “It is a big worry. Because, while we know everything that is going to happen in terms of the route network, you can’t predict exactly how it will unfold. It’s never been done before.”

For the construction industry, this sticky problem comes at an awkward time. News of the Pinnacle development going back on hold last week underlined waning confidence in London’s commercial development market - currently the engine of the construction economy. Contractors and consultants need to work hard with developers, TfL and London boroughs to ensure this temporary diversion doesn’t turn into a major roadblock.

The six-week crawl
The Olympic Games runs, in the capital, from
27 July to 12 August, with a two-week break before the Paralympic Games which starts on
30 August. The closing ceremony of this is on Sunday 9 September, making a total of more than six weeks from start to finish. Under the terms of the London Olympic and Paralympic Games Act 2006, Transport for London has published its plans to impose temporary road restrictions designed to clear the way for athletes, press and Olympic officials to get to the Games. It will see dual carriageways restricted to one lane only, with no right-hand turns and no stopping. The core Olympic Route Network will be in force from two days before the beginning of the Games until two days afterwards, with restrictions for other venues only in place during competition days. TfL says 30% of travel in London could be affected, despite the fact the changes will be imposed on just 1% of London’s roads.