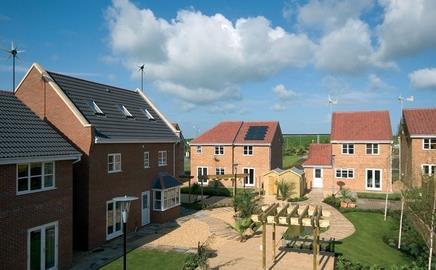 These houses have had all manner of wonderful energy-saving technologies fitted to them by housebuilder Barratt. But are they any good and are they worth spending money on? Barratt asked researchers at Manchester university to find out …

How well do low-energy and micro-generation technologies work? This question is being asked up and down the land as the industry struggles to get to grips with the Merton Rule, which requires new developments to generate 10% of their power using on-site renewables, and as housebuilders anxiously prepare for the Code for Sustainable Homes. There is plenty of anecdotal information around, such as that wind turbines don’t work in urban areas or PV panels cost so much that the power generated never repays the upfront cost. But there isn’t much in the way of concrete evidence.

Housebuilder Barratt Developments decided to find out for itself by trying out a range of low-energy technologies on a real development, its seven-unit Eco Village in Chorley, Manchester. “The object of the exercise was to see if these technologies actually worked on our homes, rather than listening to the claims of the manufacturers,” explains Terry Ritchie, Barratt Developments’ technical director.

A wide range of technologies were tried out, and several examples of each technology were monitored – for example, five micro wind turbines were installed. The University of Manchester monitored the outputs over a 15-month period, and on the left we present the results of the research carried out by Dr Tony Sung, lecturer at the school of mechanical, aerospace and civil engineering at the university. Sung calculated a payback period for some of the technologies, although this is a simple calculation that does not take account of the effects of inflation or lost opportunity costs had the money been invested on something else.

Five micro wind turbines supplied by two different manufacturers were fitted at Barratt’s Chorley development, a site described by Manchester university’s Dr Tony Sung as “very windy”. One turbine was faulty and the others produced “really low readings”. Sung says, theoretically, the wind turbines should have performed much better. “According to the wind resources we have, wind turbines definitely have the potential to reduce carbon emissions, but the design needs to be improved,” he says.

Sung says further work is needed to identify precisely why performance is so poor, but he thinks it is something to do with the interface between the turbine and the electrical system in the house. Wind turbines need a variety of devices to regulate the output and to convert it into mains current suitable for use in the home. Chris Twinn, a director at engineer Arup, says these devices are frequently crude and need further development.

Three identical arrays were tried out. Each array consisted of 8m² of PV with a peak output of 1.04kW. The arrays were fitted on different homes and faced in different directions. The panels were monitored for a year, from the beginning of June 2006 until the end of May 2007. Sung points out that the summer of 2006 was very good, and the arrays were maintenance-free.

Three ground source heat pumps were trialled. Manufacturers claim that ground source heat pumps produce between 3 and 5 units of heat for every unit of energy used to run them. Sung said the systems worked very well, although his figure for the co-efficient of performance was only 2.6. Sung said fitting the pumps was “still worth doing”. A £7,800 system will reduce a home’s carbon emissions by 62% and has a payback period of 15 years.

However, Sung says this doesn’t make much difference in practice; to take advantage of the greater efficiency of the evacuated tube collector, a second tank would be needed. “Paying another £1,000 doesn’t give you any real benefit,” he says. He describes the solar hot-water system performance as “reasonably satisfactory”. There is no payback data available.

Two micro combined heat and power units were fitted to two homes. These were Whispergen units made by electricity supplier Powergen, which have been tried out in a number of places. They replace a gas boiler and generate both heat and electricity. They have the potential to reduce carbon emissions as the unit generates electricity more efficiently than at a central power station. Sung says the units were trouble free, although there have been reports of problems on other sites.

For more on low carbon development, go to www.building.co.uk/sustainability