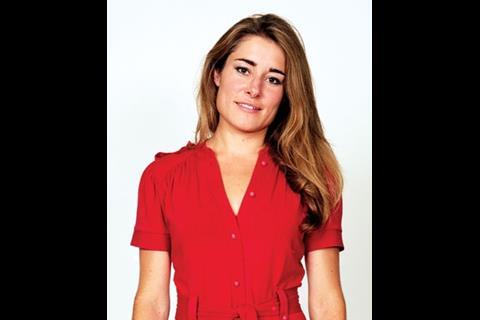 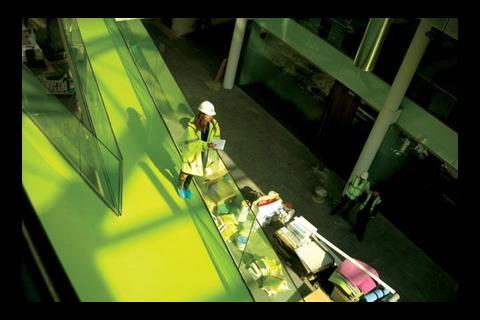 “The day of practical completion, and still so much to do“ 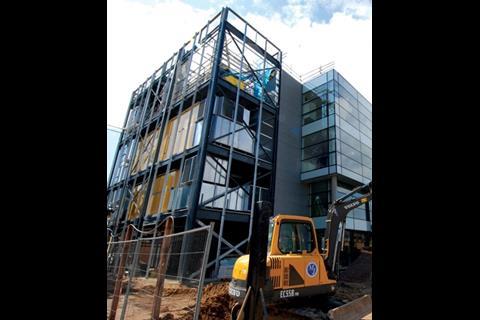 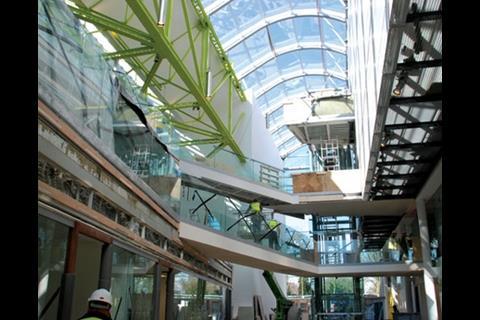 Sophie’s favourite view in the building, where the old hangar meets the new lab block 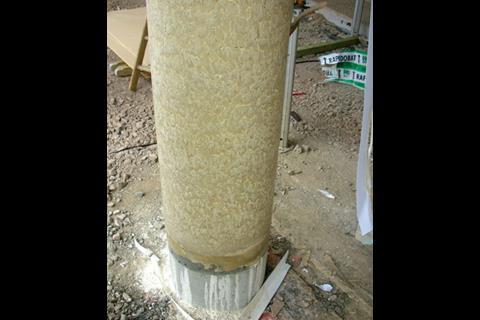 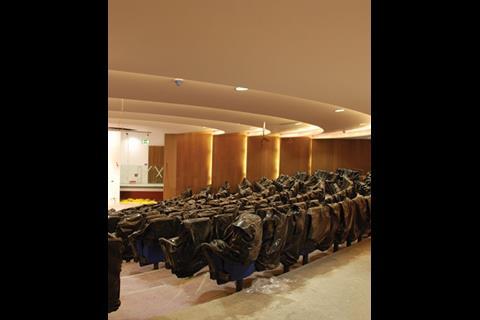 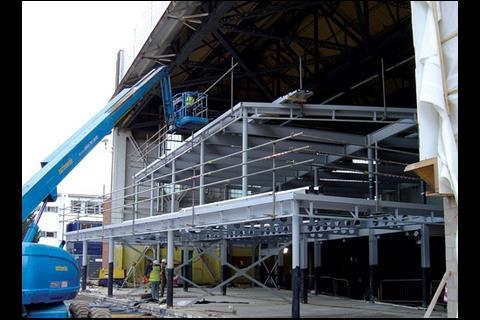 The skeleton of the ziggurat peeping out from the hangar 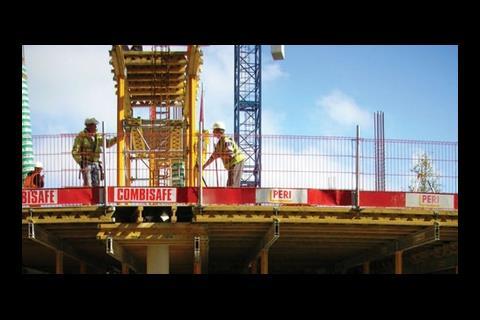 The concrete structure being poured in place 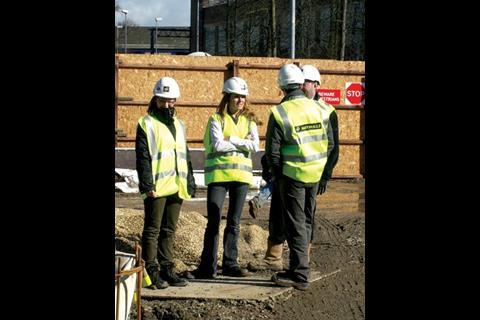 On site with the Sheppard Robson team in Spring 2007 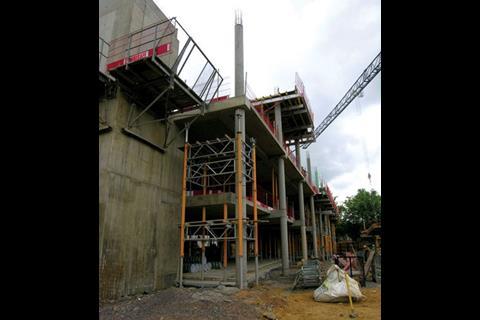 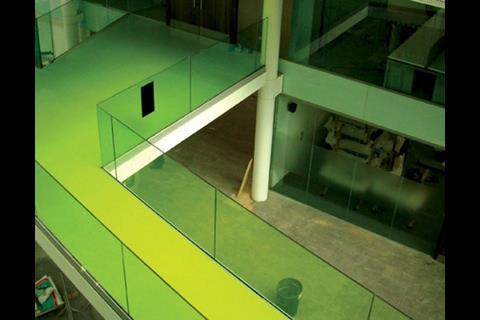 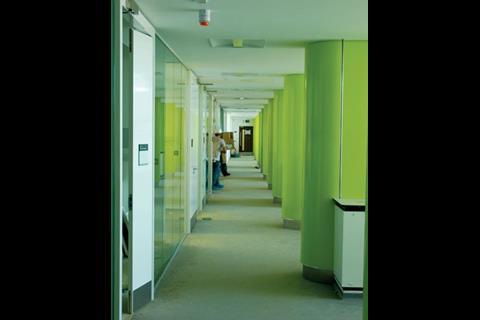 The specialist labs on the second and third floors

Sophie Campbell, architect at Sheppard Robson and a member of Building’s editorial advisory board, tells the story of what happened when her project leader left the firm and she had to step into his shoes

May 2006 I am introduced to my new project leader, who has just joined the firm and will be running the Building 52 project in Milton Keynes. The team consists of me and him. The job is to give the University of Cranfield a teaching facility by refurbishing and extending an aircraft hangar. It will comprise teaching areas, an auditorium, a cafe, offices and two floors of laboratories. I’m really excited by this project. It sounds like a challenge, especially as I’ve never tackled a building of this scale in a senior role.

July 2006 We come up with a great idea. We want to treat the void in the old hangar like a gallery space. We plan to insert a three-storey ziggurat of teaching rooms into the vast space so that it stands clear of the hangar walls and can be interpreted as a sculptural mass. This would be a bold statement that would definitely improve the scheme, but it means convincing the client to move away from the concepts we sold them back in February.

Fortunately, the client loves our idea. And so we move on with even greater enthusiasm for the project …

August 2006 As the workload grows, so does the team. There are now seven of us, including the design director. It’s a well-balanced team, with two experienced safe hands to guide the more junior members.

October 2006 Owing to the tight programme on this job, the work is being tendered in packages, with priority given to those activities that go on site first. The team is working flat out to meet the tender package deadlines so the contractor can tender immediately.

November 2006 Bits and pieces of enabling works begin on site. It’s unbelievable to think that six months ago we had just started to draw concept ideas. The speed of the process barely gives you time to take stock.

January 2007 January brings freezing conditions on site and the shock news that my project leader is leaving the firm. My boss informs me I will now lead the project. My initial reaction was fear, but it’s gradually giving way to excitement at the prospect of running my first job. It’s still daunting to think that all members of the team, bar one, are older and more experienced than me.

February 2007 My timing for a three-week holiday could not have been worse, as things really get going on site. I frantically attempt to learn project procedures and protocols before I head overseas, in preparation for what will be waiting for me on my return.

Three of the hangar doors are removed. This is a special moment as the internal void we are using within the hangar is properly revealed for the first time. My first reaction is that the space looks far too small to fit the three-storey ziggurat, while maintaining the feeling of openness around it, and I can’t help worrying about the accuracy of the survey. I return to site with a colleague to remeasure in an attempt to settle my concerns. On further inspection, we suspect that no survey has been carried out on the current hangar as the drawings show the original structure and not the situation we have in front of us!

March 2007 Incredible holiday travelling the full length of Vietnam from the mountains on the China border to the Mekong Delta. Perhaps lazing on a beach would have been better preparation for the onslaught of unpredictable work coming my way.

My first day back in the office. I sit down at my desk feeling that mix of excitement and terror again. I was already anxious to earn the respect of my team given my relative inexperience, let alone in the role of a project leader. I have to chair meetings in a tiny site hut with 12 men, at least half of whom are my father’s age. It’s pretty intimidating…

April 2007 A tough month as we come across some big issues. I inspect the quality of the white concrete column structures on site. As the form work was unzipped and revealed to the eager team, a disappointingly brown marbled column is unveiled. It would have looked more comfortable on a Roman ruin than here in Milton Keynes. I suggest that we strike another column in the hope that this is just an anomaly. Granted, these columns will dry out and get a little lighter, but from brown to white?

Unfortunately, the others are just as bad and ugly-faceted aggregate is showing through our smooth, curved surfaces. I know they should be ripped out, but facing the implications of further delaying a cut-throat programme by condemning all 23 columns is not something I can declare confidently and lightly. I speak with my boss, the design director, and the engineer for reassurance that I am making the right decision.

Ten days later, sample block-crushing tests reveal that the columns aren’t up to scratch structurally. It’s kind of a relief because it feels easier to condemn them on these grounds rather than just aesthetic reasons.

May 2007 Two months into managing a team of four and I’m beginning to feel like I’m getting the hang of it. I’m a lot more confident running meetings in the cramped site hut. I’m also learning so much from my team in the office and from the guys on site. The foreman really appreciates our intentions and our focus on design integrity, so I have been open to his advice. This makes a refreshing change as it certainly hasn’t always been my experience on site.

June 2007 Finally, all parties to the contract sign and seal it, more than one year after winning the project!

The skeleton of the building is apparent for all to see now and it’s a particularly exciting time to be on site. I love arriving there in a taxi and catching fleeting glimpses of the rising building. The pedestrian’s view really interests me, as I like the idea of trying to interpret the building from the point of view of a passer-by who does not have an inherent knowledge of the design ideas.

October 2007 I am taken to France, with two other team members, to see our glass lifts on the factory line. This isn’t just the jolly we anticipated; in fact, it turns out to be a highly informative trip. Although we specified a scenic lift, it appears that our perfectly formed enclosure is to be festooned with a mass of colourful cables. Luckily, we are able to conceal them in boxes and request that all cabling, where possible, should be directed through the hollow steel sections of the lift structure. I learn that inspecting samples beforehand is imperative to ensure that laboured-over details are not lost.

January 2008 The project should have finished last month. The sad state of the site hut furniture confirms this; at the past two site meetings chairs have collapsed, sending people tumbling to the ground. Fortunately, the CDM co-ordinator is not present. It’s just me on the project now, as the old team have moved on to new projects and it does feel a little lonely without them.

February 2008 The last few months on site have been pretty frustrating because the project should have been completed by now and it feels like there are fewer site operatives here than ever.

April 2008 I’ve just come back from a short holiday and in the space of three weeks the B52 has been transformed. It really doesn’t feel like a building site any more. Carpets, column casings, painted walls and sanitaryware enlarge spaces originally thought to be too small for toilets or teaching spaces. It’s the most uplifting site visit to date and I feel genuinely proud. Even though we are still some time behind schedule, I’m really looking forward to seeing the final execution of the building. I simply can’t wait to get back to the office to show the old team photographs of our creation.

May 2008 Practical completion was declared today. Just moments later, laboratory equipment, bottles of colourful potions and office furniture (new and recycled) are marched into the building. This is all quickly in place and the opportunity to take those architectural photographs of deserted, pristine rooms has been lost.

Early this morning, the sun splashed through the atrium and poured into the empty labs and offices: the site is a completely different place. The building is real now and it already feels like it has left the hands of the construction teams and passed into the client’s hands.

Still, there are some snagging items still to be cleared up so no rest for me just yet …