From the archive: The Crystal Palace

As London prepares for the Crystal Palace to rise again, we take a look back into our archive at how the project was received first time around

With the news of Boris Johnson’s plan to rebuild the Crystal Palace, we decided to look back in our archives and see how the project was received first time around.

On January 12th 1850, an article was published in Building (then called ‘The Builder’) outlining a new development committee. The Great Exhibition, which would lead to the building of the Crystal Palace, was officially in the planning stage. The writer, in a surprising feat of foreshadowing, wonders why the president of the Institute of Architects wasn’t invited to the committee.

The reported goal was “to make full and diligent inquiry,- into the best mode by which the production of our colonies and of foreign countries may be introduced into our kingdom; as respects the most suitable site for the said exhibition; and also the best mode of determining the nature of the prizes, and of securing the most impartial distributions of them.”

In July, The Great Exhibition was fast approaching, and the committee had yet to find a good design. 245 contributors were turned down, a decision Building would be unable to let slide. As a last-ditch attempt to come up with something, the committee unveiled their own design: a brick building, with an iron dome designed by Isambard Kingdom Brunel. 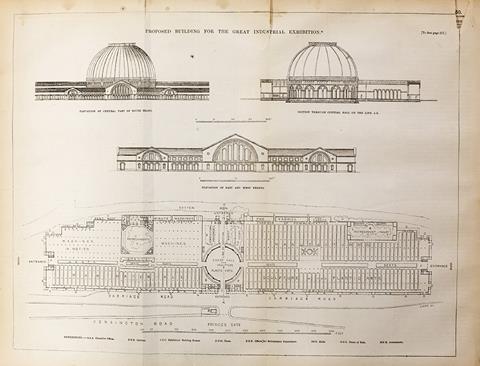 The original design sketch as it appeared in Building

It was ridiculed. A July 6th letter described the dome as “monstrous”, questioned the competence of the committee, and asked why Kennington Common wasn’t chosen over Hyde Park. Instead of anticipation, the mood was relatively muted. The letter notes at one point though that it would look worse if the event was called off: “At least let us be able to say, as the Roi Chevalier, “We have lost all but our honour.””

The final design for Crystal Palace was the brainchild of Sir Joseph Paxton, a gardener from Bedfordshire. At the time, Paxton was enjoying fame for getting the Victoria amazonica water lily to flower in England. Commission member Henry Cole persuaded Paxton to submit his own design. It was a stroke of luck that Paxton had taken interest, and the project needed spades of it. At the time he made his proposal, public confidence in the project was fading.

Paxton’s design couldn’t have fit the bill better. It was cheap, modular, and light. It relied on cast plate glass and iron, and the whole design was based around the size of the glass: each pane was 10 inches by 49 inches, the largest the supplier could make. It was so simple to build that some sections were standing eighteen hours after leaving the factory.

Nonetheless, Building had concerns. “The powerful influence which was exerted in favour of the present design, the great injustice done by its acceptance to the architects and engineers who gave their time and thought to the work in reply for the commissioners’ invitation, and the way in which the arrangement was entered into with the contractors for the execution of it without competition, lead us to view the rising structure with less confidence and less pleasant feelings than we should otherwise have gladly hastened to express.”

The requests for space came in thick and fast. Denmark pledged printers and furniture, the French contributed fine art, and the British Empire occupied half the exhibition with such highlights as the Koh-i-Noor diamond. 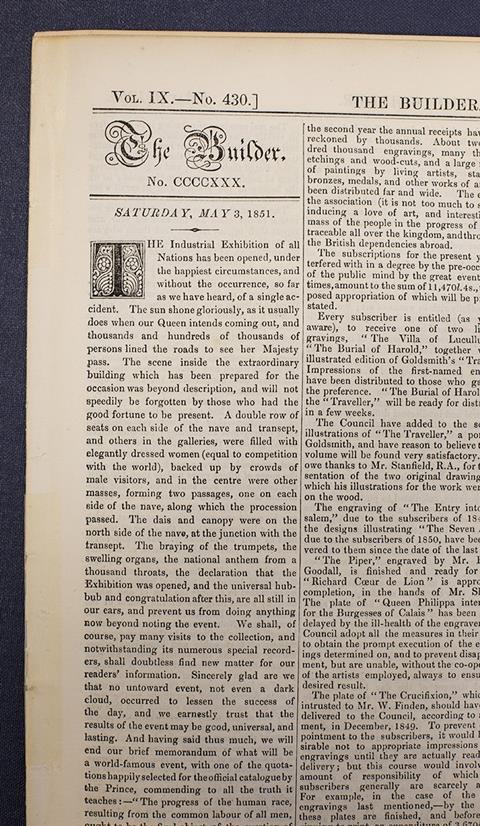 From Building, 1851, describing the opening of the Crystal Palace

By Building’s own account, the event was a success. The front page of May 3rd, 1851, proclaimed it “a world-famous event” and an “extraordinary building”. “Sincerely glad are we that no untoward event, not even a dark cloud, occurred to lessen the success of the day, and we earnestly trust that the results of the event may be good, universal, and lasting.”

All in all, six million people visited the Great Exhibition, equivalent to a third of the UK’s population at the time. The show generated enough money to fund the establishment of the V&A, the Science Museum and the Natural History Museum.

Unfortunately, less can be said for the building’s legacy. It was relocated to Sydenham in a move that cost almost ten times the initial building costs, causing the management company to eventually go bankrupt, and was destroyed in a fire in 1936.

The surrounding park remains today, complete with wildly inaccurate statues of what Victorians thought dinosaurs looked like, and the south London area it formerly occupied is still known as Crystal Palace. It’s been over 160 years since a committee first met to discuss what would become the Crystal Palace, and despite its tragic fate, it still retains its reputation as one of London’s great structures.