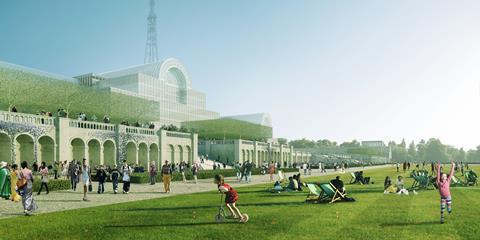 Lavish plans to rebuild London’s Crystal Palace have come to nothing, after Bromley council this week terminated an exclusivity deal with the Chinese developer behind the proposal, ZhongRong.

The exclusivity deal, first signed in October 2013, expired last month, but Bromley council gave the developer until this week to “put up or shut up”, asking it to commit a £5m down payment in order to extend the agreement.

This down payment was not forthcoming, prompting Bromley council to terminate the deal.

ZhongRong had proposed rebuilding the Joseph Paxton-designed giant glass structure, which burned down in a fire in 1936, and incorporating uses including retail and culture.

The council and the developer have been unable to reach a deal over the site after ZhongRong was unwilling to commit to bringing forward plans without first acquiring a 125-year leasehold agreement. The council was unable to sign over the land until the developer had submitted planning for the scheme.

Councillor Stephen Carr, leader of Bromley Council said: “We were prepared to properly listen to what ZhongRong had to say but we were never going to simply say yes to absolutely anything as we need to get this right.

“Now, we will meet with community stakeholders as we have done all the way along this process to review options going forwards. Importantly too, we are continuing to progress plans to improve Crystal Palace Park with an investment in excess of £2m.”