Uphill all the way: Pre-commencement conditions 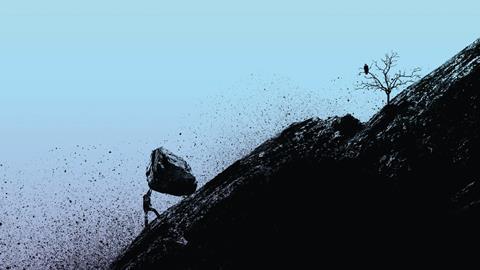 Housebuilders are up in arms about councils’ use of pre-commencement conditions, which they say are holding back schemes that have been granted planning permission

Housebuilders are - they say - in the grip of a paradox that is holding them back from their goal to get more houses built, and quickly. Reforms to the planning system that came into effect a year and a half ago have, as intended, resulted in more housing developments being granted permission more quickly and with greater predictability. And yet housebuilders complain that local authorities are still acting as a break on development. How come?

The blame is being laid on pre-commencement conditions - obligations that councils demand developers fulfil before they are able to start on site, covering everything from environmental strategies to the choice of roof tiles - which housebuilders and their representatives now claim are the biggest obstacle they face in increasing production.

Such conditions have existed for a long time, but housebuilders claim that in recent months councils have started to impose more and more complicated conditions, and that planning departments are obstructively tardy in 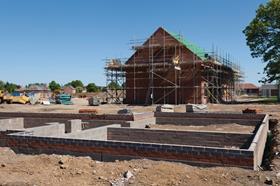 dealing with them. All of which means developers are left in a strange limbo where they have secured planning permission but find themselves unable to build anything.

But is the problem of excessive pre-commencement conditions really getting worse? And if it is blocking growth in housebuilding, what is to be done about it?

Major housebuilders clearly feel frustrated by the way pre-commencement conditions are being imposed. But the issue has been on the radar for some time, and in fact pre-commencement conditions formed a substantial part of the 2008 Killian Pretty review, a report jointly chaired by former Barratt chief executive David Pretty and Essex council chief executive Joanna Killian. The review also made a series of recommendations regarding the conditions (see box overleaf). After the report, the issue has received little attention.

We have sites with more than 80 conditions and sometimes do not see them until the planning committee report. Frequently, too many conditions are imposed

But housebuilders have been very vocal of late. Earlier this month Bellway chief executive Ted Ayres singled out this issue in the commentary that accompanied his firm’s preliminary results, stating that the requirement to discharge numerous pre-commencement conditions is “adding unnecessary delay to the opening of new outlets to meet housing demand”.

And speaking to Building, directors at Linden Homes and Berkeley Group say that pre-commencement conditions are a huge, costly and in many instances time-wasting problem.

“We have sites with more than 80 conditions and sometimes do not see them until the planning committee report,” says Rob Perrins, managing director at Berkeley. “Frequently too many conditions are imposed, which create work for the authority in having to discharge them, cost for the applicant, and delay the delivery of housing that everyone desperately needs.”

The charge is not just that conditions cause delays, it is that the problem is getting worse - and largely negating the improvements made to the planning process through the National Planning Policy Framework. ” People probably aren’t getting to site much quicker as a result,” says Roger Hepher, head of planning and regeneration at Savills. “I expect that if you did a proper analysis you’d find that there has been a small improvement, but it would be small.”

Speaking in September, Stewart Baseley, executive chairman of trade body the Home Builders Federation (HBF) said that he was “increasingly concerned by the conditions attached to many permissions that prevent actual work starting on site”. And last month Steve Morgan told journalists and shareholders that one of Redrow’s current developments ended up having to deal with 109 separate pre-commencement conditions. An equivalent scheme built 20 years earlier, just across the road within the same local authority, had come with just nine conditions attached, he said.

So, is the number of pre-commencement conditions imposed increasing? Finding evidence of this isn’t easy as the data simply isn’t collated at a national level. However, back in 2008, case study research for the Killian Pretty review found that on average, eight pre-commencement conditions were attached to each planning permission, and that there “could be as many as 22”.

In a smaller recent and as-yet unpublished study, the HBF found that the average number of conditions had increased significantly. The study looked at 140 planning permissions for housing developments and found that the average number of pre-commencement conditions this » » year stood at 12.5 and identified instances of permissions coming with as many as 100. Many commentators well-placed to take a longer view also say that they have seen a long-term increase. “The number of conditions on planning permissions has certainly crept up year on year for as long as I can remember,” says planning lawyer Simon Ricketts, a partner at SJ Berwin. “Now on any medium or large scheme there are a whole raft of conditions, many of them pre-commencement and requiring submission of all sorts of strategies and tranches of further detailed information, some of which is unnecessary.”

So, why is the number of pre-commencement conditions increasing? Commentators cite the twin pressures that councils are under: cutbacks in planning departments and the pressure from central government to process planning applications at speed. “Everybody’s under pressure to get through applications quickly,” says Savills’ Hepher, arguing that difficult issues that would have been dealt with at the application stage are now pushed on and end up being dealt with as pre-commencement conditions. “It’s often tempting to say ‘well, there’s an issue here, but let’s not try to deal with it now’,” he says.
Hepher adds: “Local authorities have cut back their resources - there aren’t as many planning officers around to deal with these things - and it isn’t particularly sexy work. My impression is that officers would rather be getting on with the next application than dealing with the tedium of sorting out the conditions on the last one.”

Pretty, on the other hand, doesn’t lay the blame at the door of council planners; rather, he says that the increase is the inevitable upshot of the greater number of stakeholders whose views are sought on all significant applications.

“The increasingly inclusive nature of the planning process compared to 20-30 years ago means that some conditions are being imposed following requests from third parties,” says Pretty, citing numerous national governmental and non-governmental bodies whose views are now sought on a statutory basis. “If they’re statutory consultees then they have a duty to make a recommendation. The more consultees you have on planning applications the more likely you are to get a long list of conditions.”

Hepher adds that the role of the planning system has gradually expanded over the years and is now legally obliged to consider a range of social and environmental issues that simply weren’t within its statutory remit before. “It goes back to this long-term trend of the reach of planning increasing year by year,” he says. “Planning is used as a vehicle to achieve more and more socially desirable objectives.”

So what to do? Stephen Hill, secretary of the development management committee at the Planning Officers Society, acknowledges developers’ frustrations but says that in practice many of his members find that pre-commencement conditions are necessary because much of the detail hasn’t been submitted at application stage. “Applicants are unwilling to risk the cost of providing such information ahead of securing planning permission,” Hill says. He adds that it is already considered best practice for planning officers to ensure that not all conditions need to be met before development begins.

However, some housebuilders are threatening to work outside of the system. “In extreme circumstances, we would have to evaluate the risk and - so long as we weren’t committing any offence - take a decision to carry on building,” says Graham Hutton, group technical director at Linden Homes. “In such situations, we would have to indemnify purchasers, which would add to our costs.”

Hepher says that such strategies certainly happen, but that he always advises clients that they are taking a risk. “Some authorities are hotter on enforcement than others,” he says. “In practice it rather depends on whether any member of the public or local councillor notices what’s happening and makes an issue out of it. If things end up at appeal, planning inspectors are naturally reluctant to require perfectly serviceable buildings to be knocked down. In theory that’s not [the way the system is meant to work], but in practice, given human nature, that tends to be how it works.”

SJ Berwin’s Ricketts agrees that there is a balance of risk to be weighed, but adds: “Any developer who carries out work in breach of condition has to do that with their eyes open because they could be liable for a breach of condition notice. Failure to comply is a criminal offence and they may end up not having a paper trail of approvals that would satisfy an end purchaser or funders.”

Far better than risking criminal prosecution, of course, would be if the system were made to work more efficiently. None of the housebuilders interviewed for this article wanted to see pre-commencement conditions scrapped. Rather they made suggestions remarkably similar to those contained in the 2008 Killian Pretty review: local authorities should think more deeply about which conditions genuinely needed to be met before construction can commence and understand more fully how their requirements impact on a development’s timetable.

And although there is some evidence to show that the burden imposed on housebuilders by pre-commencement conditions is getting worse, Pretty thinks the recent complaints may have more to do with improvements in the housing market than council recalcitrance. “It’s probably something that in the depths of the recession the housebuilders didn’t worry too much about,” he says. “But now that the market is starting to improve, everyone is looking to increase production.” And with an eye on the housebuilders’ and government’s shared goal of increasing the number of new homes, taking a close look at Pretty’s recommendations would seem a good place to start. 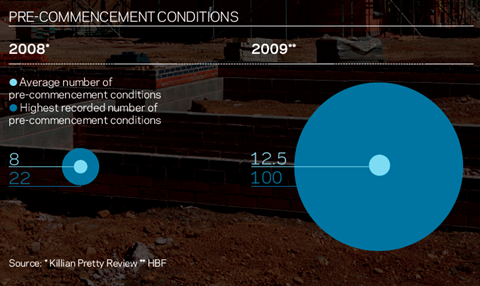 The Killian Pretty review stated that the government should comprehensively improve the approach to planning conditions to ensure that conditions are only imposed if justified, and that the processes for discharging 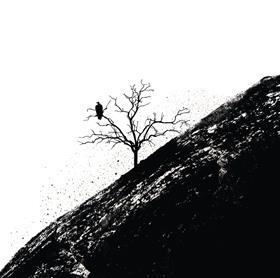 conditions are made clearer and faster by: