In pictures: how Align JV is building the UK’s longest rail bridge, one piece at a time 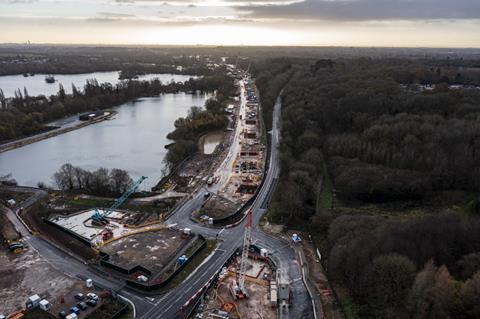 An aerial view of the Colne Valley Viaduct, south portal captured by drone

In a quiet corner of Hertfordshire, just west of the village of West Hyde, two of the UK’s most ambitious and interesting infrastructure projects are starting to take shape.

To the north of HS2’s sprawling C1 south portal construction site, two huge tunnel boring machines (TBMs) are steadily making their way through chalky hills to construct the Chiltern Tunnel. To the south is the planned route of the Colne Valley Viaduct which, when complete, will be the UK’s longest railway bridge. It is being  built by utilising techniques not used in this country for nearly two decades.

When HS2 is finally up and running, the two projects will form the first stretch of the railway outside London. 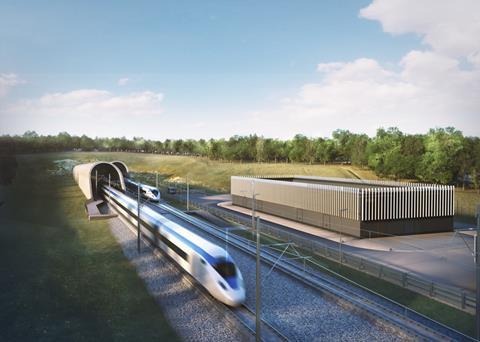 How the south portal of the Chiltern Tunnel will look

Passengers leaving the capital’s tunnels at West Ruislip will find themselves on the viaduct almost immediately, skipping over the River Colne, Grand Union Canal and a succession of lakes for barely a minute before disappearing back into the dark of the Chilterns.

Who is in charge?

Both the tunnel and the viaduct project form part of the C1 section of HS2, which runs for 21.6km from the outskirts of London on its way to the West Midlands, Birmingham and beyond. The C1 package, worth a total £1.6bn, is being overseen by Align, a joint venture composed of Bouyges Travaux Publics, Sir Robert McAlpine and VolkerFitzpatrick.

What makes it unique?

Beyond the sheer scale of the project, the techniques being used to build the Colne Valley Viaduct set it apart from other HS2 bridge projects, as well as most UK infrastructure projects.

Most bridges being built for HS2 are single span and will be lifted into position by crane. The size of the Colne Valley Viaduct – and the fact that it traverses lakes – renders such a method impossible, however. 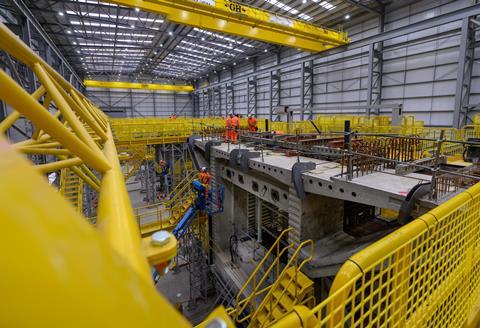 Instead, around 1,000 deck segments will be pre-cast at a temporary factory on site before being dropped into place atop concrete piers by a colossal launching gantry.

Every single segment is unique, with the width – 13.4m – the only dimension that never varies. The first to be manufactured were the tallest vertically and shortest laterally, with the most extreme case measuring 6.7m tall and 2m long.

Due to their individual proportions, the segments are being built using a system called match-casting, in which each segment is poured against the previous one to ensure the whole arch fits perfectly when it is reassembled on site.

There are three casting sets in the factory, which will manufacture 12 segments every week at peak operation. 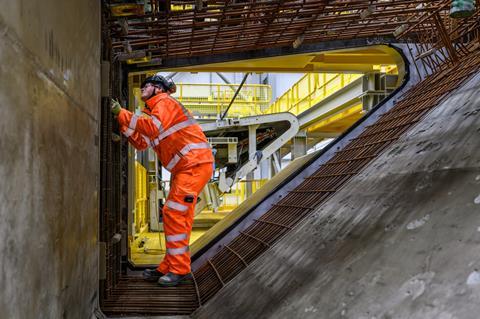 Currently, it is achieving an output of roughly five a week, with 11 segments having so far been built at the time of Building’s visit last month.

These huge deck segments – weighing up to 140 tonnes – are being constructed in a temporary on-site factory, which is larger than the Royal Albert Hall and which has been in operation since the beginning of the year. Once cast, huge, cacophonous vibration machines remove the concrete segments from their cast like jelly tapped from a mould.

According to Ludovic Vergne, manager of the segment factory, such pre-casting techniques have only been used once before in the UK on the Prince of Wales Bridge on the M4, way back in 1993. 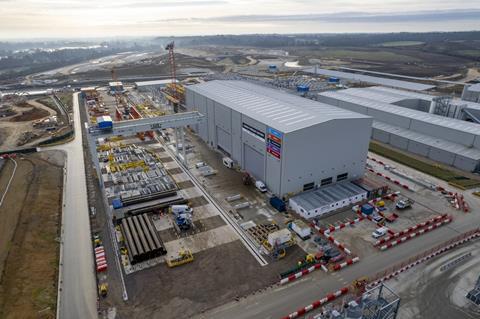 Prior to working on the HS2 job, Vergne had been working with the same enormous launching girder on the construction of a viaduct between Hong Kong and Macau – the longest sea crossing in the world.

The Potain MD560 crane which moves the segments around the worksite has the biggest lifting capacity in the UK, according to Vergne. While it had long been available in catalogues, this is the first time that it has ever been built and put to use.

What about the environmental impact?

The huge twin infrastructure projects have raised some concerns regarding the environmental impact on the local area. The risk of chalk dust leaking into underground aquifers during tunnelling works had caused “real nervousness” on the part of the Environment Agency and local water supplier Affinity Water, according to HS2 senior project manager Mark Clapp.

Chalk dust is not a health risk but can clog pumps at pumping stations, and Clapp later said “a lot of science” had gone into preventing water supplies being impacted by leaks.

Both organisations ultimately signed off on the works after HS2 agreed to invest £100m in additional capacity for local treatment plants to maintain the quality of local supplies. 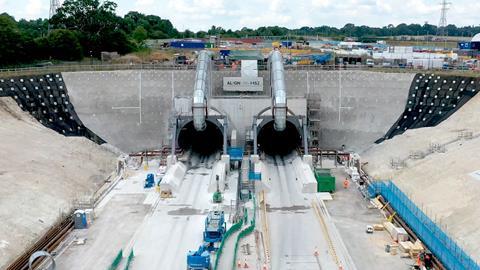 The south portal tunnel openings, with both Cecilia and Florence TBMs inside

The West Hyde worksite was also subject to an attempted blockade by Extinction Rebellion protestors in October 2020, who criticised HS2’s carbon footprint and alleged negative impact on biodiversity. However, HS2 claims that the projects in the C1 portion of the rail route will result in a net gain in biodiversity.

Once construction in the area is complete, the temporary factory and worksite will be removed and the stretch of land between the viaduct and the tunnel will be transformed into a chalk grassland and woodland. 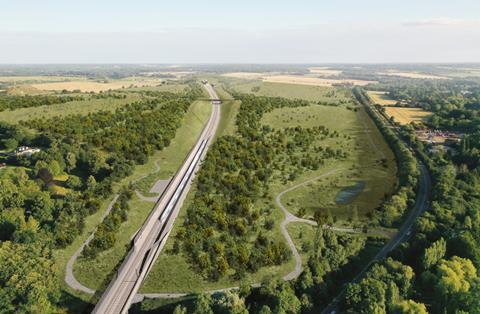 They claim that almost 65,000 trees and shrubs of 32 species will be planted and approximately 3 million cubic metres of chalk spill from the tunnels will be used for landscaping and to create a roughly 90ha chalk grassland.

Such grasslands are a declining habitat in the UK and sustain a variety of small grasses, wildflowers, butterflies and rare orchids.

When will it be completed?

The two TBMs – named Florence and Cecilia – hit their first major milestone last month, reaching the tunnel’s first ventilation shaft, 3km into their drive. The 78m-deep shaft at Chalfont St Peter is the first of five along the route, each dug in time to meet the TBMs. Excavation for the last of the shafts recently began.

Florence and Cecilia are expected to break out at the north portal in roughly two and a half years’ time, by when they will both have drilled 16km.

Meanwhile, the launching gantry for the Colne Valley Viaduct was put into place over the course of three days from March 10 to March 12. The viaduct will be built from north to south and foundations have so far been laid for 45% of the piles. 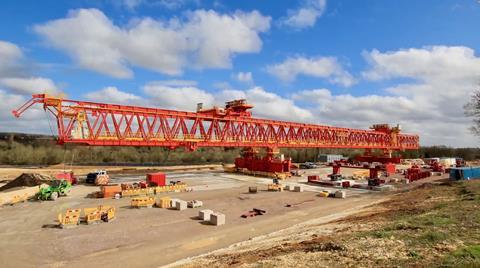 The first segments are expected to be installed in late April or early May and the whole structure should be complete by the end of 2024, after which rail infrastructure and signalling will be installed.

Of course, however, this is only part of a long and complex story and, with many other projects to be completed along the route, HS2 anticipates that phase one – the section that runs from London to Birmingham – will open some time between 2029 and 2033.