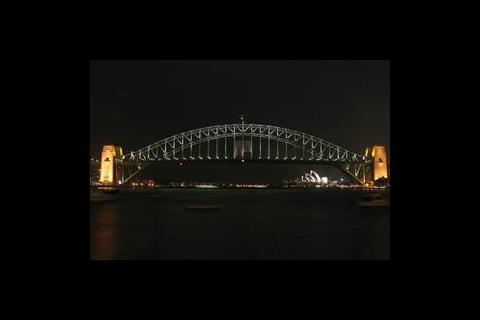 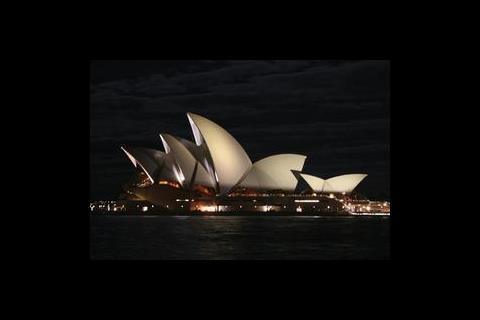 Before and after: the new lighting enhances the shells, making the original scheme (poctured) look dull by comparison 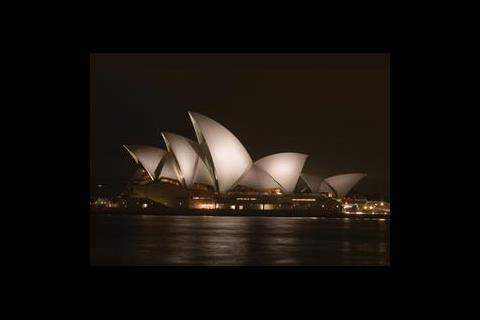 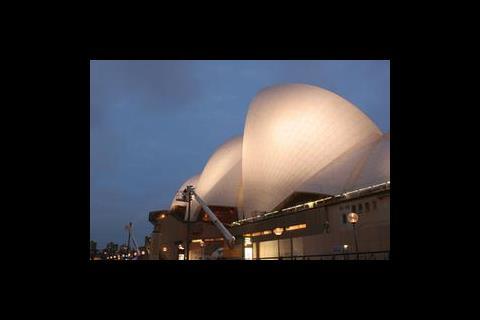 Spreading the light: Steensen Varming’s team focuses lamps on the lighting poles and mount luminaires on a scissor lift to test the computer model 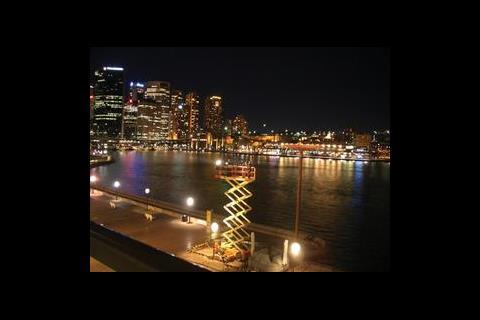 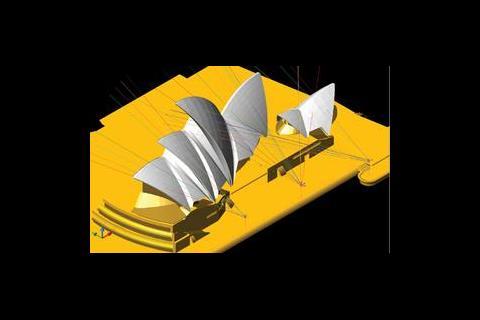 Point and shoot: a CAD study used to determine the aim of the luminaires 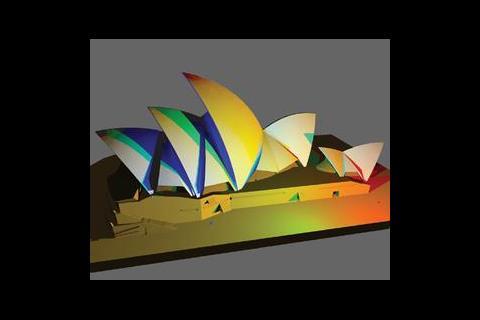 Colour scheme: a CAD similation of the three-pole lighing option 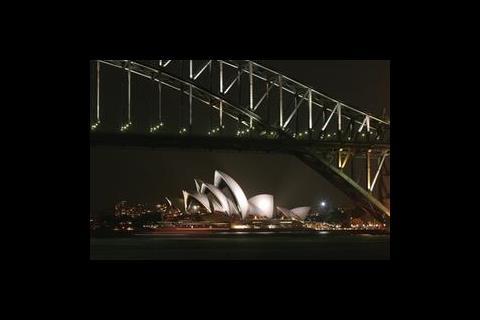 National icon: the finished scheme, with Sydney Harbour Bridge in the foreground

It took just six months to transform the night-time view of Sydney’s Opera House from a lacklustre affair into a vista worthy of this iconic building. Here’s how it was done

It is one of the most iconic buildings in the world. With its spectacular harbourside location, Sydney Opera House is a symbol not only of Sydney, but of Australia. The building’s prominent location guarantees it is the subject of practically every photograph of Sydney harbour.

But it was a different story at night. Over the past 30-40 years, an increase in the overall night-time light levels left the Opera House struggling to stand out from other buildings in the vicinity. Until recently, that is.

Rather than simply applying a bulk increase in overall illumination, the Sydney Opera House Trust was keen to pursue a more appropriate and enhanced lighting solution for the western “shells” of the building’s roof. It wanted a solution in keeping with designer Jørn Utzon’s original intention – to use lighting to enhance the building’s night-time form and features. It was a task made all the more challenging by its prominence from all angles.

The building services engineer who took on this lighting challenge was Steensen Varming’s Sydney office. The firm was familiar with the building, having been a member of the original design team. And they were already involved with the “Venue Improvement Programme” – a suite of projects overseen by Utzon Architects (represented by Jørn’s son, Jan) and Johnson Pilton Walker to remodel the building’s interior according to Jørn Utzon’s original vision.

As if lighting an international icon was not difficult enough in itself, the Sydney Opera House Trust (the body responsible for looking after the building on behalf of the Government of New South Wales) had set out an extremely tight development programme. The consultants were allowed just six weeks to develop a working concept and less than six months to complete the final installation.

Their first task was to come up with a concept. When architect Jørn Utzon first conceived the Opera House, he wanted it to look from a distance like a series of delicate shells floating above the hulking podium. Before being forced to resign from the project in 1966 by a change of government, he set out a series of design principles broadly addressing how it should be lit. Jack Waldram, a renowned lighting designer at the time, worked in conjunction with Australian architects who replaced Utzon and the specifically established “GEC/Philips Opera House Lighting Company” to deliver the lighting installation.

In 1988, a floodlighting design by Julius Poole and Gibson was implemented as part of the Australian bicentennial celebrations. This comprised a number of 1000 W CSI floodlights mounted on two 12.5 m poles (one south-east, one south-west of the building), incorporating large louvres to prevent glare. This solution was flat, didn’t cover the entire building, and created unacceptable shadows across the shell bases.

Steensen Varming quickly explored proposals for a two, three and four-pole lighting solution that would comply with Utzon’s design criteria. The building’s unique geometry meant that 3D modelling and visualisation was an absolute necessity. Omnidirectional colour-coded sources were used to ascertain sightlines and indicate the extent of coverage from various proposed locations (see picture, page 42). As a result of this, Steenson Varming and the architects agreed to pursue a three-pole solution, with the podium as a limiting height to minimise their impact on daytime views.

It should be noted that, in some regards, this was a necessary compromise. The modelling process clearly showed that lighting to the uppermost reaches of the northern shells could not be achieved unless the northern pole was extended at least 4.5 m above podium level. The design team unanimously agreed that failure to achieve full coverage of the northernmost shells would be preferable to extending the northern pole to a height where it would have a significantly detrimental effect on the daytime vista.

There was a general preference for the use of many smaller light sources over fewer large ones as this would increase flexibility and adaptability of the installation, minimise glare and the visual impact of individual luminaires and allow better control of “spill” light. It also meant that any lamp failure or misalignment would have a minimal effect on the overall impact.

The CAD visualisation process was taken to the next step in order to develop a scheme based on 150 W ceramic base metal halide sources. These lamps were chosen as they provide good colour rendering and consistency throughout (a satisfactorily long) life – a crucial attribute for this project and one the existing installation did not adequately address. The aim was to provide a 10:1 contrast ratio to ensure the visual impact of the sculptural form could be fully appreciated. Based on these visualisations and an indicative photomontage of the daytime appearance of the poles and fittings, the Opera House Trust and the architect gave their approval to proceed with a full scale test.

This test was considered necessary to compare the performance of several luminaires, each with similar technical attributes. The tests were timed to coincide with a visit by Jan Utzon and a meeting of the Sydney Opera House Trust Building Committee, to gain their endorsement prior to final design and installation.

First, a large 10 m x 10 m white fabric test sheet (sewn together by Steensen Varming partner Dan Mackenzie’s wife) was hung from the Tarpeian Cliff, near the Opera House forecourt. Luminaires were directed on to this and measurements of uniformity of beam distribution and perceived and measured brightness were taken.

The fittings were then mounted on scissor lifts and trained on the building according to the results of the computer models. The luminaries’ aim was then finetuned on the instructions of observers stationed on the opposite side of Circular Quay, approximately 500 m away. Various lenses and optical attachments were tested and the results for each fitting included on a weighted selection criteria matrix.

The tests proved to the engineers that the solution worked well. But would the influential Opera House Building Committee, Jan Utzon and Richard Johnson be impressed? The following night, Steensen Varming anxiously unveiled the scheme. It was immediately clear that the lighting brought out individual tile detail, eliminated many undesirable shadows and significantly improved the colour and general modelling of the shells. The scale and presence of the Opera House at night was said to have been greatly enhanced and to everyone’s relief, it was unanimously and resoundingly approved. The Sydney Opera House’s heritage architect also fully endorsed the scheme as meeting the requirements of the Conservation Management Plan.

The trials showed that WE-EF’s ETC-141 narrow beam floodlight, fitted with a Phillips 150 W CDM-T lamp in 4200 K was the preferred luminaire/lamp combination for the task.

Architects Jan and Jørn Utzon worked with Johnson Pilton Walker to design an elegant tapered pole with a bronze paint finish, to support the luminaires. The pole contains a large compartment, close to the base, to house the control gear, with the “ignitors” housed in the mounting spigots of the luminaries. Security surveillance equipment was also integrated into the pole in dummy luminaire housings. Robust, traditional iron core control gear was used to deal with the harsh, harbour-front environment.

The existing lighting pole was demolished and the new poles installed over three days, connected to power and C-Bus control systems. The posts were levelled with the assistance of a surveyor to ensure no misalignment.

Next followed a very tight programme of testing over three nights to aim and commission the installation as outlined below.

Night One. Rough aiming was undertaken, using the recorded aiming points and luminance/brightness test records taken during the concept test, followed by finetuning from a number of different viewing angles. Accessories were also installed, including spread lenses, anti-glare baffles and external glare visors (which are quaintly called sugar scoop snoots).

Night Two. The priority was to ensure the shells were lit down to podium level, then to model the roof shell curvature. Reduction of glare to the external podium, while important, was deemed a less critical consideration. Night two also saw the meticulous task of fabricating templates and testing custom external glare shields: critical to ensuring compliance with Utzon’s sanction to minimise glare in the foyers.

Night Three: This night saw final aiming of the luminaires, with all accessories in place. As final fabrication of custom glare shields (based on models produced during a period of “cardboard aided design” the night before) would take some time, standard glare-shields, with ingenious quick-fix enhancements, were installed as an interim measure. Also, to reduce the risk of inappropriate adjustment or repositioning in the future, aiming angles were marked permanently on the fitting mountings.

Night Four. The architects reviewed the installation from the podium, a water taxi and a number of vantage points around Circular Quay. The team swapped priority glare shielding for effect, after deciding that some of the drama of the design had been lost in pursuit of total glare reduction the night before. Finally, there were some adjustments made to the aiming before the scheme was approved.

Further enhancements will take place over coming months, including installation of the custom made external glare shields and several uplights in the ground adjacent to the shell pedestals and the installation .

This work forms an initial part of the framework of a Lighting Masterplan for the Opera House, which will complement and rationalise existing documents including the Strategic Building Plan, the Conservation Management Plan and the Utzon Design Principles.

In spite of this lack of absolute finalisation, the installation has been endorsed by the Sydney Opera House, with the CEO quoted as saying he is delighted with the outcome, and the head of the Building Development Group sending congratulations for delivering a triumphant project. The scheme was completed ahead of schedule and under budget.

The new installation has reinforced the true majesty of the building in Sydney’s night-time environment. As a result, Steensen Varming has been engaged to carry out the design of the eastern shell lighting – an even more significant vista as it is framed by the Sydney Harbour Bridge. It will also pose some interesting challenges since the lighting solution may need to be based, at least partially, in the harbour. Sydney-siders are no doubt looking forward to seeing the next stage. n

Thanks to Dan Mackenzie, Steve Wright and Michael Fearnley for their assistance in preparing this article.

Utzon’s Design Principles for the lighting of Sydney Opera House