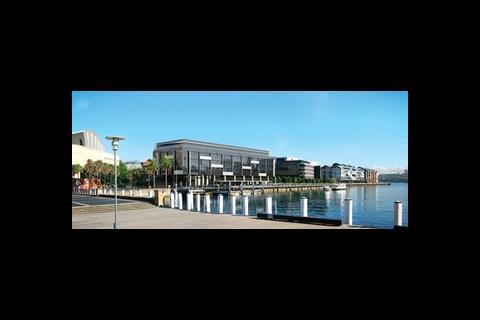 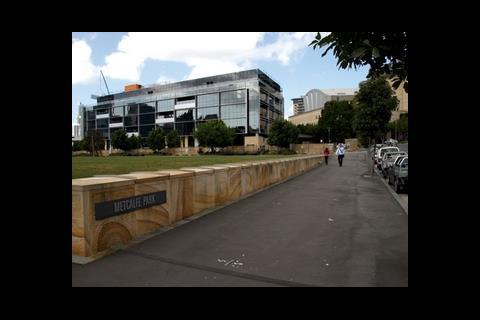 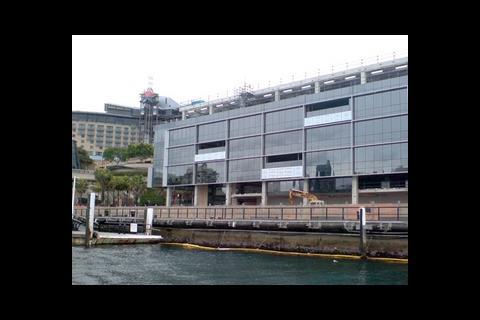 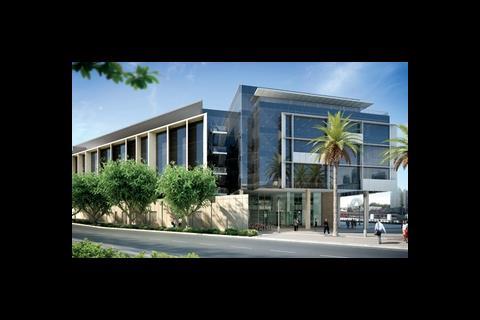 The Darling Island masterplan for Sydney Harbour has thrown up a new contender for the title of Australia’s greenest building.

Hot on the heels of Melbourne’s Council House 2 (BSj April 08) comes Sydney’s Workplace6, a rival not only in the silly title stakes but in its ultra-low energy credentials. CH2 was the first building to gain six stars under the Green Building Council of Australia’s (GBCA) eco-design rating scheme. It bristles with innovative green technologies, including a co-generation plant, absorption chiller and sewer mining technologies.

However, whereas CH2 was a purpose-designed green showcase for Melbourne city council, Workplace 6 is a speculative commercial development designed without a particular tenant in mind. Like CH2, it features co-generation, absorption chilling and sewer mining, but Workplace6 has also been able to take advantage of a prime waterfront location by using Sydney Harbour as part of its green cooling system.

This is particularly appropriate given that the £24 million (Aus$53 million) building forms part of the third stage of the Darling Island masterplan, developed under the control of the Sydney Harbour Foreshore Authority (SHFA). The authority was looking for a five-star rated building, but development partners GPT/Citta decided to go one better.

“The ability of the team to demonstrate how a six-star rating would be achieved while maintaining superior returns was central to their success in securing the project,” says Scott Brown, director of sustainability at Waterman’s in Sydney, which acted as building services and sustainability consultant for the project.

The hunt for more stars

Brown says everyone embraced the six-star commitment. “All team members studied the GBCA course, took the exam and are now certified as GBCA professionals.” The developers are also aiming for the building to become the first in New South Wales to achieve five stars under Australia’s NABERS Energy rating system (see box below for an explanation of Australia’s green rating schemes).

On site, the building is nearing completion; its restrained glazed facade design gives no hint of its ultra-green credentials. Workplace6 sports none of the green accessories flaunted by its brasher predecessor in Melbourne, such as vertical wind turbines and shower towers. It provides five floors of premium office space with views towards Sydney Harbour Bridge. The offices are set above retail outlets, which are not included in the six-star accreditation.

The building also has a basement car park and plantroom, and it is the latter that holds the key to the building’s sustainability achievement – a 600kVA tri-generation plant. This uses a gas-powered generator to meet a big proportion of the landlord’s electricity demand during the building’s normal operation. Brown says: “In most other commercial buildings where co-generation has been used, it has only been on a small scale to meet a fraction of the building’s electrical demand, whereas at Workplace 6 the system will meet over 25% of the peak base building power requirements.” And just to reinforce the green message, the landlord will supply 25% of the remaining requirements from a green electricity tariff.

Out of hours, electrical loads will switch over to the mains supply to stop the generator being run inefficiently. Should things go badly wrong, a diesel generator provides back-up to the tri-generation system.

Waste heat from the generator cooling system and the exhaust flue will be used to drive an absorption chiller. The unit uses hot water in a lithium bromide solution as the refrigerant. It has a relatively small water pump instead of a large electric compressor to provide chilled water, so only a fraction of the electric power is consumed compared with an electric-powered chiller. “This is by far the most significant ecologically sustainable design feature,” says Brown. According to him the unit will provide about 400kW of cooling to meet roughly a third of the building’s cooling load without the need to run the two electric centrifugal chillers. In winter, when cooling loads are less, the generator’s hot water supply can be used for space heating in place of a gas-fired boiler.

The absorption chiller and the two electric chillers feed a common system header to serve the building’s five air-handling units and the office chilled beam system via a plate heat exchanger.

On the chillers’ condenser water heat-rejection circuit, another green innovation occurs: three titanium plate heat exchangers transfer the building’s waste heat into Sydney harbour, leaving the roof free of the usual clutter of cooling towers. The water re-enters the harbour about two degrees warmer. “In a standard building you use cooling towers to reject heat from the air-conditioning system. Instead, we’re using a harbour water heat exchange – it’s not a unique solution in Sydney as there are at least half a dozen buildings that do it,” Brown says.

One of the key reasons for using of the system, which is three times the price of a conventional cooling tower solution, is that planning restrictions ruled out plant on the roof. That said, Brown points out that it makes a big contribution to the sustainability agenda. “There are a couple of reasons why using harbour water for heat rejection is a good choice for a green building: one is that if you don’t have cooling towers you don’t have to worry about Legionella, in particular the need to prevent its formation through the use of chemicals; the other is that we’re saving 8 million litres a year of water that would otherwise have evaporated from the cooling towers,” he says. This is an important saving in a country where water is becoming an increasingly precious commodity.

Brown says pump energy used will be a little higher than for the cooling tower option because the harbour water is passed through a filter and also because of the pressure drop from the plate heat exchangers. He argues that this is mostly offset by being able to use lower condenser water temperatures with a greater temperature differential, which will increase chiller efficiency. The solution also saved space. “We’ve got a plantroom in the basement containing the pumps and the heat exchangers that is smaller than the space needed for cooling tower plant, which increased the lettable area,” he says.

The facades are not only designed to take advantage of the views but to maximise the amount of daylight entering each of the 3500m2 floor plates. “The building’s orientation and envelope were fixed by the SHFA, but Waterman did have a considerable input into the facade/glazing system,” Brown says. The addition of a central atrium admits daylight into the building’s core and means that no point of is more than 12m from an external window.

High visible light transmittance glazing and daylight sensors reduce the need for artificial lighting at the perimeter and keep cooling requirements to a minimum.

Offices are protected by external shading, but Brown says that without air-conditioning the outdoor temperature, humidity and solar gains in summer “would create an indoor space that could not be kept within the comfort limits for high quality offices”. The five floors of offices will be kept cool using a combination of passive and active chilled beams. Passive units serve the central zone while the active units will help deal with the additional solar loads near the windows.

The perimeter units are zoned by facade orientation. There is also provision for internal blinds to be installed should they prove necessary. Room temperature is controlled by modulating the chilled water flow to the passive chilled beams. The fresh air supplied through the perimeter chilled beams is supplemented in the office central core areas through floor-mounted swirl-type diffusers. Carbon dioxide sensors ensure the fresh air supply matches occupancy demand.

Another unusual feature of the project is its use of the local sewers. Like the harbour heat rejection, this solution also resulted from a planning edict. “Part of our requirement by the Sydney Harbour Foreshore Authority was to recycle water and to provide water to the adjacent parks,” Brown explains.

This turned out to be an onerous obligation. The project team realised early on that collecting rainwater from the roof would not be enough to meet this requirement, so they had to resort to more creative measures. A “blackwater” plant was proposed to take sewage from the building and treat it for use in toilet flushing and irrigation. However, this still left a shortfall in the water required, so the team has tapped into the sewer main in the street outside – a process called sewer mining.

Sewer mining is a relatively new technology. “We chose to go with proven engineering technology known as membrane bioreactor (MBR), which is arguably the most robust solution on the market,” says Brown. After the processing plant, there is a clean water holding tank from which water is pumped to the various uses. The concentrated sewer waste, known as waste activated sludge, is fed back into the street sewer – assuming the local water authority gives its approval. If not, the waste will be trucked off site as required.

This strategy will supply 8000 litres of clean water to the building each day for toilet flushing and another 32,000 litres for the irrigation of two local parks – a service claimed to reduce the council’s reliance on drinking water by 11.5 million litres a year. As a result, water use is predicted to be reduced by 85% compared with a standard office building.

The 20,000m2 building is due for handover next month. Inside, the sustainability mission continues with the fit-out and the use of low VOC finishes for the carpets, paints, adhesives and sealants in preparation for the first tenants: Google, which is taking the top three floors, and Accenture, which will be on the first and second floors.

Brown says Waterman’s would like to be involved in the building post-occupancy, although this has not yet been negotiated. Workplace6 is predicted to save up to 75% in CO2 emissions compared with a standard office. It will be interesting to see if it delivers.