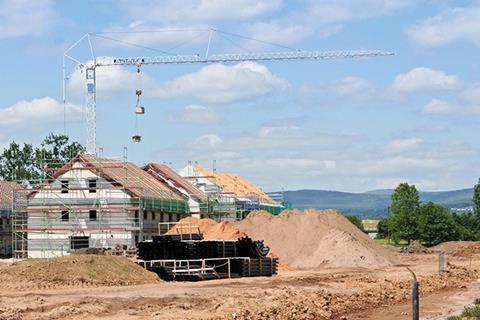 The latest GDP figures for the UK economy were released in the last month and they showed growth of 0.6% in the second quarter of 2016.

This was above the 0.4% rate of growth experienced in the first quarter and is an indication that the economy grew strongly despite the uncertainty surrounding the EU referendum. It is important to note that this release contained data for only one week of post “Brexit” activity so any inference relating to its impact is not appropriate.

Despite the strong Q2 data, the aftermath of the Brexit vote has led to Markit’s all-sector PMI to fall to its lowest level since April 2009. Seen as a reliable leading indicator of future economic performance, the PMI reading in July was 47.3, down from 51.9 in June, the biggest one-month fall in the history of the survey.

Additionally, it showed that each sector of the economy had dropped below the 50 mark, which indicates a decline in activity, though it is worth noting that construction levelled off in July after a large fall in June.

The latest figures from the ONS indicate the construction sector in the UK declined by 0.7% between Q1 2015 and Q2 2016.

Comparing Q2 output levels with the same period in 2015 showed a decrease of 1.4%.

The main reason for the quarterly fall in output are decreases in new infrastructure. This sector fell by 3.7% compared with Q1 2016, the third consecutive quarter of decline. Private housing decreased by 0.2% over the same period. One positive note was the industrial figures, which increased output by 7.3% (see table, right).

The CPA/Barbour ABI Index, which measures the level of contracts awarded (using January 2010 as its base month), recorded a reading of 139 for July (see graph, right). This is a sharp drop from the previous month and suggests that activity in the industry is slowing. The readings for private housing decreased significantly from a reading of 226, down from 264 the previous month. Other sectors such as commercial offices and industrial factories increased but the housing readings will be a concern for future activity in the industry should this pattern continue.

According to Barbour ABI data on all contract activity, July witnessed a drop in construction levels with the value of new contracts awarded at £5.8bn, based on a three-month rolling average. This is a 6.4% decrease from June and is 9.5% lower than the value recorded in July 2015. The number of construction projects within the UK in July decreased by 3.7% on June, and was 6.9% lower than July 2015.

The majority of the contracts awarded in July by value were in London, accounting for 21% of the UK total. This is followed by the West Midlands and the South-east with 14% and 13% respectively (see pie chart, right). The main reason for London’s figures this month was the award to construct the upgrade to the baggage screening system at Heathrow airport. This contract is valued at £170m and was awarded to Balfour Beatty. In the West Midlands, the largest contract awarded in July was the office development Paradise Circus in Chamberlain Square, Birmingham. This contract has a value of £250m and is an eight-storey office scheme set to provide around 14,000m2 of floorspace. The highest value contract awarded in the South-east in July was the £45m Oak Park health and wellbeing campus in Hampshire, which will provide a selection of assisted living residences and was due to start this month.

Residential had the highest proportion of contracts awarded by value in July with 32% of the total. The Harbour Central project in Poplar, east London, was the largest project awarded in July. This is set to provide 990 residential units at a value of £50m and contributes to the sector’s performance.

Another large contract awarded in July was the Dudley House redevelopment in London’s Paddington, which is valued at £50m, due to start this November and proposed to deliver 200 units. 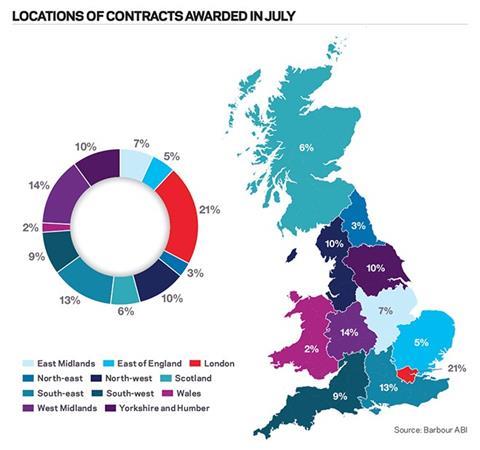 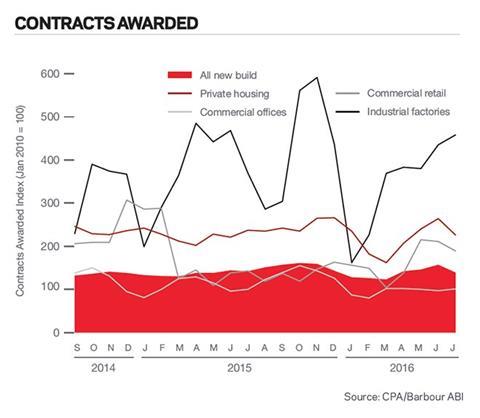 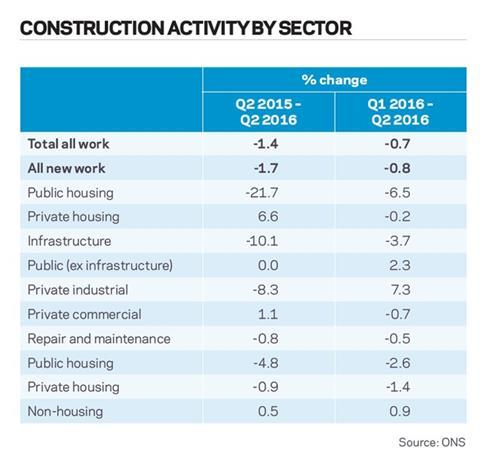 The number of residential units that reached contract award declined significantly in July, though levels are still higher than last year.

The performance of the residential sector was subdued in July with the total value of projects awarded valued at £1.7bn based on a three-month rolling average. This is a 6.9% decrease compared with June, although this is 21.1% higher than July 2015. The number of units associated with residential contracts awarded decreased by 15% between June and July based on a three month rolling average, but are 13.4% higher than July 2015. The monthly drops in residential values and units suggest some slowdown in recent months but how much of this is attributable to the Brexit vote remains to be seen. Subsequent months’ data will be more revealing as to the extent of the Brexit effect.

The latest house price indices for July from mortgage lender Nationwide showed that average house prices are rising at 5.2% annually, an increase from 5.1% in June. This is little change and it is expected that the relative strength of the labour market should continue to underpin these levels of increases. The Halifax reported annual house price rises at 8.4% in July, no change from June.

It is too early to assess the impact of the referendum decision in these figures; however, there was a slight decline in the number of mortgage approvals to the lowest level since May 2015. 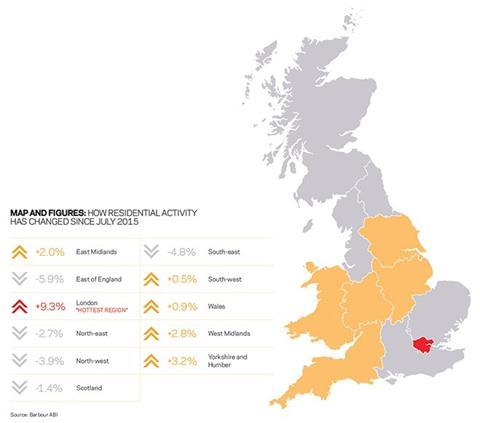 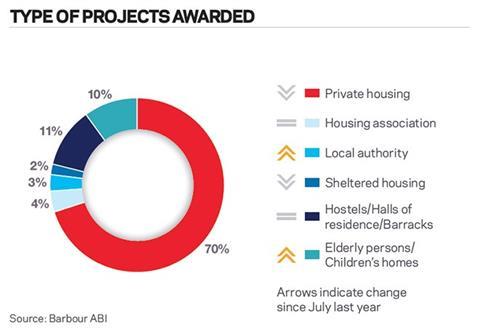 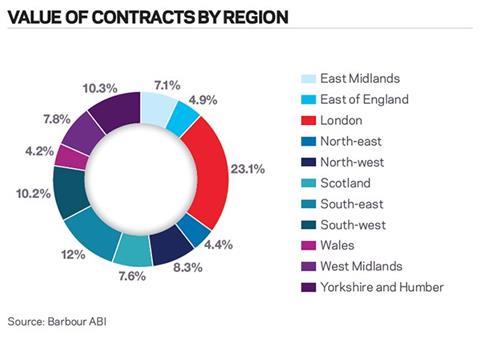 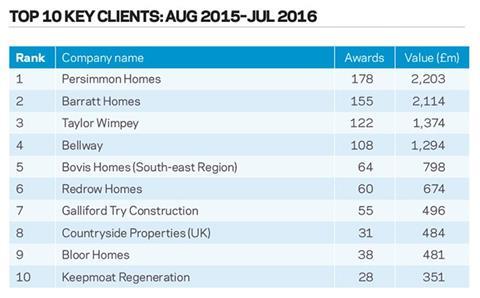 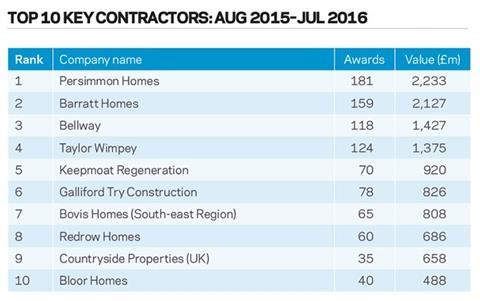