Market review: Rough with the smooth

This was below the 0.7% rate of growth experienced in the second quarter of 2015 and is an indication that the economy lost some momentum over the summer months. While the total level of output is now comfortably above its prerecession peak, the pattern of growth within the economy is still very much focused towards the dominant service sector.

The labour market continues to perform particularly strongly in the UK, however, with further impairments in the period July to September.

A number of high value residential contracts were awarded in October, which signified a return to higher levels of activity in the sector after the post election lull.

The latest figures from the ONS show that the construction sector decreased by 2.2% between July Q2 and Q3 2015. Comparing output levels with Q3 last year showed a decrease of 0.1%.

Every individual sector apart from infrastructure and private industrial experienced quarter-on-quarter falls, with public housing decreasing by 12.7%. This was also significantly down by 23.3% on the same quarter last year. Private housing was slightly down (2.6%) on the previous quarter but is still 1% higher than Q3 2015.

The CPA/Barbour ABI Index, which measures the level of contracts awarded using January 2010 as its base month, recorded a reading of 161 for October. This is an increase from the previous month and continues to support the view that overall activity in the industry remains strong despite the official statistics showing a slowdown.

The readings for private housing remain high at 235. Commercial offices activity also notably increased in October, recording a figure of 155, up from 139 in September.

The construction sector
According to Barbour ABI data on all contract activity, October witnessed an increase in construction activity levels with the value of new contracts awarded £7.4bn, based on a three-month rolling average. This is a 5.3% increase from September and a 24% increase on the value recorded in October 2014. The number of construction projects within the UK in October increased by 14.6% on September, and were 13.9% higher than October 2014.

Projects by region
The majority of the contracts awarded in October by value were in London, accounting for 17% of the UK total. This is followed by Scotland with 15% of contract value. In London, the major commercial office project at the Olympic Park, known as the International Quarter, was awarded in October with a value of £150m. The proposals are for a 20-storey office building with retail providing over 60,000m2 of office space.

There was also a large residential project awarded in October for the City North Development at Finsbury Park, a 350-unit scheme with a value of £120m. In Scotland there were two large projects of note in October. The first was the Aberdeen to Inverness train line improvement, which was awarded to BAM Nuttall and has a project value of £170m. The other was a renewable energy project, a feature of the Scottish construction market in 2015, called the Bhlaraidh wind farm in the Highlands, which has a project value of £170m. 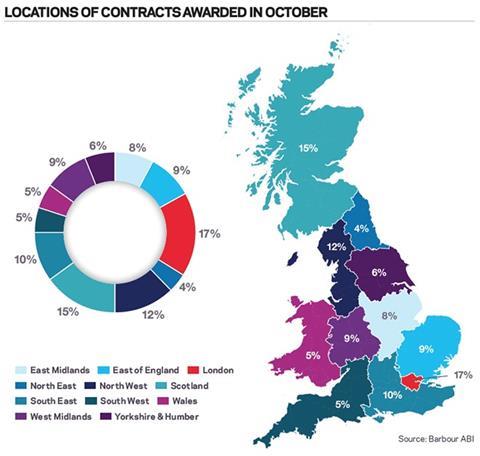 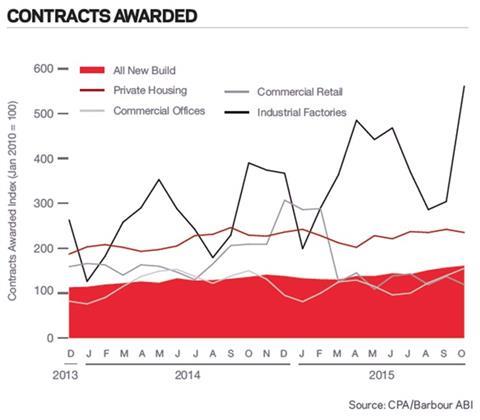 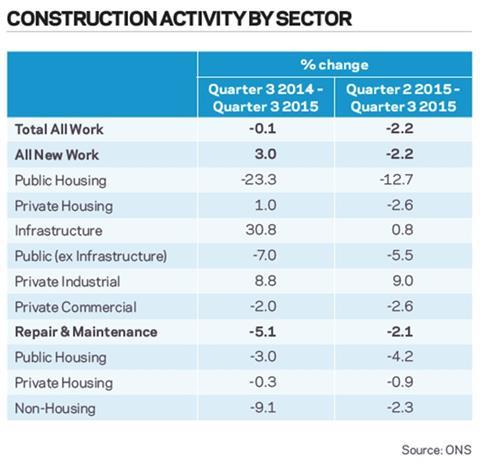 Spotlight on residential
Activity in the residential sector increased in October with the total number of units awarded at 11,568, based on a three-month rolling average. This is a 2.8% increase compared with September but is 14.7% lower than October 2014.

However, the value of projects associated with residential contracts awarded increased by 41.6% between September and October based on a three-month rolling average, and is 31.3% higher than October 2014.

These statistics suggest an increase in the number of high value schemes rather than high density ones. Given that the long-term fundamentals that have been driving growth, in particular help for first time buyers, the market should remain confident for the long term growth of the sector.

Project by region
London was the main location of activity in the residential sector this month, accounting for 15.5% of the value of contracts awarded, a decrease of 11.8% from the same month last year. However, in a sign that residential activity is increasing its geographical spread, the North-west accounted for 14.6% of contract value – an 8.1% increase from the same month in 2014. 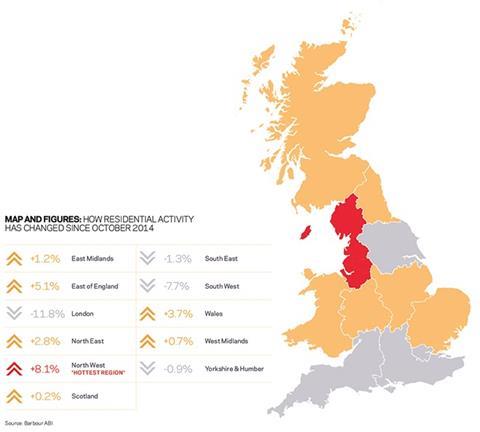 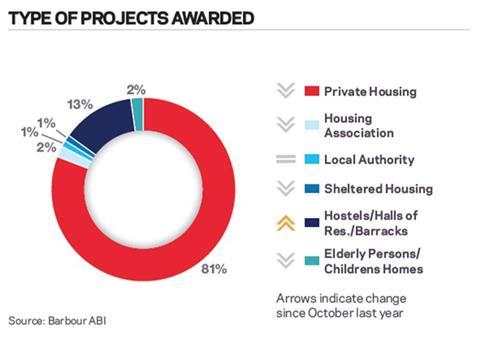 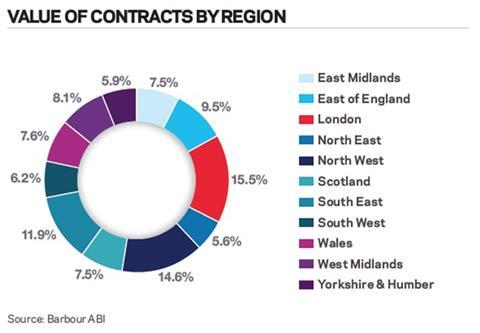 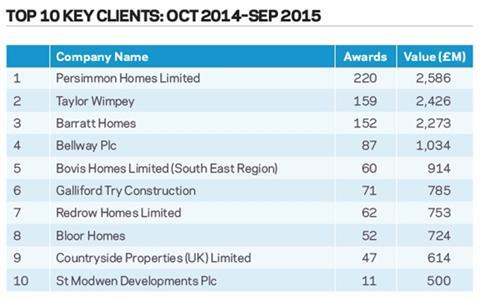 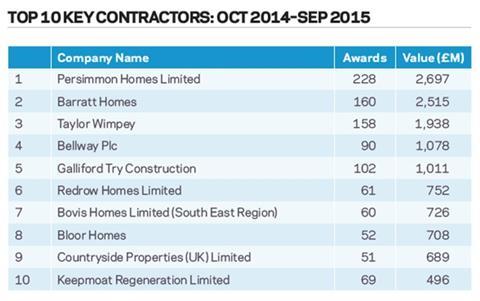