Travel facility north of Durban, on which Turner & Townsend was project manager, will cater for passengers attending 2010 World Cup matches 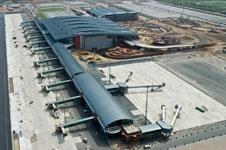 King Shaka International Airport was opened on 1 May, north of Durban, South Africa, in advance of next month’s 2010 World Cup.

Turner & Townsend led the project management, project controls and cost management teams, working as part of a the Illembe Consortium (led by Group Five and Wilson Bayly Holmes-Ovcon) and other joint venture partners. The client was Airports Company of South Africa.

The airport, which is 22 miles north of Durban city centre, has been built in preparation for increasing demand for transport to and from the city during the World Cup and is the first greenfield airport to be built in South Africa for over 20 years.

The passenger terminal has a floor size of 100,000m² and will cater for both domestic and international traffic of up to 7.5 million passengers a year. The unofficial peak estimate for numbers arriving in Durban during the World Cup is 60,000 people a day.

The airport has taken 32 months to build and is said to have been delivered on budget at a final expected cost of around £750m.