75% of supply chain for wind industry ‘should be from UK’ 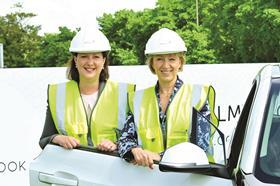 Three-quarters of the supply chain for the £29bn offshore wind industry should come from the UK, according to energy minister Andrea Leadsom.

Speaking to Building this week, Leadsom said the government is committed to boosting the offshore wind power sector and expects to see British contractors benefitting from the investment.

“Also, very importantly, I expect to see a lot of the UK supply chain benefitting from those contracts. The offshore wind industry has its own 50% target [to use UK firms in its supply chain]; I think it should be much closer to 75% personally.”

According to figures compiled exclusively for Building in February by data company Barbour ABI, £29bn of wind farms were planned in the UK that did not yet have contractors appointed, including the world’s largest offshore wind farm, the £15bn Hornsea One off the coast of Yorkshire.

The wind sector is enjoying a surge of investment - the £29bn figure dwarfs the £12.3bn of contracts awarded on wind farm developments over the past five years.

The government announced last November it plans to run three strike price auctions for offshore wind farms by 2020, with the first auction taking place by the end of this year. Funding will only be granted to developers that can meet a strike price of £92.50 per MWh, the same as the Hinkley Point C nuclear power plant.

Leadsom spoke to Building at the launch of the UK’s first and only “eco town” in Bicester, Oxfordshire - conceived under the last Labour government’s eco towns policy.

Four sites were approved under the coalition government, but in April 2011 the communities department announced that only the site in Bicester would be built to the proposed eco town standards.

However, Leadsom insisted the government hasn’t given up on eco towns and said there is still a future for them if the demand is there.

She said: “We haven’t actually scrapped eco towns. All we’ve said is we’re not going to force eco towns on people, so we’re delighted to have eco towns where communities want to have them.”

The first homes in the £800m eco town - which will have 6,000 homes when completed - have already been finished, with 18 residents moving in this month.

Willmott Dixon won a £27m contract to build the first 91 homes as part of the 391-home first phase of the overall development, which will take another 20 years to complete.

Steve Hornblow, project director at the developer A2Dominion, said a contractor for the second phase will be appointed in the next few weeks.