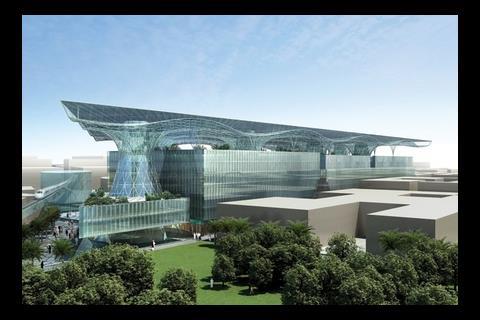 The exterior of the building. 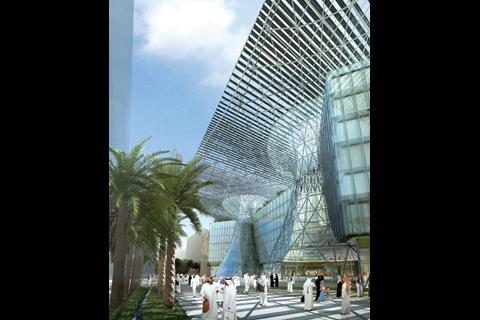 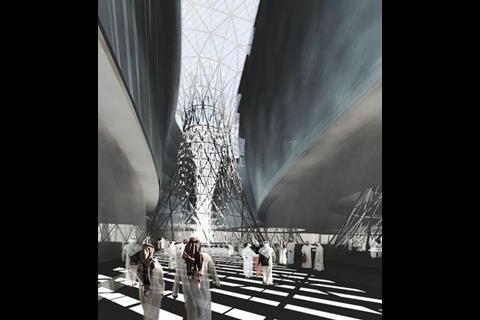 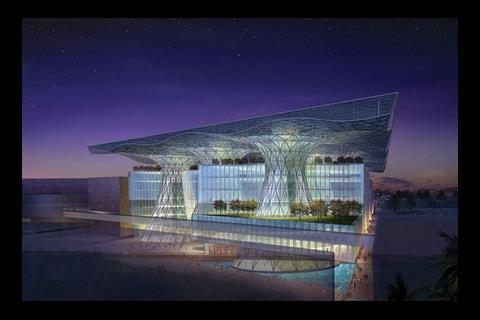 The Masdar HQ building at night 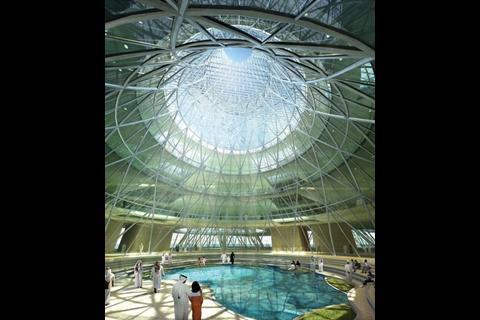 Bold claims made for office and housing scheme by US architect. Building will be first large scale "positive energy" building and lowest energy consumer for modern A office building

Section of the building.

First of a Kind

Gordon Gill, Partner at AS+GG, said: “The Masdar Headquarters will set a new paradigm for the way buildings are designed, constructed and inhabited. The project represents the perfect integration of architecture and engineering, resulting in a dynamic, inviting building that outperforms any other structure of its type in the world.”

When complete, it will house residential units as well as workplaces for start ups. The complex will be built from sustainable materials and feature integrated wind turbines, outdoor air quality monitors and one of the world’s largest building-integrated solar energy arrays. The Masdar HQ has been designed to cut 70% of water usage from an average building of its size.

Groundbreaking for the whole development, which was masterplanned by Foster + Partners, took place in at the beginning of last month. Fosters will also design a University facility. In January, the scheme received a government grant of $15 billion, the largest of its kind. The City is intended to be powered fully by CSP and waste-to-energy conversion. Construction of Masdar City is due to complete in 2016; the ‘headquarters’ is set to be finished by the end of 2010.

Masdar HQ is built around the shapes of cones and flat planes. The idea and structure was inspired by palm trees, adept at creating oases and retaining moisture within the average 39 degree Celsius summer heat, architect Gordon Gill told Building. The cone and roof structure shades the water from the fountains below, effectively creating a microclimate.
The cones are chamfered at the top and the rush of air over the top creates negative pressure, drawing cool air from the subterranean level through the six-story space. The top of each can be closed off to help provide cross ventilation or in the case of a dust storm.
Meanwhile, the cones themselves, being made from glass angled at 15-22 reflect between 15-20% of the light, crucially reducing thermal gain while letting sufficient light in from beneath the shaded roof to keep the place bright. The cones are at the optimum nine metres apart which allows diffuse light to reach the whole building.
The shape of the cone also adds efficiency to the use of the structure, minimising their extent on grade A office spaces. From an aesthetic point of view, the view from the gardens through the cones to the ground floor fountains will be memorable.
Another key sustainability aspect of the building will be its building method which is intended to be carbon neutral. The PV roof will be built first to provide power for the rest of the construction process as well as shading the builders during their efforts. Possible next steps might include fitting a crane to the downside of the roof.
Gill confirms that a host of engineers worked on the project and that it is based on "basic ideas of energy movement."