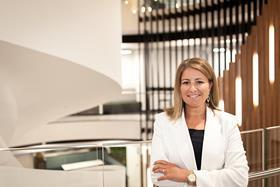 Annual revenue for the year ended 30 September 2017 in the consulting behemoth’s design and consulting services operation was $7.8bn (£5.9bn), down 1% on 2016, while its construction arm posted a 15% increase in turnover to $7.3bn (£5.5bn). Gross profit margins improved slightly in both businesses to 5.2% and 1.3% respectively.

The firm said it was anticipating earnings before interest, depreciation and amortisation next year of $910m (£690m), up 10%.

The firm recently confirmed it wanted to extend an initiative under which it has acted as investor and developer on a number of schemes in the US over the past four years to the UK and Europe.

Aecom Capital, as the venture is known, has already invested in 17 schemes in the US, with a development value of close to $5bn (£3.8bn).

Lara Poloni (pictured), Aecom’s new boss for Europe, the Middle East, India and Africa, told Building last month there was a deficit in terms of the funding available, particularly for infrastructure projects, “so we have a unique ability to create some of the projects and bring to the table schemes that can make a difference”.