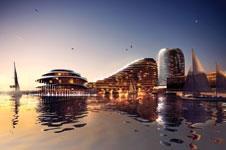 UAE developer Aldar faces a funding gap of up to AED6.5bn ($1.76bn) over the next two years, an analyst has warned. The news comes after Aldar announced its first ever quarterly loss, totalling over 500m dirhams for the fourth quarter of 2009.

Saud Masud, analyst at investment bank UBS said in a note: “Aldar may face a liquidity funding gap over the next 24 months. Gap funding may be addressed via further government support, asset sales or capital markets, hence further leveraging of the balance sheet and/or shares issuance cannot be ruled out.”

Receivables, or money from units sold, make up 56 percent of Aldar’s total liquidity, according local paper Arabian Business. It said that if the receivables expected materialise and revenue from the sales of infrastructure, such as the AED9.7bn for the sale of the Yas Marina Circuit to the Abu Dhabi government, this could be enough to ensure that Aldar would break even.

Aldar has slowed down the pace of development of its flagship project, the £13bn Al Raha Beach scheme, which amounts to building a city for 120,000 people on the outskirts of Abu Dhabi’s city centre. The developer has a joint venture with Laing O’Rourke and although both sides deny it has been terminated, it is widely thought to have been reduced in scope.