Westminster council’s decision to reject a 19-storey office and retail development in Paddington has been overturned by London mayor Sadiq Khan.

The council said in January this year that the 85m tall Allies and Morrison-designed tower, adjacent to the A4 Westway and Microsoft’s London office, would have a “significant impact” on surrounding heritage assets. 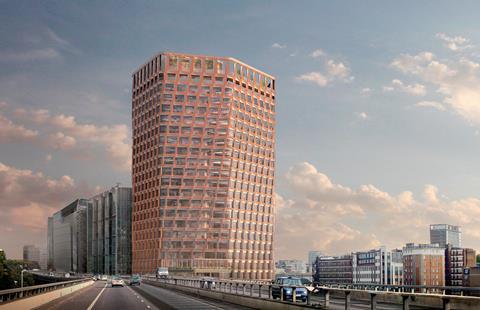 But the development at Five Kingdom Street has been given the all clear by City Hall after developer British Land agreed to stump up an extra £12.6m in contributions to the council’s affordable housing fund on top of the £1.8m previously agreed.

The developer has also promised to achieve net-zero carbon emissions during construction, and will provide more affordable workspace for businesses, improve some local roads and install at least £1m worth of public art at the site.

The scheme will be 25m taller and provide nearly double the floorspace of a previous Allies and Morrison-designed proposal for the site which won approval back in 2010.

It will be built on a former Crossrail site containing a large space intended to be used for train sidings, which will now be used as a leisure and retail space and an auditorium.

Ramboll is on the project team as energy, structural and MEP consultant.

A main contractor has not yet been appointed.

Khan yesterday agreed to move City Hall from its river Thames setting near Tower Bridge to a new home called The Crystal in Newham at the Royal Docks drawn up by Wilkinson Eyre.

Designed by Foster & Partners, the GLA’s current building was opened in 2002 by the Queen. Khan said the move, due to be completed by the end of next year would save more than £60m over the following five years.