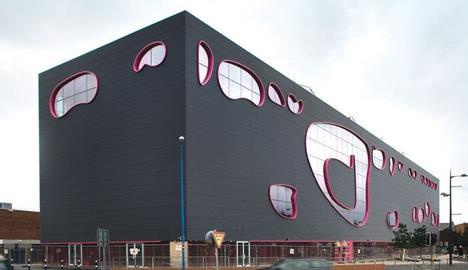 The scheme was saved by a £1.6m government grant after it went into administration in 2006 and was taken over by Sandwell Metropolitan Borough Council.

The building, which is a key component of the regeneration of West Bromwich, features a theatre and art gallery as well as offering office and event space, a cafe bar and state-of-the-art recording studios.

The studios, installed by Major Key Studios, will be used by students on music foundation degree courses at the University of Wolverhampton as well as offering facilities to local groups.

Although entry to the building is free, the art gallery will carry an admission charge of almost £7. For the next few weeks only, free entry will be granted to 1,000 selected local residents of Sandwell to enable them to roadtest the exhibitions.

David Clarke, programme director at The Public, said to the BBC in justification of the admission charge: “It's a new era, I think, in which we will be expecting buildings like this to make their way financially.”