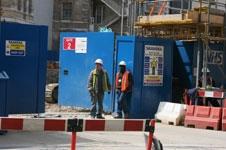 Scottish Labour leader Iain Gray has called on the Scottish government to take urgent action to address “the crisis in the construction industry”.

The politician referred to a survey indicating the value of public investment had fallen almost £2bn since the SNP came to power as evidence for the claims.

According to new analysis of figures published by the Scottish government’s Infrastructure Investment Unit, the value of public investment projects in the pipeline fell from £1.3bn in 2007 to £303m in 2008 and is expected to be £508m in 2009.

Gray said: "The slump in the construction industry is deeper than it would otherwise have been, and more jobs have been lost, because the SNP have turned off the tap of public sector investment.

"At a time when the Scottish government should be doing all it can to protect jobs we are seeing a massive fall in public investment projects.”

However, finance secretary John Swinney described Gray’s comments as “misleading nonsense” as the figures only included PFI/PPP contracts and failed to take account of conventional projects such as the £445m M74 completion and the £120m Low Mos Prison.

He said construction jobs in Scotland rose 1.4% in the year to March 2009.

Figures from the Scottish Building Federation, out last week, suggested more than 900 construction trainees and apprentices have been made redundant in the past year.