Another Salford tower to start this month

Renaker will start work on a 50-storey residential tower in Salford later this month.

The scheme (pictured), designed by architects OMI, will consist of a main tower, a four-storey podium building and a two-storey basement car park, along with two new roads. 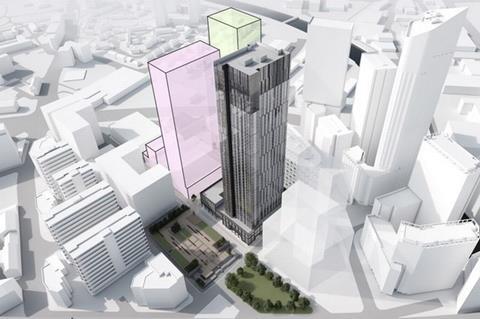 OMI has designed several residential blocks in Salford, including the adjacent 55-storey One Heritage Tower, which Laing O’Rourke is due to start building this year, and the nearby One Greengate, completed by Renaker in 2015.

The latest scheme, called Greengate HJ, will include a park on the site of a former burial ground for the poor where at least 16,000 people were buried between 1800 and 1855.

The graves were discovered beneath a car park during enabling works, with the first two months of construction devoted to archaeological investigations.

Construction is expected to take around four years with two further towers set to be built during later phases of the scheme, which is situated in the Greengate area of central Salford.

The development has courted controversy for containing no affordable housing and the location of its three towers in the medieval heart of the city.

Renaker also outlined its covid-19 safety procedures for the project, which include asking all site visitors and staff to avoid public transport and commute to the site “by foot, on a bike or by car”.

It said public transport will “only be advocated as the preferred way to travel to the site when the Covid-19 restrictions have been lifted and it is deemed safe to do so”.