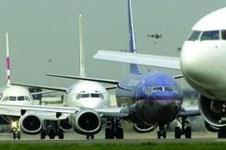 Greenpeace today launched an architecture competition to design an “impenetrable fortress” on land destined for Heathrow's third runway, as part of its campaign to block the development.

The 0.4ha site in the village of Sipson was bought last year by the environmental group, which then distributed ownership of it to people across the world. The site is now owned by more than 60,000 people, creating legal complexities for the government in proceeding with the airport expansion.

Now Greenpeace plans to build a fortress on the site to defend it from bulldozers and bailiffs, and has assembled a panel of celebrities and architects to judge a design competition.

Once the winning design – which must be as close to zero-carbon as possible – is chosen, Greenpeace will raise funds to build it and construction will begin immediately, unless the runway plans are dropped.

Greenpeace executive director John Sauven said: “This is a competition to design what could become the next frontline in the fight against climate change. We can raise the funds to build it, now we need the right design.

“We're looking for a structure that is immovable and allows local residents and seasoned environmental campaigners to peacefully block the diggers. It might be underground, it might be overground, it might be both, that's up to the panel of experienced judges from the worlds of architecture and activism to decide.

“This is a battle of the architects. The other side has a budget of billions but in the end only one structure will be left, and it won't be a new runway.”

Atelier One's Neil Thomas said: “This has to be one of the most fascinating design briefs ever put out to competition. Architects are being asked to design a structure that will become iconic the moment it's finished.

“Then, very soon after completion, it could face the possible threat of bulldozers and bailiffs trying to tear it down. We think they'll fail. British design is in a very exciting period at the moment, so it's with some relish that we judges await the entrants.“

The contest is open to architects, architectural students and architect-led mixed disciplinary teams, with engineers, artists, landscape designers, sculptors and other professionals aligned with associated bodies encouraged to collaborate and submit designs.

The deadline for submissions is 23 April, with the winning design announced soon afterwards. An exhibition of the entrants will be held in a central London gallery in early June.

The competition brief can be downloaded here.