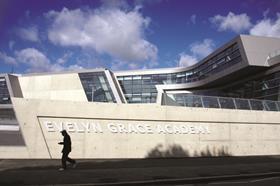 The award of the Stirling prize to Zaha Hadid’s £36.5m Evelyn Grace Academy in London has been branded “politically dumb” by a former RIBA president.

George Ferguson, who led the RIBA from 2003-5, said he was “angry” at the decision to award the prize to a school for the first time, at a time when spending on school architecture has come under heavy fire from the Conservative-led government.

At £3,300/m2, the Evelyn Grace Academy is almost 40% more expensive per m2 than the average cost of a secondary school (£2,050/m2), according to research by the James Review.
Ferguson said: “[The project] shows you can build a very good school with a lot of money, which is not very politically astute at the moment.”

He added he believed the winning scheme was the worst for a decade, when Wilkinson Eyre’s Magna Centre in Rotherham won the award - which was also the venue for this year’s award ceremony.

Robin Nicholson, a senior partner at Edward Cullinan Architects and a former Cabe commissioner, also questioned the RIBA’s judgment. “As a profession we have got to do a lot more with less, so to honour such an expensive school at this time is a strange decision.”

But some architects welcomed the decision and claimed it was right for the RIBA to promote school architecture.

Ken Shuttleworth, founder of Make, said: “I think it’s a great decision and great at a time when Gove is attacking schools.”

Paul Monaghan, a partner in AHMM, the practice behind the 2008 Stirling prize-shortlisted Westminster Academy, rejected the suggestion the judges had allowed politics to influence
their decision. He said: “I’m familiar with the processes and I’m sure there’ll be no political pressure. I’m pleased a school’s won the Stirling prize - this amplifies the message that school design is important.”

The RIBA’s head of awards, Tony Chapman, said: “The Stirling judges all agreed that the Evelyn Grace Academy had done most for the evolution of British architecture and the built environment in 2011. It certainly did not win for political reasons - unless it is political to say that kids deserve the best.”