A manager at the manufacturer that sold combustible ACM panels to be used on the Grenfell Tower refurbishment warned colleagues two years before the fatal fire that the cladding was dangerous and a safer version should be sold instead.

Arconic technical manager Claude Wehrle’s warning came shortly after the firm’s US parent company had sought an assessment of the Reynobond PE panels produced in France and sold into the UK market.

Monday’s hearing was told that Diana Perreiah, the president of Arconic’s global building and construction systems business, had requested the assessment from the president of the firm’s French subsidiary, Claude Schmidt.

The assessment, produced in June 2015, said the firm’s Reynobond PE panels were “flammable” and had ”limitations given by the smoke production and flaming droplets.”

It added that the panels had a “maximal building height of 8m to 12m depending the country [sic]”.

At the time, around 3,000m2 of the panels were being installed on the 67m tall residential block in west London. 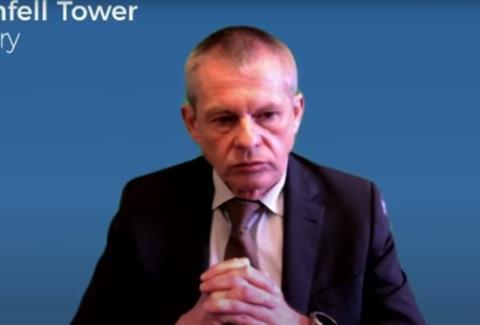 The first phase of the inquiry has found that the building’s cladding was the “primary cause” for the spread of the fire, which killed 72 people in June 2017.

In the same month that Arconic’s assessment was produced for its US parent, Wehrle had emailed colleagues to say that the panels were unsafe and should be immediately swapped with a more fire-retardant version called Reynobond FR.

Wehrle said: ”My Opinion: PE is DANGEROUS on façades, and everything should be transferred to FR as a matter of urgency [sic]”.

He continued: “This Opinion is technical and anti−commercial, it seems,” adding a smiley face at the end of the email.

Wehrle is one of three Arconic witnesses who have refused to appear at the Grenfell Inquiry because of French legal advice.

Schmidt said in his witness statement that Arconic continued to sell Reynobond PE for architectural use in the UK until 2017, eventually halting supply on 26 June 2017, 12 days after the Grenfell fire.

Schmidt told the inquiry that Wehrle had already “mentioned and expressed” the danger of Reynobond PE before the date of the email.

Counsel to the inquiry Richard Millett QC asked: “If it was dangerous, why were you still selling it?”

Speaking through an interpreter, Schmidt replied: “Well, I go back to something I’ve already said, and I go back to the same reply: there are lots of products that are on sale and that are sold every day, and… in a very general way, and these products may entail dangers or risks, and these risks and dangers can be controlled in various ways, in various manners.”

Millett then asked: “Did the management of Arconic choose simply to ignore Mr Wehrle’s warning that PE is dangerous in facades and substitute his view for something more commercial?”

Millett asked: “Was it that Mr Wehrle was a lone voice in Arconic who, by this time, was trying to tell senior management that the use of PE on facades was dangerous, but he was being ignored for commercial reasons?”

“Isn’t the truth here that Arconic knew that PE was dangerous in facades but continued to sell it in those markets where it could?” Millett asked.

The inquiry has already heard how, in a secretly recorded telephone conversation a week after the Grenfell fire, the firm’s UK sales manager Deborah French had told an employee at Arconic client Simco that the PE panels were kept on the market because of “cost implications”.

Arconic’s margin on the more fire resistant FR was around €5-€6 per square metre, but was €7-€8 on PE, which was by far the most popular of Arconic’s cladding products in the UK before the 2017 fire.

Schmidt also told Monday’s hearing that he had “quickly” read a BBC report in November 2012 on a fire at the Tamweel Tower in Dubai, which was wrapped in a similar type of cladding as that was used on Grenfell.

The article, which was shared internally and titled “Fireballs Fall to Ground,” said that the building’s cladding “may have been the culprit behind the blaze’s fire spread”.

The inquiry was shown an internal email by Wehrle in which he said that although the building’s PE cladding was not produced by Arconic, “all PE composites react in the same way….”

Asked by Millett why the firm had not simply attached a “health warning” when selling Reynobond PE in the cassette version used on Grenfell Tower, Schmidt replied: “I can’t answer. Well, I don’t believe that our competitors did it.

“Ten years later it is a legitimate question to raise, but at the time it wasn’t so obvious.”