Balfour Beatty and its JV partners Systra and Vinci have formally signed the deal with HS2 to build the £1bn Old Oak Common station.

HS2 named the consortium preferred bidder for the station (pictured) back in February, when it also picked Mace-Dragados as Euston Station builder.

While Mace-Dragados signed its deal the following month, the Balfour Beatty team was prevented from signing a contract following a legal challenge from losing bidder Bechtel.

Bechtel continues to allege that it would have won the contract, had HS2 not made blunders in the evaluation of tenders – while HS2 still insists procurement was carried out properly. 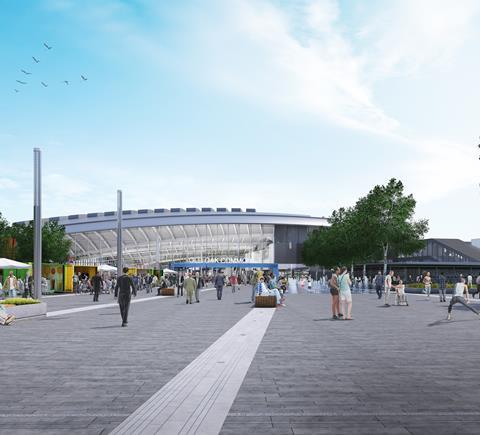 But the US engineer dropped its opposition to the contract being awarded last month, after being told it could be liable to pay more than £100m if it lost a court case with HS2 scheduled for October 2020.

Clearance has now been completed at the Old Oak Common site but enabling work contractors still need to carry out ground remediation.

When the Balfour JV does get on site, which is expected in the first half of next year, it will be responsible for construction and commissioning of the station in west London.

This includes delivery of six underground platforms, as well as eight more platforms on the adjacent Great Western Main Line.

In summer 2017, Balfour Beatty and Vinci were awarded two contracts to carry out tunnels and civils work in the Midlands, known as lots N1 and N2, in a deal worth £2.5bn.

At the peak of construction, the Old Oak scheme will see a direct management team of 140 people, overseeing a wider workforce of around 2,500.

Phase 1 of HS2 had been due to finish by the end of 2026 but in a report published earlier this month the railway’s chairman Allan Cook admitted the first phase was more likely to be finished between 2028 and 2031.